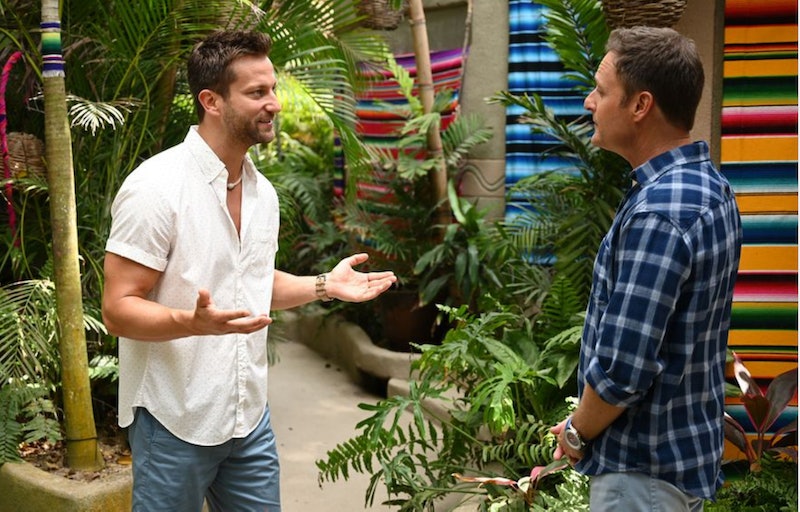 The king of Bachelor in Paradise has said Season 6 is the best the series has seen so far, and it sounds like this week's episodes have something to do with it. In the caption of a new Instagram post, Chris Harrison teased some Bachelor in Paradise drama that is ahead. He paired the caption with a photo someone snapped while he was in the middle of talking with a crew member on the BiP set. Whatever they were discussing must’ve been juicy: Harrison appears to be about as shocked as he was when he witnessed Colton Underwood try to escape his own season of The Bachelor.

Thanks to the caption, fans do not have to guess what information the host of Paradise was ostensibly receiving at that very moment. Harrison wrote,

“That look when they tell you two male models just got in a fight on your beach, Demi has a girlfriend back home, Blake is still here trying to figure out how he got himself into this mess and someone just ate the last shrimp taco....it’s a Monday...it’s Paradise @bachelorinparadise #BachelorInParadise”

Whoa, whoa, whoa. Way to bury the lede there, Harrison. Someone ate the last shrimp taco on BiP and we are only hearing about it now? Yeah, love triangles and budding romances make for good reality TV and all, but there really is not anything quite like a petty food-centric Bachelor Nation storyline. Give me all of the drama about who ate the last shrimp taco/who threw bologna at who/who ate a bunch of scallops on a drive home from a restaurant/who makes too many mouth noises when they eat pizza, please and thank you.

And what a thrill it will be to watch the other major BiP Season 6 moments that Harrison referenced in the aforementioned IG caption. There is Blake Horstmann’s post-Stagecoach dilemma. There is Demi Burnett’s relationship status. And there is a big ol’ brawl that happens right on the water that seems to spiral out of control pretty quickly.

When speaking with E! News last Thursday, Harrison confirmed that the Bachelor in Paradise beach fight is set to air this week. He continued, “Look, we have to draw the line somewhere and a physical altercation is where we draw the line. We don't mind if things get heated. There's a lot of Type A personalities, a lot of testosterone flying but it can't get physical and it did and we broke it up." Harrison did not spill the names of who was at the center of the fracas, but he did say that he believes viewers “will be surprised with how it went.”

Monday and Tuesday evening, there will be fresh episodes of what Harrison called the "best season [of Paradise]... we've ever had" in a recent interview with Entertainment Tonight. And in those fresh episodes, it really looks like the shrimp hits the fan.