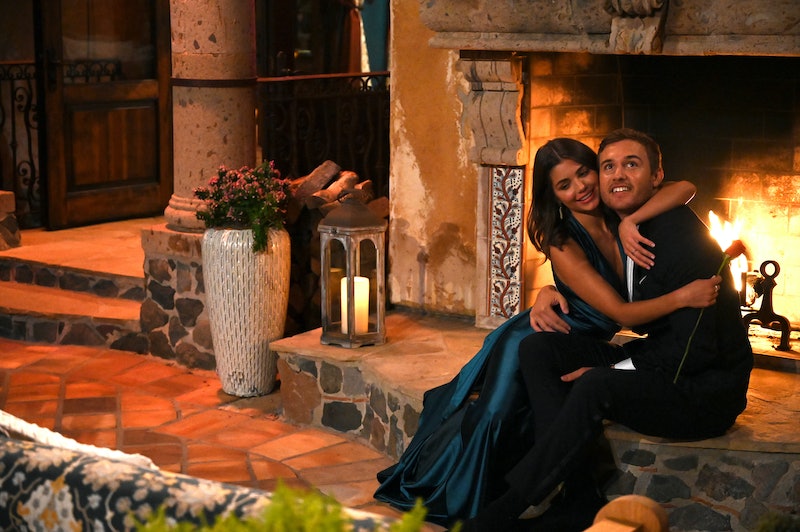 The Bachelor mansion might be taking a break during the next season of The Bachelorette. In a new interview, Chris Harrison hinted that Clare Crawley's season of The Bachelorette might relocate from California to a state that's reopening faster as the global coronavirus pandemic continues. This is just an idea from Harrison, and it's unclear whether or not ABC would support such a move in order to get production underway faster, but given the unprecedented nature of our current climate, anything is possible.

For his part, Harrison is eager to get the cameras rolling again as soon as its safe for the crew and cast to reconvene. "I don't know, maybe we have to get out of California," he said to EW. "The politics of California are not helping anybody at this point. Maybe you have to go to a state where things are opening up quicker."

Clare's season was put on hold due to the pandemic, and the shift in filming will affect the rest of the Bachelor Nation shows as well. However, Harrison is hopeful that if filming for The Bachelorette can get underway in June or July, the franchise can get back on track in time for a fall debut. "Our goal, first and foremost, is to shoot The Bachelorette, and if we can do that in the next three to four months, we're still fine," the host said.

He also added that if The Bachelorette filming wraps later this summer they "can push The Bachelor a little bit and get that done as well" and have the new season of that series wrapped by Thanksgiving. At the moment, the Bachelor franchise, like the rest of Hollywood, is in a state of limbo as productions remain shutdown. But Harrison remains optimistic that the show will go on — just not as quickly as he may like.

Clare, who was named the next Bachelorette on March 2, is keenly aware that her season is in an unusual position. The cast of men vying for her heart was announced prior to the shutdown, which has given her a chance to do a bit of snooping. In a recent interview with Entertainment Tonight, Harrison said that Clare revealed to him that she "totally" checked out the men who were cast in her season online.

Given the delay, the season is being at least partially re-casted, so hopefully she didn't get too attached to any one guy. And, yes, it does seem that Tyler Cameron's best friend Matt James will still be a contestant, despite Clare seemingly calling him out for using Cameo on Twitter before the season had filmed. (Matt's Cameo appearances were all for charity).

"As far as I know, [he'll still be a contestant]. I mean, I have not heard anything different," Harrison told ET. "I mean, I don't know if he wants to do this after quarantine, who knows? But as far as I know, yes." He further clarified that the Bachelorette wasn't "calling anybody in particular out," claiming she's "not mad at Matt."

Despite Harrison's optimism, The Bachelorette still has a long way to go before it makes it to viewers' screens. With everything from the show's location to the cast in a state of flux, it's anyone's guess what Clare's season will look like. But one thing is certain: Bachelor Nation will be eagerly waiting to see what happens next.