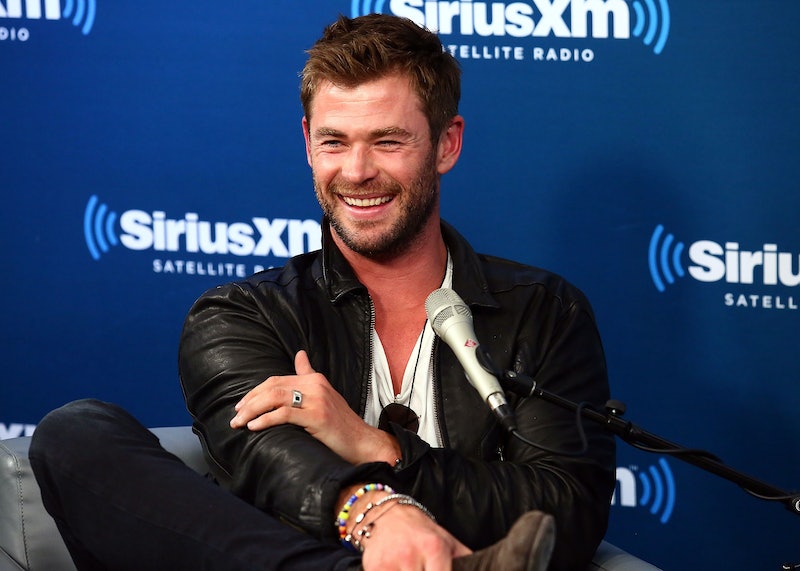 If you need a pick-me-up, you definitely should watch Chris Hemsworth's video riding a roller coaster at Shanghai Disneyland. The Avengers: Endgame actor was kind enough to share the footage of the hilarious experience with his followers on Wednesday. As you'll seen be able to see for yourself, Hemsworth reacts to a thrilling attraction just like most everyone else.

Along with some friends while promoting the new Avengers film that drops on April 26, Hemsworth hopped on the TRON Lightcycle Power Run roller coaster. He captioned his Instagram post, "Disneyland Shanghai for @avengers. Squeezed in a little rollercoastering #notafraid."

In the beginning of his video, you can watch as the actor and his group exit the ride. "The TRON ride — woohoo!" Hemsworth declares. Then, he says, "It wasn't even that scary, was it?"

As you may be able to guess, Hemsworth was definitely being sarcastic about the ride not being "scary." Immediately after saying he wasn't afraid whatsoever, the video shifts to footage of the star on the roller coaster literally screaming his head off. It's nice to know that even Hemsworth, who plays superhero Thor in the Marvel films, can be shaken just like the average person by a roller coaster.

This isn't the only memorable experience the Australian actor has had at a Disney park. During an April 8 appearance on Jimmy Kimmel Live! with a few of his fellow Endgame costars, Hemsworth opened up about sneaking his eldest daughter, India Rose, onto a ride at Disneyland Resort's Disney California Adventure park.

The incident occurred a couple years ago, in which Hemsworth really wanted his now 6-year-old daughter to ride the Twilight Zone Tower of Terror. This was before the attraction was turned into Guardians of the Galaxy — Mission: Breakout! He explained, "I took my daughter on it a couple of years ago when it was previously called the Tower of Terror or something." However, she didn't meet the height requirements, so Hemsworth improvised in order to get her onto the ride.

"She was really upset," he said about her not being tall enough. "And I was like nah, forget this. Come here." So what did he do? Oh, you know, he jammed some candy bars into her shoes — for real. As he told host Jimmy Kimmel,

"I grabbed a couple of Snicker bars and slammed it in the back of her shoe under the heel."

Right after, the DCA Cast Member working the attraction allowed them onto the ride, because apparently Snicker bars make you taller. Unfortunately, Hemsworth quickly learned why height requirements exist, especially on a thrill ride like ToT, which drops you up and down repeatedly.

"We're at the top and I'm looking at her and she's strapped in and the seat is massive on her," he explained. You can probably imagine what happened next. Yep, India came out of her seat during the ride. "[I] grab onto her, she's like screaming the whole way down," he said. "I was like maybe there's a reason there's a height sign. So, don't do that. She's fine, she's well. I'm her hero."

Hemsworth actually faced some criticism for breaking the height rules, especially because they exist for safety reasons. That said, other people found his story funny. Whatever the case, it seems like he learned his lesson, so here's hoping he never shoves candy bars into his kids shoes for this purpose ever again, especially if they're too short to ride the TRON roller coaster.