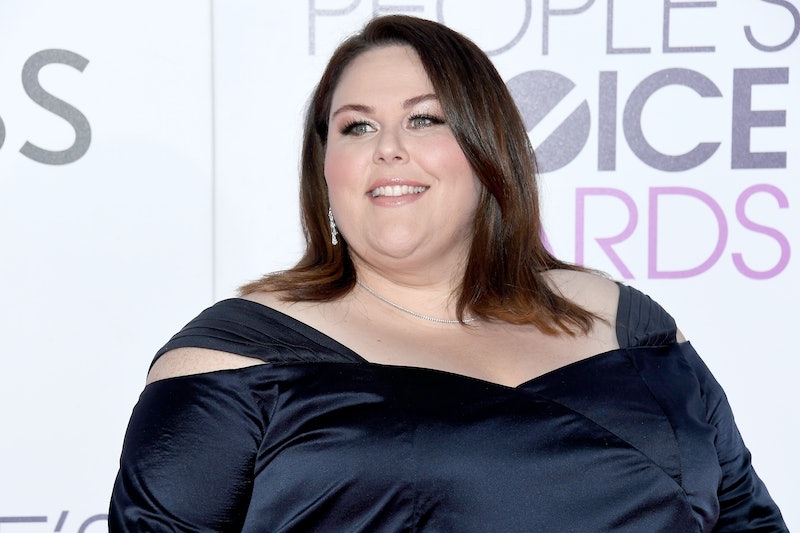 On April 19, People Magazine released its 2017 World's Most Beautiful issue. Pretty woman Julia Roberts procured the cover for the fifth time, and the magazine is full of beautiful, accomplished celebs. For me, though, there was one particular standout: Plus size actor Chrissy Metz, one of the few visibly fat people who has ever been on the list. While it was nice to see her included, she should have been on the cover.

People's World's Most Beautiful issue first launched in 1990 — badass Michelle Pfeiffer nabbed the first title. Since then, celebrities like Jodie Foster, Cindy Crawford, Beyoncé, Angelina Jolie, Lupita Nyong'o, Leonardo DiCaprio, Tom Cruise, and Drew Barrymore have joined the ranks. These celebrities were not only celebrated for their looks, but for overcoming personal struggles and supporting charitable causes.

Yet in the past 18 years of titular awards, not one plus size or even moderately "curvy" woman has been awarded with the top honor, while thin women have been awarded many times over. As previously mentioned, this is Julia Roberts' fifth time appearing on the cover, which means she represents one-third of the total appointees. Michelle Pfeiffer and Jennifer Aniston have also gathered two covers each. Sure, these women deserve celebration — but in all these covers, why couldn't a fat woman make it there at least once?

Many of the women who've graced previous covers have proven an inspiration to People's readers. In 2007, Drew Barrymore mentioned going to therapy in her interview long before it was socially acceptable to do so. In 2003, the year after Halle Berry became the first African American woman to win the Best Actress Oscar, she also became the first woman of color to receive People's Most Beautiful title. Julia Roberts is now second oldest to receive this honor. People has made strides toward acknowledging and valuing people that other publications have not, but bigger women still lack representation and visibility.

By putting a plus size woman from the cover, People could inspire the chubby girl who's picked on for the contents of her lunchbox at school, the teen who sits at home on prom night because she couldn't find an inexpensive dress that made her feel glamorous, or the plus size millennial who scans the covers in line at Duane Reade. No, we don't need magazines to reinforce our worth as human beings. In fact, the whole idea of ranking women and men by attractiveness is fundamentally flawed. But sometimes, it's nice to have a reminder that those that look like us are beautiful, too.

In my opinion, Chrissy Metz would have been the perfect candidate — not only because she's beautiful, but because she's visibly fat and could show that the two don't have to be mutually exclusive. Metz has never denied the fact that she is big. She admits, "fat was like a cuss word growing up," as it is for most of us bullied by the term, but she never tries to hide her size — even though her character has come under fire for having a weight loss narrative on the show.

Yes, I am definitely stoked that Metz was included at all — having a woman of her size in a magazine dedicated to celebrating beauty is cool. In the issue, Metz is given a small part of one page, and is recognized along with the rest of her cast. Though it's nice that People acknowledged this plus-size role model, it would have been powerful to see a woman of her size and unapologetic fatness declared the most beautiful.