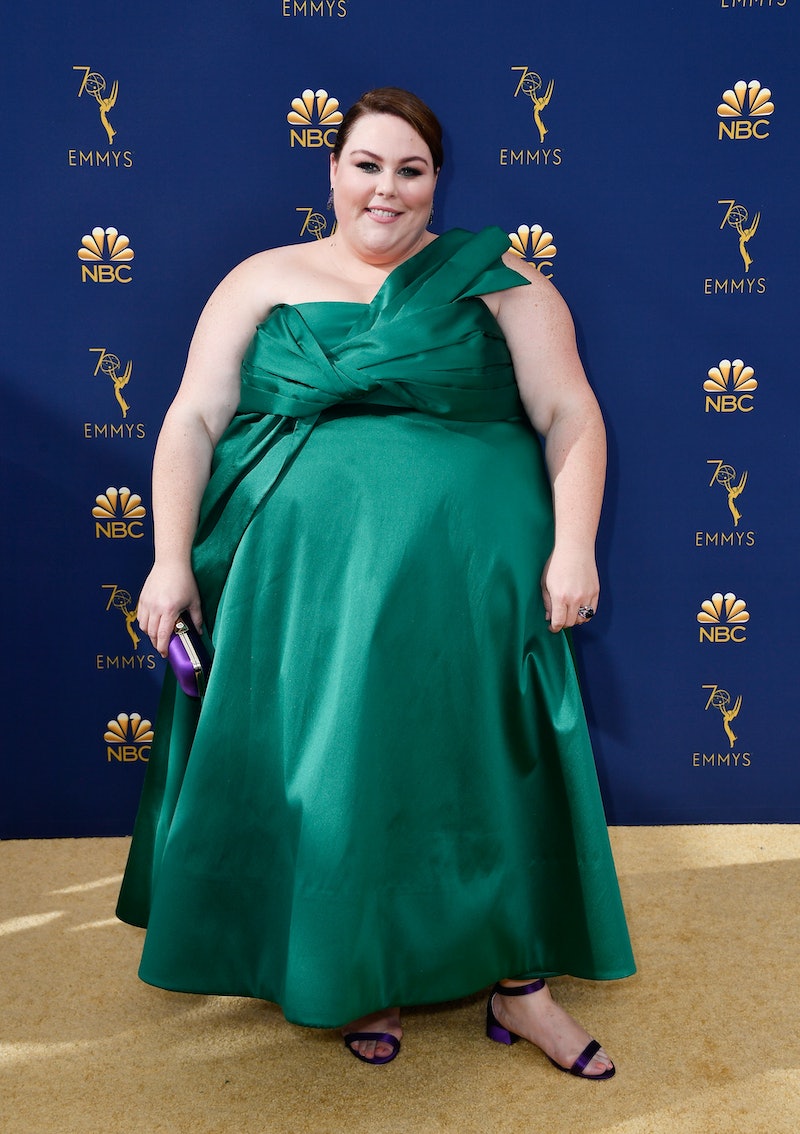 Much like her This Is Us co-star Mandy Moore, Chrissy Metz was snubbed by the 2018 Emmys. Arguably the series' breakout star, Metz did not receive a nomination for her work as Kate on the beloved hit show. Fans could argue all day and all night over this egregious critical injustice. That said, Chrissy Metz 2018 Emmys dress was as awesome as her acting. The one-shouldered, emerald green gown, which featured bow detailing on the bodice, was one of her biggest red carpet wins so far.

Metz looked so terrific that not being nominated didn't seem to spoil her evening. All you had to do was take a look at her infectious, ear-to-ear smile.

Metz's dress, which hit at the ankles and showed off her strappy purple flats, was a rich, bright shade of green. It popped against her fair skin tone.

Fans will recall that she wore a deep teal, floor-length, and short-sleeved dress with some beading on the bodice and along the hem to the 2017 Emmys. The lacy dress was a custom Lela Rose number and Metz even declared it made her feel like a princess when wearing it during her red carpet interview. It was a fashion "Wow!" moment for Metz. She followed it up a year later with an equally as smashing look.

For this year's ceremony, Metz wore her hair swept to the side and off her shoulders and neck in an updo. Wearing her hair up was a perfect way to show off the dress' bodice detail.

Metz's makeup matched her jewel-toned dress — she rocked rich, green smoky eyes. Her lips were pink in the softest, most matte way.

Metz's outfit was a winner. She looked beautiful when paired with Sandra Oh and her ruby red column gown. Both actors rocked those gem tones.

Metz's green garment was one of the freshest of the night. Notice that her ankle strap heels matched her clutch. The purple absolutely popped against her dress. What an unexpected but high fashion pairing.

Last year's dress was like a starry, midnight blue sky. Metz went with a smoky eye and it matched her dress. It was quite the sultry pairing and Metz absolutely owned it. She has a pattern and that's matching her eye makeup to the color of her dress. It totally works for her.

BTW, did you notice her statement pinky ring? At first, it seemed subtle. But once it grabbed your eye, it became an wow-inducing accessory that totally accented the deceptively low key dress.

Metz slayed an LBD at a 2016 Emmys event, as well. A black dress, strappy heels, and crimson lipstick are the epitome of Old Hollywood glam. Metz made them her own.

The actor has certainly been one to watch at Hollywood red carpets for awards ceremonies. Fans are always clamoring to see what look she will go with. She's a stunning and curvy woman who can always be counted on to work it.