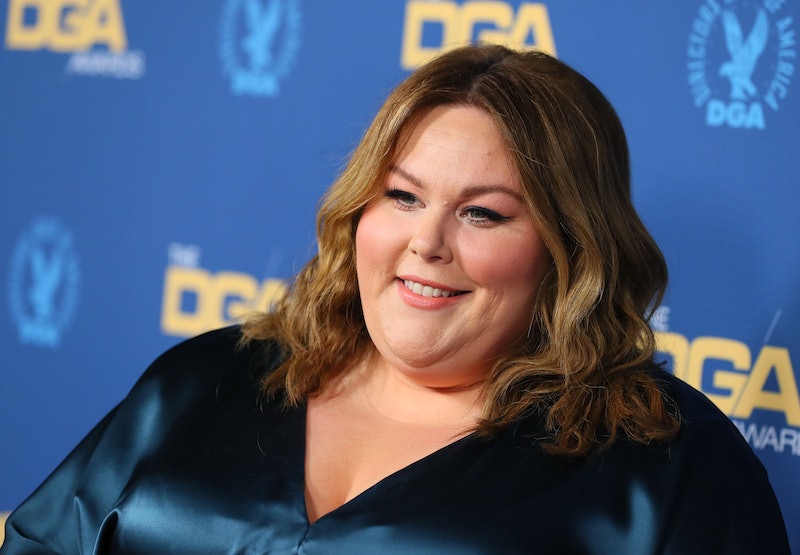 After starring on This is Us for for seasons, Chrissy Metz is releasing an album. Despite only announcing the record — due out later this year — in January, Metz has been working on it all while filming her hit TV show and promoting her new film Breakthrough. "I have been writing for the past year, whenever I have time I got to Nashville and have been doing some songwriting," Metz told Access Hollywood. At this Sunday's Oscars, she'll give fans a preview of the solo artist she's poised to become.

Of course, the Oscars aren't the first time the actress has demonstrated that she's a double-threat. Metz's This Is Us character, Kate Pearson, is an aspiring singer. And in April, Metz performed with a supergroup of country music standouts — Carrie Underwood, Laura Alaina, Mickey Guyton, and Maddie & Tae — at the Academy of Country Music Awards. They sang "I'm Standing With You," the theme song from Metz's Christian drama Breakthrough, in which she plays the mother of a child who survives a fall into an icy lake.

Written by Diane Warren, it's the same song Metz will be singing at Sunday night's Oscars, though Warren recently confessed Metz was far from her first choice to sing the tune. "When I wrote the song, I wanted to get a major artist to do it, you know? I wanted to get Kelly Clarkson or Pink or Carrie Underwood," she said. "And the producer of the movie was like, 'No, we want Chrissy to do it.' And I go, 'but she's an actress.' I didn't know, I mean, can she sing?"

Apparently, she could sing well enough to help Warren earn her 11th Oscar nomination, making her the most nominated woman to have never won. ("I'm Standing With You" is up for Best Original Song.)

And it didn't take much for Warren to come around, anyway. A few hours later, producers played her a rough version of Metz’s vocals. "I was like, no, this is your song."

More like this
Austin Butler Recalls Lisa Marie Presley Showing Him Elvis’ Bedroom
By Jake Viswanath
You’ll Definitely Recognise Isadóra Bjarkardóttir Barney’s Mum
By Maxine Harrison
Lisa Marie Presley's Secret Granddaughter Was Revealed At Her Funeral Out Of Nowhere
By Jake Viswanath
Here’s Everything Coming To & Leaving Netflix In February
By Jake Viswanath
Get Even More From Bustle — Sign Up For The Newsletter
From hair trends to relationship advice, our daily newsletter has everything you need to sound like a person who’s on TikTok, even if you aren’t.