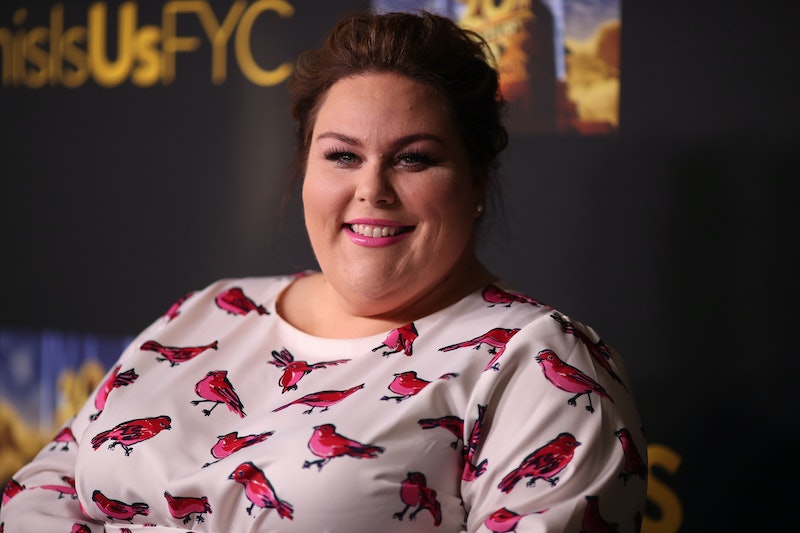 Netflix’s newest YA rom-com Sierra Burgess Is a Loser features This Is Us star Chrissy Metz in a vastly different role than Kate Pearson. In the film, streaming on the site as of Sept. 7, the actor plays the popular girl Veronica’s mom, a woman who cares more about turning her twins into pageant queens rather than being there for her eldest daughter. But one thing that stands out the most about Metz' supporting role in the film is how the character represents a little-discussed, harmful side to internalized fatphobia.

On NBC's This Is Us, Kate often battles body image issues, which strongly affects her self-esteem throughout the show's episodes. As such, Kate is a relatable character for many people who have similar struggles, and fans have frequently championed the series' for powerfully showing just how difficult it can be to be a fuller figured woman. From childhood flashbacks that show how Kate was often singled out for being the bigger one in her family, to the much talked-about scene where she slides on the scale, This Is Us has spent two seasons capturing the character's struggles in a realistic, thoughtful way that makes viewers everywhere feel deeply for Kate.

But Sierra Burgess shows a much darker side to body image issues. Veronica’s mom forces her daughters to eat healthy, unappetizing snacks like rice cakes, and paints food as the enemy. When she’s first introduced, she barges into Veronica’s room demanding to know why the teen is not at cheerleading practice. When Veronica tells her that she needed to skip to study, her mom tells her that if she doesn’t go to practice, the lack of exercise will make her fat.

Despite Veronica being the most popular girl in school and having boys like Sierra’s crush Jamey telling her how beautiful she is, the pressure to be thin and beautiful affects her self-esteem. Throughout the film, Veronica desperately wants to be accepted for who she is, rather than have to succumb to superficiality. This is part of why she relates so much to Sierra and forms an unexpected bond. In the film, Sierra longs to look like Veronica and, despite having a very supportive mom, feels like she needs to fit a certain standard of beauty to be accepted by her peers.

Veronica reminds her friend that even though she knows she does fit the idealized version of beauty that Sierra desires, she’s still unhappy, and having a mom dictate what she's allowed to do with her body in the name of beauty is repressive.

Metz’s role as Veronica’s mom might not feel as positive as Kate in This Is Us, but it’s meant to show how much harm body image issues can cause women and how mothers can unfortunately pass it on to their daughters. Veronica’s mom might think she’s helping her kids, but by obsessing over their bodies in the hopes of stopping them from having the same body image issues she has, she’s actually causing more harm.

At a young age, girls learn to be conscious of their body image and often have to deal with body shaming from their family. As Veronica’s mom, Metz’s character is a warning of how girls can end up with intense body image issues, and a reminder to viewers that there needs to be a larger conversation about how to stop perpetuating the cycle of body shaming.

More like this
Steve Martin Hints That He May Retire After 'Only Murders In The Building'
By Jake Viswanath
Amanda Seyfried Says She Felt Pressured To Shoot Nude Scenes At 19 Years Old
By Jake Viswanath
Someone Must Pay For What Happens To Bad Bunny In 'Bullet Train'
By Arya Roshanian
The Sean Bean Intimacy Coordinator Controversy, Explained
By Sam Ramsden
Get Even More From Bustle — Sign Up For The Newsletter