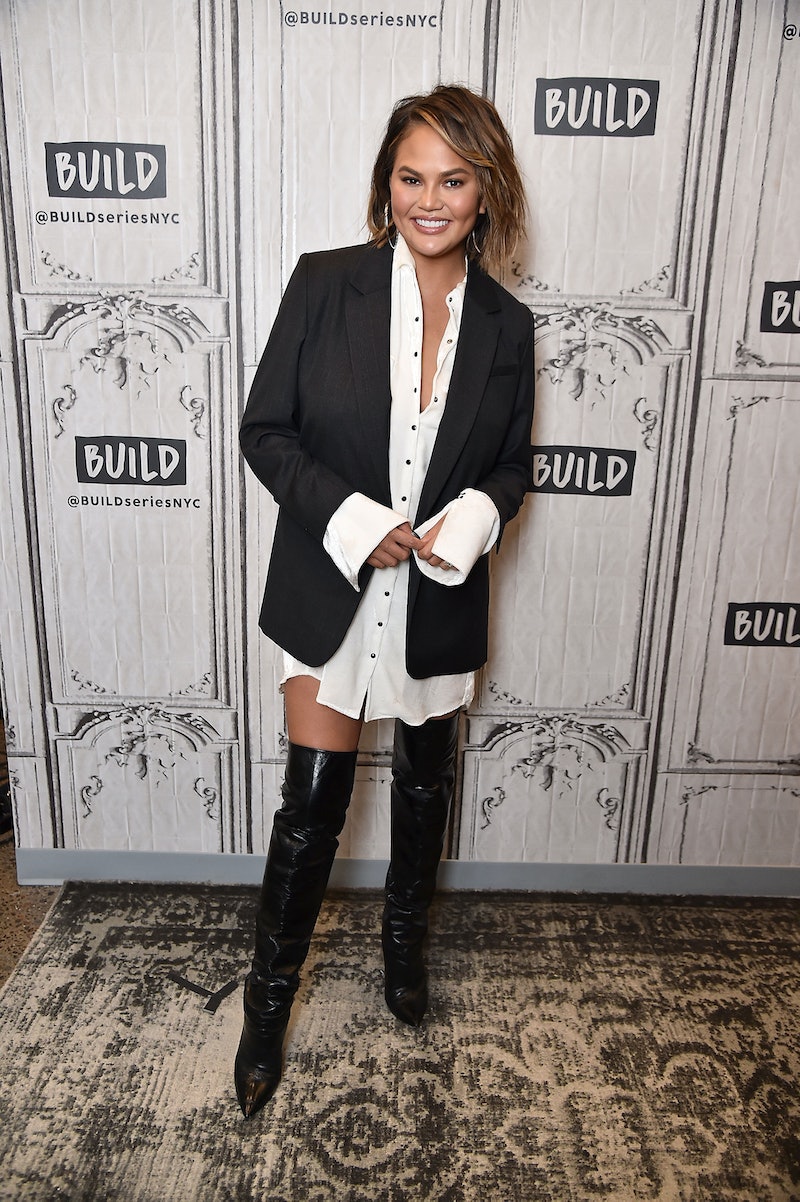 Chrissy Teigen doesn't tolerate trolls, and why should she? The celebrity has been mommy shamed, criticized for her attire, and chastised for her political views. Honestly, it's all kind of ridiculous, and most recently, Chrissy Teigen clapped back at a troll who said her short hair made her face look "huge," and it was everything. Why? Because Teigen can do whatever she damn well pleases with her hair, no one wants unsolicited hair advice, especially when hair pro Jen Atkin is their go-to gal.

According to Allure, Teigen appeared on Bravo's What What Happens Live with Andy Cohen this week, and for Bravo fans, she was the perfect guest. Not only is Teigen hilarious and unfiltered, but she's also a Bravo super fan after their own hearts. In fact, during the episode, Cohen surprised the star with an appearance by Real Housewives of Dallas star Leeanne Locken. The entire episode was a stand out.

Unfortunately, trolls couldn't leave well enough alone and took to Instagram to offer their unsolicited advice to the model. A user who calls Teigen beautiful goes on to ruin the compliment by telling the celebrity that she should grow her out again as she has a "round face." Then, she explains that the short cut makes her face "look huge."

Maybe not the best way to interact with someone, right?

Apparently, Teigen had time for the comment because she didn't let it slide. According to screen shots from Allure, the Bravo super fan responded to the Instagram user sarcastically explaining that her haircut was a mistake since each morning she wakes up and tries to ask herself what the user would do and how she can make the user happy. It was savage in a totally sassy way, and it was very Teigen.

A Chrissy Teigen clapback isn't exactly a foreign concept, either. She's kind of a low key pro at it, and given that those coming for the star are often times vicious, Teigen know how to clap with class. In fact, only a few months ago, a Twitter user decided to take it upon themselves to criticize Teigen's social media content complaining, "Menstruating, childbirth, and sex are natural. But that doesn't mean I want to see pics of it and/or celebrities like @chrissyteigen taking a bath or nursing. We get it."

First, maybe don't follow a celebrity who's content you don't like. Second, don't come for Teigen, especially when it comes to natural and totally normal things like breastfeeding. In her response, Teigen coolly responded, "I don't care to see grainy fireworks, Coachella selfies, or infinity pool pics but I let people live. Calm your tits and scroll on by."

The lesson here? Don't give people you don't know (and maybe not even people you do know) unsolicited advice abouy anything whether it's online or in-person. No one wants it, and if you do it to Teigen, there's a good chance you may be on the other end of a sassy clapback.