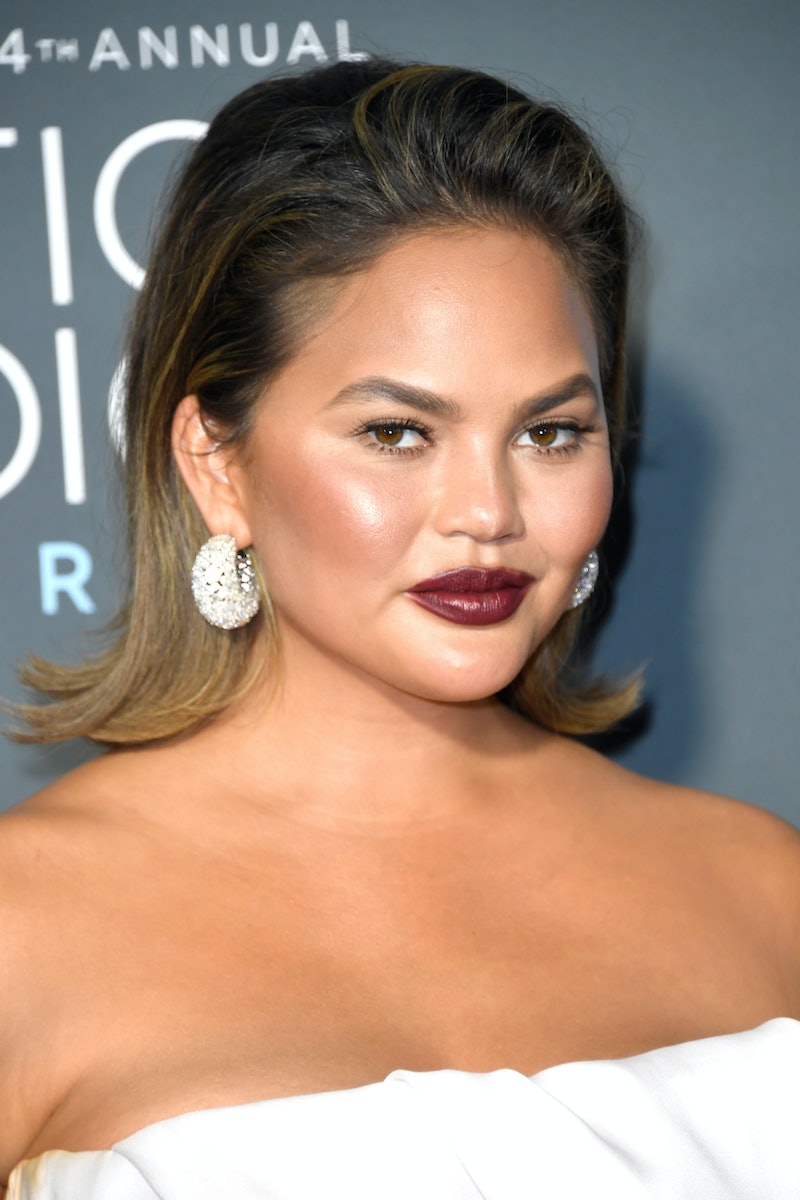 The Teigen-Legend family knows how to parent with a sense of humor. As pointed out by Us Weekly, Chrissy Teigen imitated John Legend's Super Bowl commercial on her Instagram Story, and the parody will make fans laugh. It's just the latest example of Teigen's expert trolling of Legend online, and it also pokes fun at idea that changing diapers is a big deal for either parent.

On Sunday, Legend appeared in a Pampers ad where he's changing his son Miles' diaper with the help of his daughter Luna. He's joined by a chorus of singing dads, who perform a rendition of a diaper-changing song. (For example, Adam Levine also appears in the commercial with his daughter Gio Grace.) At the end of the ad, Teigen walks in and interrupts the crooners, saying, "Must we do this every time?”

The models' cameo in the commercial isn't the only time she teased Legend, though. On Instagram, Teigen shared the Pampers ad with funny caption:

"Becoming a parent changes you. And you thought I was extra... #LovetheChange #StinkyBootyDuty"

She then made her own version of the commercial on her IG Story. "Just when John thinks he's cooler than me..." she wrote over a screenshot of Legend's ad. In the next video, Teigen is changing a diaper as well and singing, "Somebody's got a stinky booty, his name is Miles and he made a poopy, and mommy is going to clean it up." The cookbook author then turned around to reveal she was actually just changing a plastic doll's diaper. "I can do this," she joked.

Teigen clearly wasn't going to let Legend take all the diaper song glory, and her imitation is pretty funny as well. The song featured in the original commercial has been a staple in the Teigen-Legend household for a few years. Legend first sang "stinky booty duty" to Luna on Father's Day 2018, according to Us Weekly, but he brought it back again this year.

Legend posted the new advertisement to Instagram, captioning it, "Tiny audience... big impact." His post received plenty of love as well, and Taraji P. Henson chimed in the comments, "Adorable" with a few kiss emojis. And the All of Me singer wasn't the only dad to share the commercial with fans on Super Bowl Sunday. Levine also posted the video on Instagram, and The Voice judge wrote, "Every dad knows diaper duty is a right of passage."

Meanwhile on Teigen's account, many fans and friends reacted to the silly ad. Katharine McPhee commented, "10/10 would watch this on loop for 3 hours instead of the game," while Gwyneth Paltrow wrote, "Okay, this is funny." Busy Philipps found the video adorable, writing, "This is too cute."

As fans know, Teigen and Legend often share funny and adorable family updates on social media. On Sunday, Legend shared a picture of Luna holding a toy dog, writing, "His name is Coinky (sp?) according to Luna." And in late January, Teigen shared a goofy photo of Legend wearing a red wig with Luna. She wrote, "my babies are having too much fun without me" with a sad emoji.

The Lip Sync Battle host's imitation somehow managed to make Legend's funny Super Bowl ad even more hilarious. The spoof shows that these two love to joke around, and it's just the latest example of how the couple is able to make each other, and their kids, laugh.