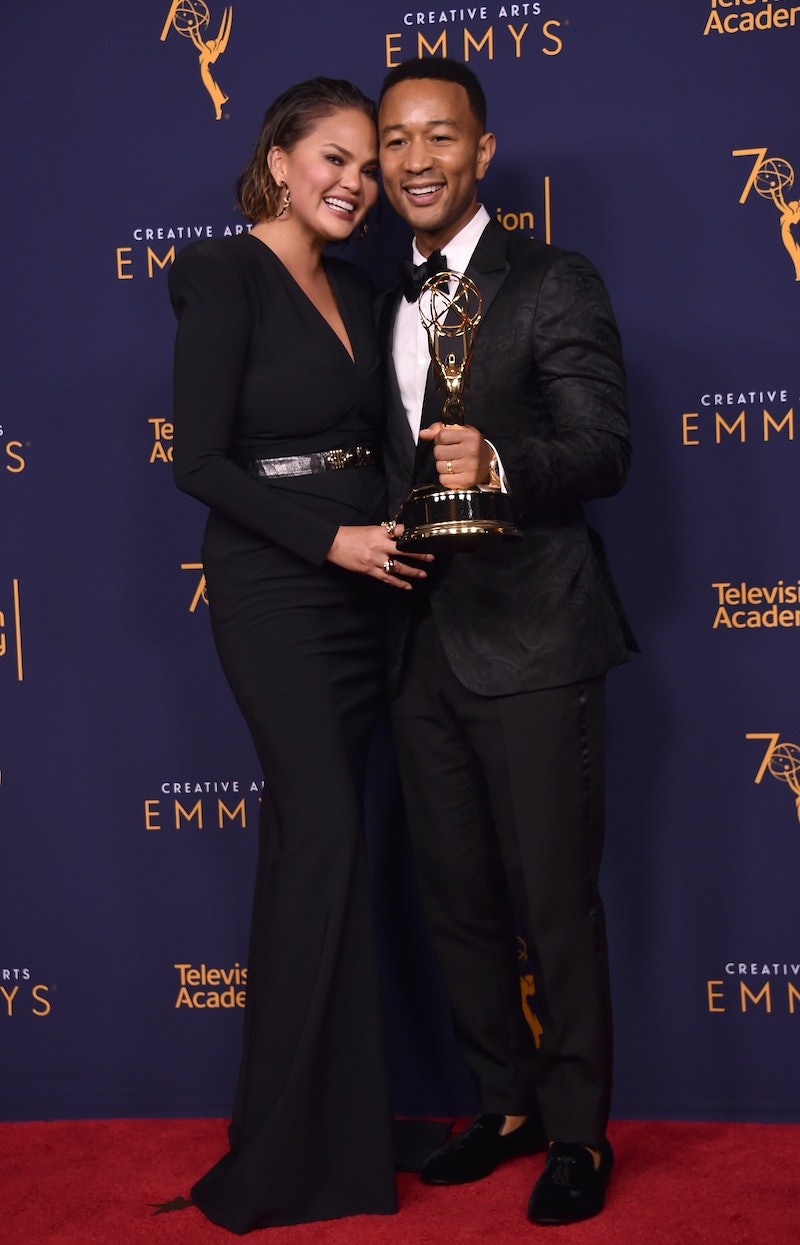 An EGOT, the coveted accomplishment when someone wins all the major awards in show business — an Emmy, Grammy, Oscar, and Tony — is kind of a rare win. Only 15 people have ever won an EGOT, and three of those 15 people only just earned the title on Sunday night. The first round of Emmys given out on Sept. 9 saw a few new names added to that exclusive list, including a longtime fan-favorite. John Legend won an EGOT and no one's more excited about it than his wife Chrissy Teigen.

During the second night of the Creative Arts Emmys, which was not televised, Legend took home an Emmy for Jesus Christ Superstar Live in Concert, the live TV adaptation of the musical, which premiered on Easter Sunday April 1, 2018. The original show premiered on Broadway in October of 1971 and went on to become a hit, performed year after year all over the world. While it never won a Tony, the show's newest reiteration on live television was nominated for 13 awards at the Emmys this year, including Outstanding Variety Special (Live), which is the category that gave Legend, an executive producer on the project, his long-awaited EGOT.

Not only is this a huge win for Legend, it's also a history-making one. He is the first black man to win this honor, and hopefully he won't be the last. Meanwhile, fellow his fellow producers (and original songwriters of the musical) Andrew Lloyd Webber and Time Rice also became EGOT holders on Sunday. Like John Legend, they were only missing the Emmy for their personal EGOTs.

Upon Legend's win, Teigen was of course elated about the whole thing, posting on Instagram, the "EGOT GOATS" — a picture of Lloyd Webber, Rice, and Legend together with their new Emmys backstage. She then proceeded to share a touching, intimate video of the moment when the musician added his Emmy to his shelf full of awards.

In the video shared to Instagram, Legend stands admiring it while Teigen quietly adds, "Perfect." Legend placed the Emmy on the top shelf, towering among his many accolades, including his Academy Award for the song "Glory" from Selma, his 10 Grammys won throughout his career, and a Tony for his work as co-producer on Jitney in 2017, thus achieving his EGOT status. To make it all-the-more cute, she captioned it, "And I say hey, what a wonderful kind of day." If that message sounds familiar, it's because those are lyrics to the Arthur theme song. Just because Legend is an EGOT winner doesn't mean Teigen is going to stop trolling him and his look-alike, Arthur.

Back in early July, the nominations for the 2018 Emmys were announced and when Chrissy Teigen and John Legend got wind that he could pull in an EGOT, they were understandably ecstatic. Teigen told Bustle about how Legend ran in from his workout, truly excited that Jesus Christ Superstar had been nominated. "He came running in from his gym session and was like, 'We did it! We got it!' and I forgot the Emmy noms happened and he’s just like, a little kid, he was so happy," Teigen said. "It takes a lot to excite John these days, he has an Oscar, but he was really excited and it was really cool to see." On top of that, Teigen tweeted all about it, sharing her father's proud reaction for all to see.

Jesus Christ Superstar has won a total of five Emmys thus far, and there are still more to hand out. Legend is also nominated for Outstanding Lead Actor in a Limited Series or Movie for his powerhouse performance in Jesus Chris Superstar, so by the end of next week, he just might have an EEGOT under his belt.

More like this
Twitter Is Freaking Out Over Rihanna’s 2023 Super Bowl Halftime Show Announcement
By Stephanie Topacio Long
The Spice Girls Just Dropped A Brand New Music Video
By Sam Ramsden
Everything To Know About Taylor Swift’s 10th Studio Album, 'Midnights'
By Grace Wehniainen and Jake Viswanath
Beyoncé’s Special Tribute To Sister Solange Was Both Touching & Hilarious
By Stephanie Topacio Long
Get Even More From Bustle — Sign Up For The Newsletter