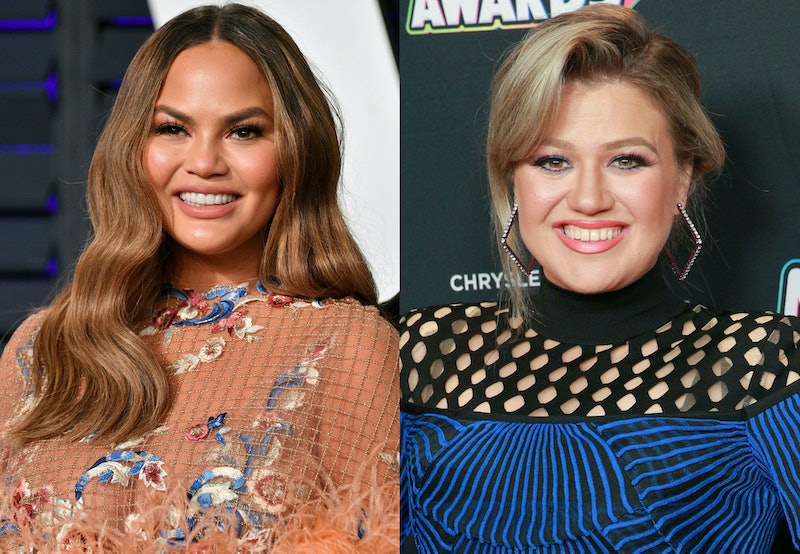 Here are two celebrities who need to be best friends, stat. On Tuesday, Chrissy Teigen and Kelly Clarkson had a Twitter exchange that their fans will find both relatable and hilarious. Their social media conversation all started with Teigen understandably wanting to FaceTime the singer, because why not? Well, the cookbook author quickly learned that just because John Legend is now a coach on The Voice, he doesn't have everyone's phone number, including his fellow coach, Clarkson.

With a new episode of The Voice Season 16 airing on Monday, Teigen wanted to chat with the "Since U Been Gone" singer badly, but her dreams were quickly crushed by Legend. As she tweeted late on March 19,

"I just asked john if we could FaceTime @kelly_clarkson and he said he doesn’t have her number?????????"

One would assume that Legend and Clarkson would be in each other's contacts list, especially since they sit next to each other on the NBC singing competition series, and, you know, they're coworkers. But, apparently, and as Teigen sadly learned, that isn't the case.

Don't worry, though, because the "Heat" artist is willing to give the Cravings: Hungry For More author her phone number — and under one absolutely relatable condition. Clarkson replied to Teigen on Tuesday,

"I will trade you my number for you cooking me a meal at some point in my life, because all your posts of food always look so damn good! #justsayin #bartersystem #dealornodeal"

All Teigen has to do is cook the musician a meal and she will have yet another hugely famous person's number in her phone. Do it, Chrissy. Do it. At this time, Teigen hasn't responded to Clarkson's request, but the chances seem pretty likely that she'll agree, right?

Seeing as Teigen has two cookbooks, is launching her own recipe website, and knows how to cook really well (have you seen her photos and videos of food on social media?), Clarkson's request totally makes sense and is very easy for Teigen to accommodate.

This actually isn't the first time Clarkson has expressed interest in Teigen cooking her a meal. All the way back in May 2016, the singer replied to Legend's "Mother's Day chacken" Instagram. The post showed Legend holding a platter of fried chicken on the special holiday, which Clarkson desperately wanted to taste.

How has it been almost three years and Clarkson has yet to eat with the celebrity couple? It seems that she's been wanting Teigen to cook for her way longer than the Cravings author has wanted the "My Life Would Suck Without You" singer's phone number.

Whatever the case, here's hoping soon enough the two can make each other's wishes come true — and they share their time together on social media for fans to enjoy.