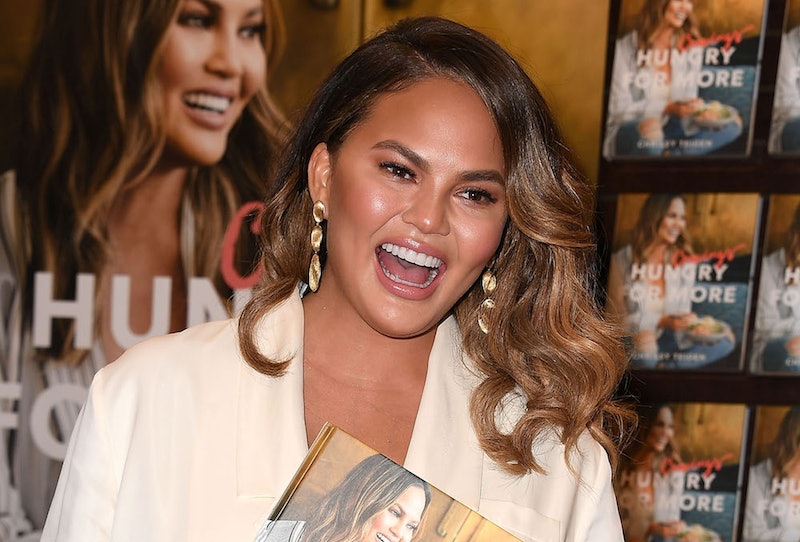 The internet’s BFF launched a recipe website, and fans couldn't get enough. Chrissy Teigen’s Cravings website crashed shortly after its launch on Monday, Nov. 4. On Twitter, Teigen gave her followers a glimpse of the moments that led up to the launch of Cravings by Chrissy Teigen. The website, an extension of her Cravings cookbooks, includes Teigen’s favorite recipes, guides that detail her favorite restaurants and cookware, videos with her children Luna and Miles, and much more. Teigen’s mom, Pepper, also has her own “Pepper’s Corner" segment, which features the matriarch sharing her own recipes and craft hacks.

To celebrate the moment the website went live, Teigen shared a video on Monday across her social media platforms that featured her husband John Legend and their two children. “We are so excited to welcome you to my brand new website,” Teigen says in the clip. “I’ve been wanting to do a website that’s a true community of people that love Cravings — love the cookbook, love the cookware — and just a place where you can see everything that is our family.”

She concludes in the video, “We’re so excited to have you. I’m very proud to do this for you, and John is proud to pay for it.” A flabbergasted Legend then says to his wife, “I’m paying for it?" Teigen then hilariously replies, "Yes."

Cravings by Chrissy Teigen is essentially a haven for fans of the cookbook author’s recipes and social media clips of her adorable children. A heightened version of her original WordPress food blog So Delushious (which she mentions briefly in the clip above), the website also allows users to create their own profiles to save their favorite recipes, leave comments, and submit questions to Teigen herself.

About two hours after the website’s launch, however, the website crashed due to presumably high volumes of traffic on the site. Pages on the website were either not loading properly or displaying an error page. On Twitter, Teigen shared a stock image photoshopped with her infamous Golden Globes expression that became a viral sensation in 2015. She captioned the photo, “working on getting the site back up!!! you crashed meeeee.”

Teigen first announced plans to launch a recipe website in February. She tweeted at the time, “after mannnnnny years of talking about it and muccccch work by many extraordinary beings, I am finally going to have a WEBSITE on the INTERNETS!”

In a press release for Cravings by Chrissy Teigen’s launch on Monday, Teigen said, as per Refinery29, "I've always loved interacting with fans, sharing ideas, recipes, and even my failures in the kitchen on social media. I realized there was so much more I wanted to share so here goes a longer version with no text cap, no rules, and A LOT MORE FOOD!"