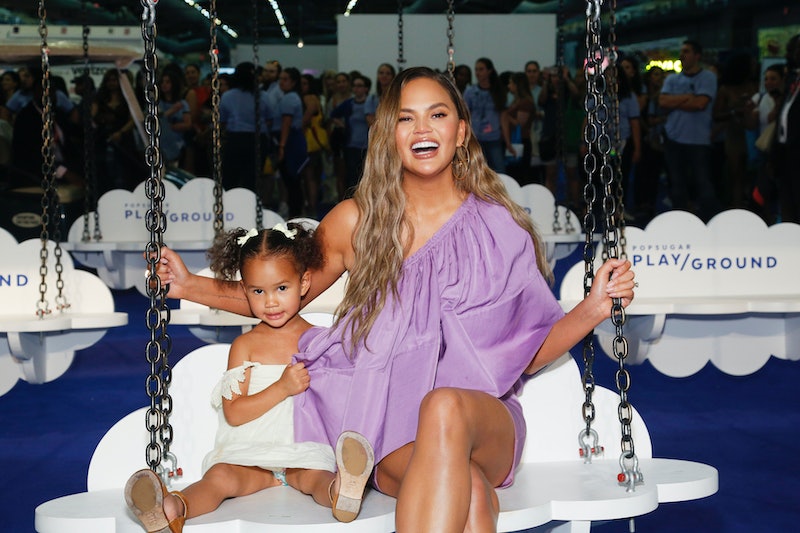 Luna Simone Stephens is going to be an even bigger star one day and here's the proof. Chrissy Teigen praised Luna's comedic timing in a recent interview with Entertainment Tonight. For those wondering if the eldest child of the Bring the Funny star and John Legend really is as funny as she seems on social media, the answer is a definite yes, according to Teigen.

"Luna has amazing timing," Teigen gushed about her daughter. She continued,

"She is so verbal... Obviously everyone's kids say something and you're like, 'Where did you get that?' But with us, it's like, 'How did you learn that tone or phrasing?' She phrases things really well and she, like, holds a beat to give the punch line with things. It's really interesting. But yeah, she's so funny."

As avid followers of both the Lip Sync Battle star and Legend know, Luna isn't afraid to speak her mind. She always seems to have the perfect response to questions and phrases things in the funniest way, all while being very serious in her answers, including that time the 3-year-old gave strong opinions about boys and girls.

Teigen explained to ET that Luna constantly challenges the cookbook author and The Voice coach in a good way. So much so, Legend loves having conversations with his little girl.

"She's constantly debating and John loves that 'cause he talks to her as if she's like a counterpart. I mean it's amazing," Teigen said about Luna. "... Every day there's something... If I say something silly, she'll be like, 'Oh my God, you're such a goose.' I'm like, 'Where did you get that?'"

In May, Legend also opened up about Luna's funny side. He told ET,

"She really is [funny]. She's got a lot of Chrissy's personality. She even knows she's funny already. She plays for laughs sometimes, which is hilarious."

The EGOT winner continued telling ET that Luna "does all kinds of funny things," including telling stories and "acting out scenes all the time." As he said, "She's very entertaining." If you need further proof of Luna's talents, watch the video below of the toddler in which she informed her grandmother, Vilailuck Teigen, about how she knows "everything."

Speaking of knowing it all, Teigen told ET Luna absorbs "everything she reads" and uses what she learns as inspiration. The Cravings: Hungry For More author explained,

"We always tell her to tell us a scary story and she just, like, gets up and she's like, 'Once upon a time,' and it's so dramatic, the readings of it... Maybe we're just dorky parents, but we think everything's funny."

Luna definitely has her mom's sense of humor, that's for sure. Teigen should be super proud. The fact that Luna feels comfortable enough to express herself in the way that she does is a really great quality. One can only imagine the person Luna will grow up to be, but it's probably safe to say she'll carry her fantastic personality and comedic timing with her and possibly even make a career out of it. Whatever the case, there's no denying Luna is already a shining star.