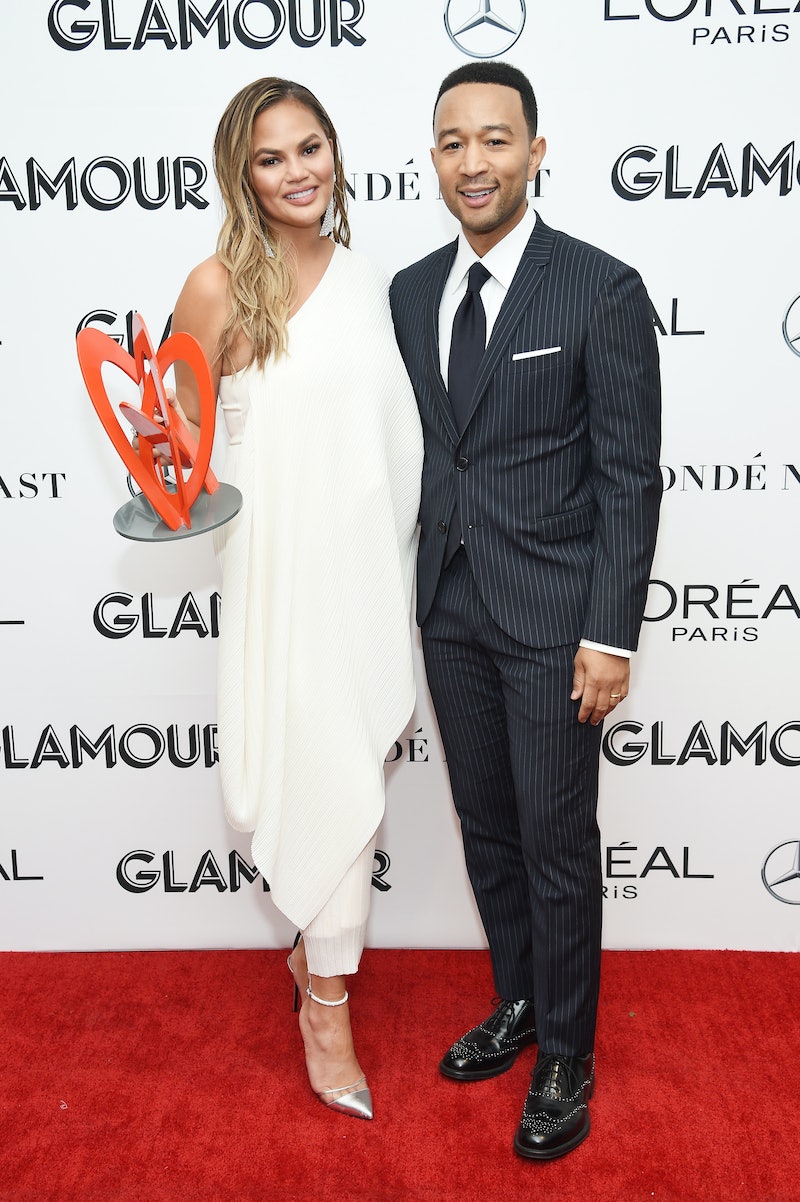 John Legend may be 40, but the theme of his birthday was 007. Chrissy Teigen's James Bond birthday party for John Legend looked amazing. On Saturday, the couple hosted friends and family to celebrate the singer's fourth decade in style. Guests included Kim Kardashian, Kanye West, Kourtney Kardashian, and celebrity hairstylist Jen Atkin, who is a close friend of Teigen's. Legend's birthday was on Dec. 28, but the couple postponed the party for the star until the New Year. The wait was worth it — the Casino Royale themed bash looked spectacular, and was complete with a poker table photoshoot.

Teigen and Legend dressed all the way up for the event, with the cookbook author wearing a gold gown. Legend wore a white tuxedo, and even their two kids, Miles and Luna, wore special outfits. It's clear that the star's family wasn't going to let the milestone pass without some major celebrating. And the party wasn't even the first gesture from Teigen to commemorate her husband's birthday. In December, Teigen shared a special birthday message for Legend on Instagram, writing:

"Happy 40th birthday to the most incredible man. The best father, hardest worker, best lover, best friend I could ever imagine. Every day I am grateful for how much you love us and how much you both say it and show it. You are one of a kind. I am grateful to your family for creating and raising such a pure, sweet, brilliant man. The world has been blessed by your 40 years on this planet. I love you. I showed you that this morning BOOYAHHHH"

The message was classic Teigen, both moving and funny. The Cravings author wasn't going to let the big day pass without a party, either, and it looks like the whole family came together for the Bond-themed bash. Thankfully, Teigen and friends documented the party on social media.

Teigen shared a selfie of her gold dress on her Instagram story. The sparkly gown perfectly complimented Legend's white Bond suit, bringing the theme to life.

The star also shared a picture of her daughter Luna, who dressed up for the event. She had a bit more trouble deciding on a look for Miles, and even posted a poll on Twitter to get input on which tuxedo would be best.

Teigen wrote, "okay guys. throwing john’s 40th birthday party tonight but need your help dressing mini-john. Which one!". After putting the poll out into the world, fans were largely in favor of the white tuxedo to match Legend's outfit.

Legend and Teigen weren't the only ones who documented the event as several guests shared moments on social media as well. Kim posted several updates from the event, showing off the enormous gold decorations at the party which read "040". She also posted an unbelievably cool photo on Twitter that will make you believe that she, West, Teigen, and Legend should be in the next Bond film. "Casino Royale! Happy Birthday John!!!!" Kim tweeted.

Kourtney also shared one of her own photos from the poker table photoshoot on her Insta Stories. The picture shows the star standing in front of the table with a cigar while money floats around her, Additionally, the reality star shared a picture of hairdresser Atkin standing in front of more Bond decor. Kourtney's photos make it clear the guests were having fun with the party's glamorous theme.

It wouldn't be like the Teigen-Legend family to let such a milestone birthday pass without a celebration, and the Bond-themed party did not disappoint. There were jaw-dropping decorations, glamorous sequined costumes, and plenty of the couple's close friends on hand to celebrate — it's difficult to think of a better way the singer could have rang in his 40th year.