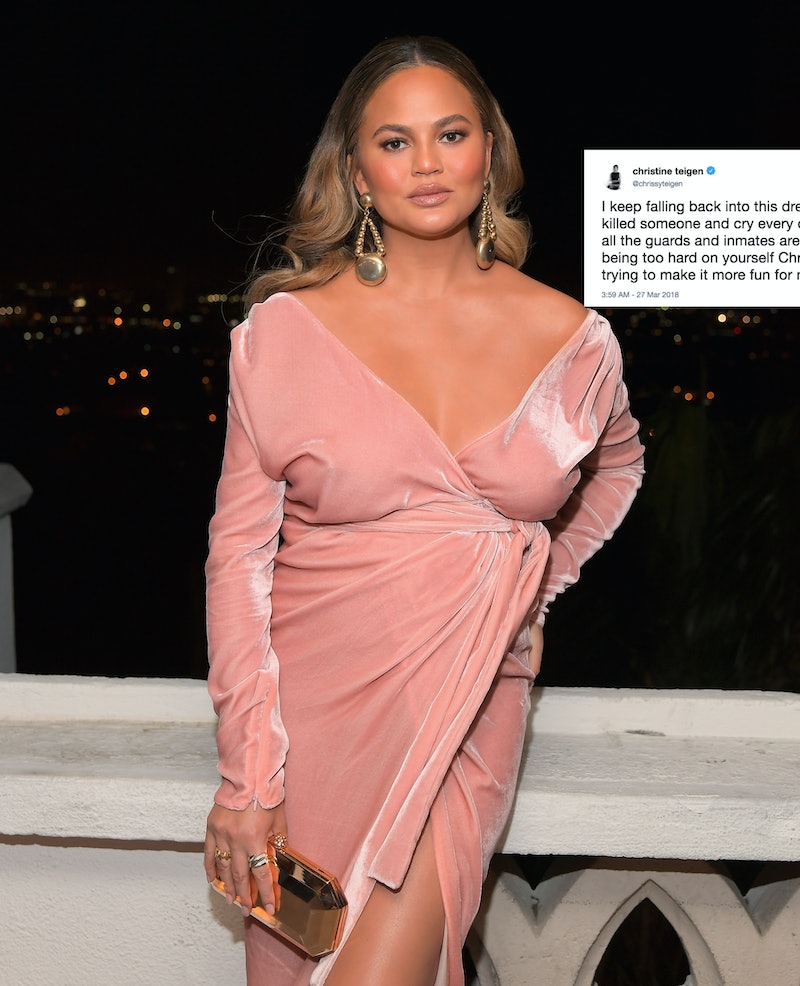 At this point, everyone knows that telling people about your dreams is the best way to bore them. That is, unless you're Chrissy Teigen, who has proven time and time again that nothing is boring when she's involved. On Monday night, Teigen shared her dream on Twitter, and everyone instantly became amateur psychoanalysts and dream interpreters while trying to figure out what her recurring nightmare actually means. Teigen wrote,

"I keep falling back into this dream where I killed someone and cry every day in jail but all the guards and inmates are like 'you’re being too hard on yourself Chrissy' and trying to make it more fun for me."

As always, she managed to remain relatable, because who hasn't had a terrible nightmare? What's more, the idea people around her in jail think that she feels overly remorseful for killing someone is pretty hilarious, but that's also so on-brand for Teigen. So what could it mean? You don't have to look far to learn all of the different analyses that Twitter users have applied to Teigen's jail nightmare.

As you probably could imagine, a lot of people thought that Teigen might be watching too much Orange is the New Black because Taystee definitely would be there to cheer up Teigen if they both ended up in the same prison. And what a spinoff show that would be.

Since Teigen shared her dream following Twitter's eruption over the story that somebody bit Beyoncé at a party and Tiffany Haddish wanted to confront the rumored biter. Because Teigen will always chime in on a great Twitter, the cookbook author had previously shared her own theory about which actor bit Beyoncé. Considering that early on Monday Teigen tweeted about the Beyoncé bite, the event was clearly in her subconscious, and perhaps her Tweet about committing a crime had something to do with biting Beyoncé. That's what plenty of people on Twitter thought at least, including activist @deray, who responded to Teigen's dream tweet saying, "Are you in jail in this dream for killing the person who bit Beyonce?"

The other leading theory behind what could have inspired Teigen's nightmare is the most plausible one, and that's that she is having vivid dreams because of her pregnancy. Everyone knows that Teigen watches more Real Housewives than Orange is the New Black anyway, so it makes sense that this dream isn't necessarily caused by a TV show she may or may not have recently watched.

Many women responded to Teigen's tweet with an air of recognition as they understand how alarming pregnancy dreams can be. One person even warned that this wild dream could indicate that Teigen's close to her labor date, which sort of checks out as the soon-to-be mother of two said that her baby is due in June while appearing on The Ellen DeGeneres Show last February.

All of the people who identified Teigen's dream as a result of her pregnancy might have been onto something, as the American Pregnancy Association suggests that the hormones produced in pregnant women's bodies can cause intense and vivid dreams.

There were, of course, a few other amateur psychologists who instantly attempted to diagnose Teigen's psyche. "You are feeling confined and suffocated," one person wrote. Another responded with, "I would say this dream represents an inner feeling of deep-seeded [sic] guilt over something, whether conscious or subconscious, and the guards comforting you is actually you trying to comfort yourself/tell yourself it’s okay and not to worry."

If Teigen really wants to get to the bottom of this dream's meaning, she'd better see an actual professional. Most likely, the candid celeb just wanted to share her inner musings, which most people seem to greatly appreciate.