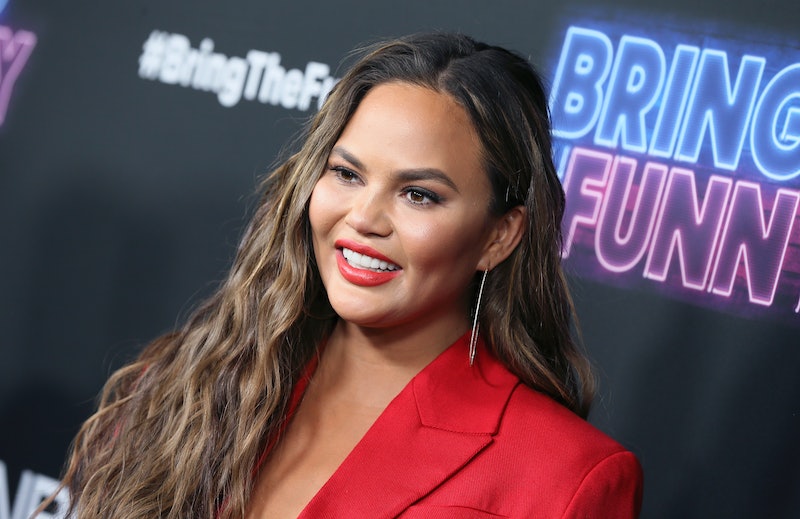 Isn't it kind of wild how much little kids can start to look like their parents from a really young age? It happens all the time — and becomes especially apparent when comparing baby pics — but one star recently made an observation about those similarities that will truly blow your mind. Chrissy Teigen's new Miles pics resemble John Legend in a weirdly specific way, the Bring the Funny judge pointed out on Instagram, and her unconventional comment about their shared likeness is super strange to think about, but actually really accurate.

Teigen posts pics of Miles all the time. Nothing new there. And can you blame her? He's adorable. The one-year-old already looks a lot like his famous father — which Teigen and others have definitely mentioned before — due in part to Legend's often-smiley, seemingly perpetual baby face.

In the caption of some recent pics Teigen shared of Miles on Instagram, however, the star drew a new conclusion about her young son's familiar features. The photos show Miles having a blast on the playground — swinging, grinning, and generally looking precious.

"It’s like someone took my husband, the love of my life, and extended my time with him by giving me his baby years too," Teigen wrote. "Is that weird? That’s weird," she asked and then answered, seemingly to no one and everyone at the same time.

It's ... a little weird, yes. Weird in an endearing way, though, right? Like, it's weird to think that, theoretically, your husband and your son are one-in-the-same — reincarnation-style or something. But, they kind of are, to be honest. It's a lot to process.

Still, plenty of people in Teigen's comments appeared to agree. "That is the best way I've heard someone describe parenting," one fan, @nikinic76, wrote. "It's not weird," added @dandicandi, "I told my husband that our son was a small, snuggle version of him I got to carry around all day. So I get you." A third fan, @cherylwood77, simply mused, "Actually one of the most beautiful things I've heard."

Of course, Teigen and Legend's three-year-old daughter, Luna, is a spitting image of them both, too. She resembles them in a slightly different way than Miles does, but she's definitely developing an outgoing personality just like her mom.

Teigen shared some pics of their family vacation to the beach earlier this week, and there was one photo of Luna, in particular, that really put her burgeoning, model-like attitude on full display. In the shot, she's wearing a sweet, little red dress, looking directly into the camera, and posing with her body slightly turned to the side, her hands squarely planted on her hips.

"*peter griffin LOOKATMYKIDS gif*" Teigen jokingly captioned the pic, in reference to an episode of Family Guy. Don't worry, Chrissy, everyone is looking, and most people are just as smitten with them as you are.

While Luna clearly has a penchant for modeling just like her mom, it's unclear whether or not Miles has an interest in singing like his spitting-image dad. Whatever Teigen and Legend's kids decide to do when they grow up, though, it seems like they'll have their parents' full support, even if they don't decide to follow in their footsteps.