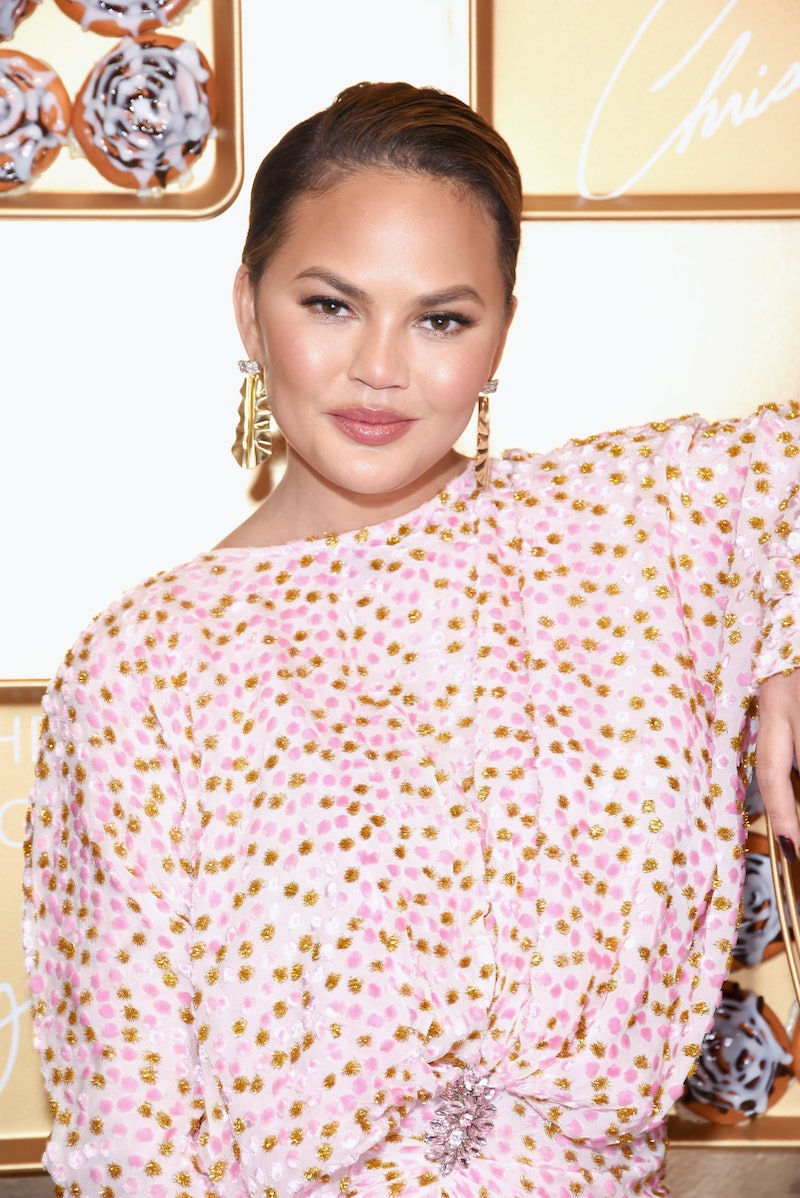 There's never a shortage of hilarious or adorable content from the Teigen-Legend family. On Saturday, Chrissy Teigen shared photos of John Legend and Miles cuddling with teddy bears on Instagram, and the pictures are so cute. In the first photo, Miles can be seen sitting with a pile of stuffed bears. He looks thrilled to be sitting among the fluffy creatures, and he is so teeny the bears are almost as big as him. Teigen captioned the photo: "BEARS!!!" with plenty of bear emojis. She wasn't the only parent loving the pile of stuffed animals, though. She also shared a snap of Legend holding their son and one of the bears. In the photo Legend is smiling, and the pic is captioned: "all the bears!!".

It's clear the Teigen-Legend was loving the pile of teddy bears, and friends and fans couldn't get enough of the adorable pictures. In the comments, Halle Berry commented with the crying and heart emojis, while model Tess Holliday wrote: "This is the stupidest cutest thing I've ever seen in my life anddddd UGHHHHH SO cute!!!!". Antoni Porowski from Queer Eye chimed in to write: "Omggggg" with plenty of heart eye emojis, and actor Padma Lakshmi commented: "Mini John!! Dying for the cuteness!!!". Even Build-A-Bear, the customizable teddy bear company whose logo was stamped on the stuffed bear's hands, wrote: "Wellp, the cuteness meter has officially broken." Given the amount of bears they see every day, it does seem like Build-a-Bear would be the authority.

It's not the first time the Lip Sync Battle host has photographed her kids with some exceptional teddy bears. In March, Teigen shared a photo of her daughter Luna with large teddy bears while abroad. The picture was taken on a trip to Seoul, South Korea, and it read: "Hi Seoul!" The angelic photo was taken before Miles was born, but the teddy bears are clearly still among the family's favorite stuffed animal. Last week, Teigen also shared a promo picture for the NBC Christmas special with the whole family, and Luna can once again be seen holding a fluffy teddy bear.

The sweet pictures are far from the only memorable moment Teigen has shared on social media lately. The star often makes funny and smart observations on Twitter and Instagram, and she recently shut down a troll who tried to shame her for not breastfeeding, according to Cosmopolitan.

Legend posted a photo of the whole family backstage at The Voice, and Teigen's mother holds Luna while she gives Miles a bottle. One rude commentator felt the need to chime in and wrote: "You no longer breastfeed?". Teigen responded to the user, writing: "John never breastfed Miles." The answer is so funny, since it was none of the commenter's business and they did ask the question on Legend's photo.

Teigen is popular on social media for her quips, but fans are always grateful for the super sweet baby updates. In recent weeks she's shared a few Luna and Miles pictures, and it seems like each one is more adorable than the last. It's not clear why Teigen had so many Build-a-Bears, but Legend and Miles are not letting any of the cuteness go to waste.