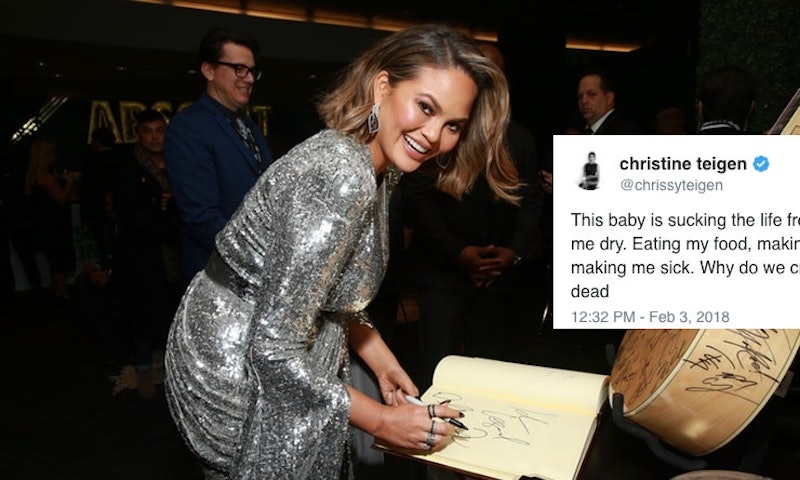 For years, Chrissy Teigen has endeared herself to fans with her honest, hilarious, and often unexpected insight into being one half of an internationally known couple. These days, the former model and cookbook author is super pregnant, and she's keeping fans informed of every little step along the way. In fact, Teigen's pregnancy updates on Twitter are always hilarious, but her latest one is probably a little too real.

Early on Saturday, Feb. 3, Teigen tweeted about the seemingly vampiric experience that is a pregnancy. "This baby is sucking the life from me," she lamented, "Drinking my water, making me dry. Eating my food, making me hungry. Taking my health, making me sick." The kicker is a dark, amusing take on having children: "Why do we create these monsters they want us dead!"

Well, that's one way to view your offspring. For Teigen's fans, though, it's not much of a surprise. She's documented her second pregnancy on Twitter, and throughout the journey, she's shared honest insights mixed with foul-mouthed complaints. It all jives with Teigen's darkly comedic, occasionally frustrated takes on the world. She initially rose to prominence as a Sports Illustrated model, but Teigen's legacy will undoubtedly be her generous nature and fearless, phenomenal tweeting.

One of Teigen's most admirable traits is that she's not afraid to pull back the glamorous curtain that is celebrityhood. It's always funny, and encouraging, when she snaps at people who hate on her tweets, and that's all just part of her charm. She will straight-up tell people when she's drunk in a photograph, or how much she eats, or corrects the record about what it's like to be famous, and on and on.

Instead of trying to craft a "down-to-Earth" persona that so many celebrities aspire toward, Teigen is always authentic. She's witty and self-aware and real, and that's what's so amazing. Few celebrities could tweet about their child "sucking the life from them" and get away with it. Headlines about their dislike of children or distaste for pregnancy would quickly make the rounds. They'd likely have to issue an Instagram apology that clarifies exactly what they meant. Not Teigen, though; explaining that her unborn child is a "monster" that makes her sick is just another day in the life of the refreshingly honest mom.

She's playful and jokey in her daily observations, but that doesn't make them any less legitimate. Here are some of her other insights from pregnancy number two:

Didn't even know pregnancy sneezing was a thing. Happy to have this information now, though.

That sounds more or less like a bad hangover, but fans understand.

So, yes, while she may or may not view her future child as a current parasite, at least it's nothing new for Teigen. She's refreshingly honest, and almost too open, and happy to take fans into this immensely personal journey. While she also seems ready to snap back at people who insult her, her responses to big fans are even more fun. Any time a Teigen stan responds to one of her tweets, they act like longtime, personal friends. People share well wishes to her and explain their own pregnancies, and each Teigen pregnancy tweet instantly becomes a little community for Twitter users to share their experience.

Teigen's pregnancy journey may finally be the thing that brings peace to Twitter and unites the world in a common cause. The cause, of course, being grousing about the wonderful joy that is pregnancy, motherhood, and life in general. Painful, enjoyable, ridiculous life in general.