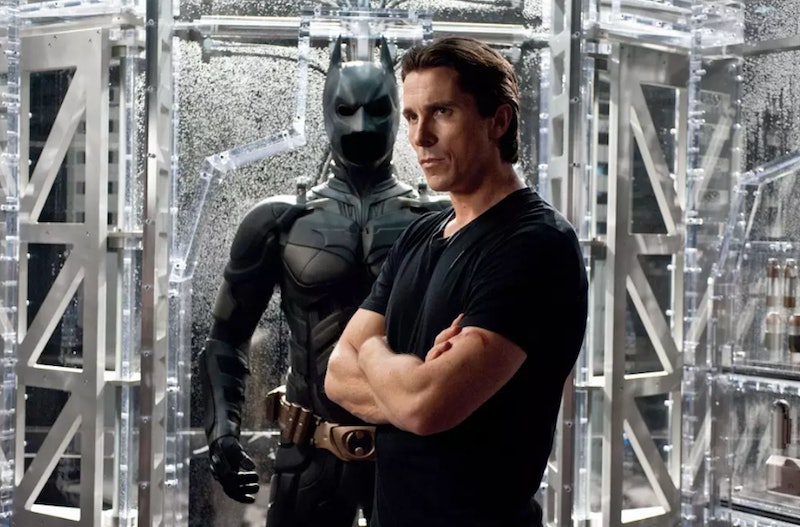 Christian Bale is Batman — at least the current POTUS might have once thought so. According to the actor, years ago, Donald Trump thought Bale was really Bruce Wayne. Or, so Bale jokingly claimed in a new interview. The funniest part of the story may be, though, that Bale, being the gifted actor he is, just went along with it.

In a new interview with Variety, Bale talked about meeting the current president while filming The Dark Knight Rises back in 2011. “I met him, one time,” he told Variety on the red carpet for his new movie Vice, in which he plays former Vice President Dick Cheney. The Dark Knight Rises was filming a scene in Trump Tower and the tower's namesake invited Bale up to his office and the actor's always had a sneaking suspicion that Trump didn't quite know who he was.

Bale added, "I had no idea at the time that he would think about running for president.” And neither did anyone else. Though, maybe we should have, since 2011 was the same year as that infamous White House correspondents dinner where then President Barack Obama mocked Trump and his "birtherism." During the election, that very night would be mentioned time and time again as the reason Trump ran for president.

At the time of his meeting with Bale, Trump was a business man who wanted a piece of Hollywood. He was the host of The Apprentice and made a few appearances in movies, often ones in which his real estate holdings were also featured.

Last year, Matt Damon told The Hollywood Reporter that Trump had a requirement for filming at Trump Organization buildings, which entailed a part be written for Trump to appear in the film. "The deal was that if you wanted to shoot in one of his buildings, you had to write [Trump] in a part," he said. "[Director] Martin Brest had to write something in Scent of a Woman — and the whole crew was in on it."

While Scent of a Woman filmed a scene with Trump, they ultimately ended up cutting it out of the film because the deal didn't include a mandatory clause to keep it in. "But I guess in Home Alone 2 they left it in," Damon joked.

That film's star Macaulay Culkin really wishes they hadn't left in the scene in which his Home Alone character Kevin McAllister asks Trump for directions. In fact, it's one of the reasons he likes the first Home Alone better. "The first one was more fun because we didn’t know what we were walking into and it was a lot less flying all over the place," Culkin said in a Reddit AMA from earlier this year. "It was all in Chicago. It also had 100% less Donald Trump."

While Trump has yet to let the world know which Home Alone is his favorite, he does seem to have chosen his favorite Batman. Back in 2013, Trump tweeted his support for Ben Affleck playing the Caped Crusader for DC. "Everyone should calm down," he wrote. "@BenAffleck is going to do a great job as Batman."

While Bale might no longer be Batman in Trump's mind, it'll be interesting to see whether he becomes Trump's new favorite Dick Cheney when Vice drops on Christmas Day.