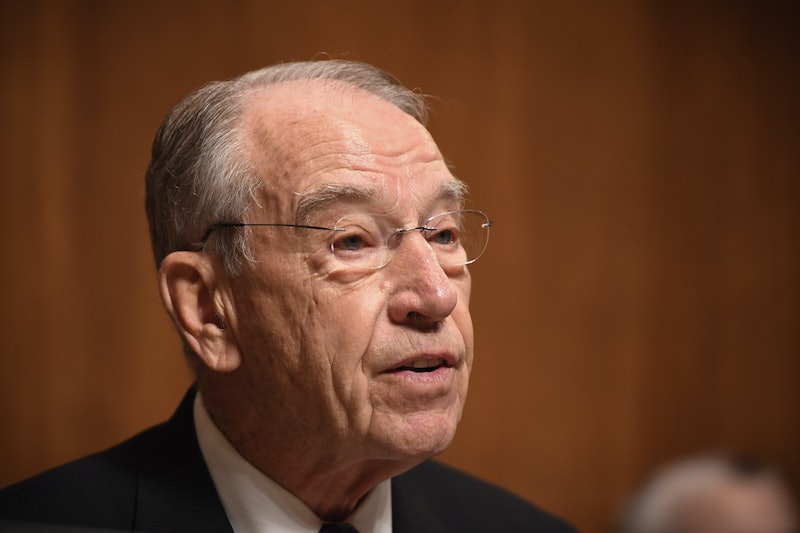 It's no secret that women aren't equally represented in the U.S. Senate. But the impact of a majority-male Congress came into focus last week when the Senate Judiciary Committee's Republican members hired a female prosecutor to question Brett Kavanaugh's accuser rather than send 11 men to ask Christine Blasey Ford about sexual assault allegations. On Friday, Iowa Sen. Chuck Grassley suggested that women senators don't want to join the Judiciary Committee because it's too hard.

"It’s a lot of work — maybe they don’t want to do it," Grassley said, per The Wall Street Journal. "My chief of staff of 33 years tells me we’ve tried to recruit women and we couldn’t get the job done."

Grassley quickly attempted to walk back his comment, telling reporters on Friday that he also has a "hard time getting men on the committee" because "it’s just a lot of work whether you’re a man or a woman." He added, "On average, any woman in the United States Senate, whether they’re on Judiciary or any other committee, probably works harder than the average man."

Sen. Dianne Feinstein (D-California) and former Sen. Carol Moseley Braun (D-Illinois) were the first women to join the Judiciary Committee in 1993, and Feinstein is now the minority party's ranking member.

When Anita Hill testified before the Judiciary Committee that then-Supreme Court nominee Clarence Thomas had sexually harassed her in 1991 (which he denied), she was questioned by all male senators. Four women now join their ranks, but all four are Democrats — which is why GOP members brought in a female prosecutor to question Ford in September. While Rachel Mitchell's presence highlighted the Senate's lack of female representation, Grassley's comment seemed to shift the blame from a political system that places women at a disadvantage onto women themselves.

Overall, 23 women serve in the U.S. Senate. Of those 23, 17 are Democrats and six are Republicans, according to the Center for American Women and Politics. Just four are women of color.

Voters tend to stereotype male candidates as more knowledgeable, trustworthy, and convincing, while women candidates are more harshly judged by their appearance, studies show. Though a record number of women are running for office this year, those obstacles haven't disappeared.

Despite his suggestion, Grassley predicted that the Senate Judiciary Committee will have more female members next year. A total of 22 women have advanced to the general election in Senate races this year, and Politico predicts that the number of female senators will increase by at least four come November.

Grassley also commented on the number of women occupying the Supreme Court bench on Friday, asserting that two female justices isn't enough. "Probably five would be about right," he told reporters on Friday, per The Journal. Justice Ruth Bader Ginsburg, however, has said that the nation's highest court won't have enough female justices until all nine people on the bench are women.

Regardless of whether or not serving on SCOTUS or the Senate Judiciary Committee is "a lot of work," female politicians are coming for men's positions of power this year. Just as the "Year of the Woman" prompted Feinstein and Braun to run for office, women frustrated by male politicians' actions are again filling the nation's midterm ballots.