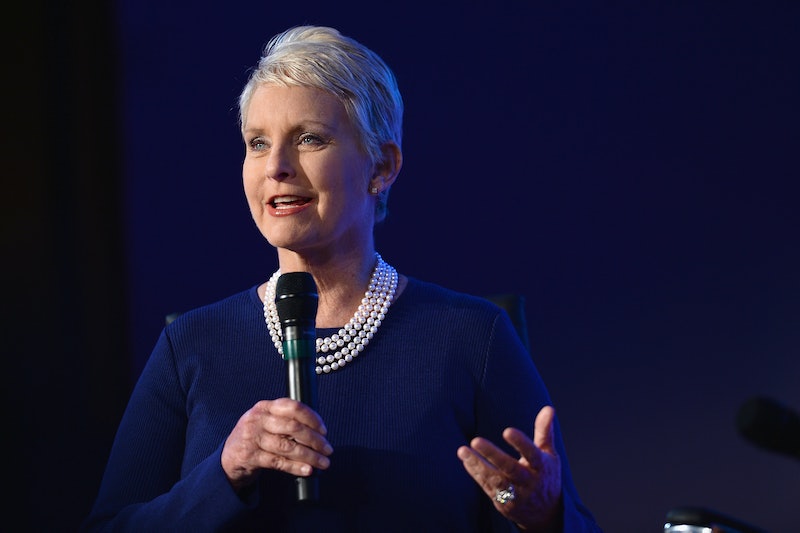 On Monday, Feb. 4, Cindy McCain, Sen. John McCain’s widow, told an Arizona radio show that she had reported an alleged human trafficking attempt at the airport the previous Friday. She claimed that she’d seen a woman traveling with a toddler who was a different ethnicity, and thought it could be human trafficking. The situation “looked odd” to McCain, she said. However, on Feb. 6, Phoenix police refuted her claim that she’d "saved" a child from human trafficking, saying there was no evidence of wrongdoing when they performed the requested welfare check. McCain took to Twitter to apologize: “I commend the police officers for their diligence. I apologize if anything else I have said on this matter distracts from ‘if you see something, say something.'”

The incident quickly drew criticism on the internet, but a major part of the backlash around the incident focused on McCain being a parent of a child of a different ethnicity herself. In 1991, McCain adopted her daughter, Bridget McCain, from Bangladesh.

This event, though it made headlines with McCain, is much larger than McCain or her family. This is a symptom of the erasure of multiracial families and their authentic narratives.

It wasn’t until 2000 that the U.S. Census allowed people to self-identify as belonging to more than one racial category, but being multicultural is nothing new. Jennifer Lee and Frank Bean, sociologists from the University of California, Irvine, predict that 20 percent of the U.S. population will be multiracial by 2050. Despite this, most of our media still only references families of a singular cultural background. The perpetual erasure of multicultural families and marginalized familial identities are fueled by micro- and macro-aggressions that are damaging not only to the family or individual, but creates a society that allows such behavior.

Like Bridget McCain, I was adopted by a white woman. I identify as a transracial adoptee and I grew up as a visual minority in Portland, Maine, in the ‘90s. For years I would be taunted about the way I looked. Kids would smirk at their own self-professed wit as they told me that I was “tan all year round.” To my peers, I did not have a racial identity; instead, because I was shades darker than them, I must be tan. I was called exotic, asked why my English was so good or straight up why I wasn’t the same color as my family. These were only some ways that I lost my sense of power, my sense of self, and how my identity was stripped from me.

For the longest time I didn’t really identify as any race. I learned not to acknowledge my own racial and ethnic experience, mostly because I didn’t have any environmental references; there were no Latinx or Honduran people in my community — none that were visible, anyway. But the other reason was because each time I tried to claim my racial identity, I was either told I was not Latinx enough (by both Latinx people and white people) or told that it only mattered what was on the inside, and what I looked like didn’t matter ( a very harmful colorblind approach that contributes to systemic racism).

But, you see, it did matter. I did matter. I wanted to identify. I wanted to find my community. But the world that I lived in did not see me. I did not have the language to express my inner turmoil surrounding my racial identity. In the adoptee community, we use the word “transracial,” but if you Google “transracial” today, you will see that stories about Rachel Dolezal — the woman who, in the mid-2010s, became the subject of a media frenzy for claiming to identify as Black despite wholly European roots — appropriated the word so much that the true meaning is lost. Since Dolezal inserted herself into the transracial narrative, many people dismiss and erase the primary word transracial adoptees have to encapsulate their experience entirely because it’s been recontextualized by Dolezal. Funny how language works.

The erasure of the true meaning of transracial identities is just one aspect of how insidious these kinds of microaggressions are. But they ultimately set up a context where someone like McCain can feel empowered to make assumptions about what a family is "supposed" to look like.

People in multicultural families live in a world that invalidates our racial identities on a daily basis. But these individuals are not just statistics. They are me, or they may be you, or they may be someone's child. For someone like Cindy McCain, who is a parent of a child who is not the same ethnicity as she is, to identify another family as potential human traffickers as opposed to another family who may be in the same circumstance she is, illustrates how pervasive racism and bias are in our country.

It is important for society to see more representations of varying family models and learn to embrace them, to not see them as other. The lack of representation communicates the message that we are invisible, and therefore not important.

But we live in a world that is beautifully diverse. To deprive people of visual models that represent this diversity in media and pop culture does a disservice to the millions of people who identify as multiracial. Our identities are complex and valid. By embracing the complexities of our human identities, we provide people with mirrors, where they can finally see themselves.