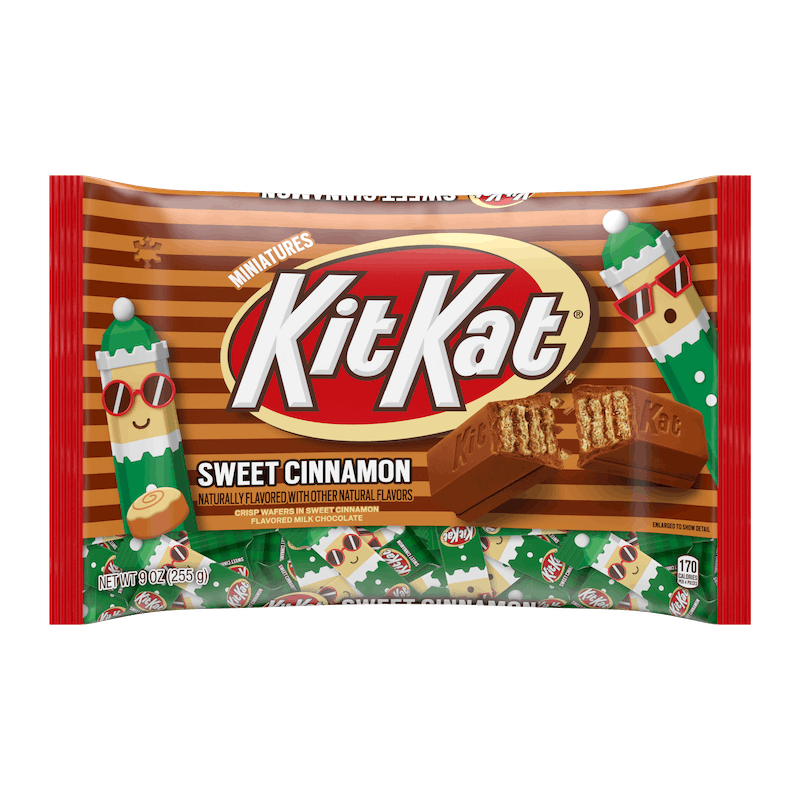 It may only be September, but we are already swimming in delicious holiday candy news. The latest thing to look forward to may not be hitting shelves until November, but will be well worth the wait: Sweet Cinnamon Kit Kats will be available at major retailers nationwide, giving a festive shakeup to the iconic candy staple. They'll be available as Kit Kat Miniatures, and sold in bags nine-ounce bags with a suggested retail price of $3.49.

Per Kit Kat, the new flavor is "crisp wafers in sweet cinnamon flavored milk chocolate," so it isn't too far of a departure from the original. Bustle had the opportunity to try the Kit Kat flavor ahead of its release, and to be honest, this was one of my most anticipated holiday candy releases of 2019. A lot of desserts (chocolates and ice creams in particular) that release cinnamon flavors run the risk of it being way too overpowering, and Kit Kat certainly took a chance by adding it into something that to a taste that was already so familiar to fans — but the cinnamon flavor is super subtle, with just the right about of punch to elevate it. It's ideal for the holidays, too, because it just kind of tastes like Christmas? Not the most helpful of taste profile descriptions, I know, but trust me on this one.

In terms of people who are going to like this most, I'd point toward anyone who enjoys a good cinnamon roll, the Cinnamon Dolce Latte at Starbucks, or even pumpkin-flavored things — this seems to be in that same flavor profile of sweet with a little bit of spice. I'd also advise that you pair it with a nice coffee or tea drink, just to maximize the cozy effect.

Again, you won't be seeing these until November 2019, but there's plenty of other holiday dessert news to keep you company as you wait. In fact, Walmart's holiday desserts have already hit shelves, including a Peppermint Creme Pie, Egg Nog Ice Cream, and Peppermint Ice Cream. Snickers also just threw its hat into the candy shakeup ring with a new flavor that's perfect for fall — Snickers Pecan, which swaps out peanuts for pecans, is available for an extremely limited time, and available for purchase only through the Snickers Pecan website in packs of 30.

But if you're one of those people who only just starting leaning into fall and is concerned by the holiday creep, there are still plenty of seasonally appropriate things for you to enjoy — in fact, pumpkin season just hit Trader Joe's so hard that I'm pretty sure the PSL threw a rave inside of it. Speaking of, all of Starbucks' pumpkin drinks, including the Pumpkin Cream Cold Brew, are all still going strong through September and October. So whether you want to live in the now or live in the three months from now, there's a perfect dessert option out there for you; just make sure to keep your eyes peeled for those Sweet Cinnamon Kit Kat Miniatures, because once they do hit shelves this fall, they'll only be around for a limited time.