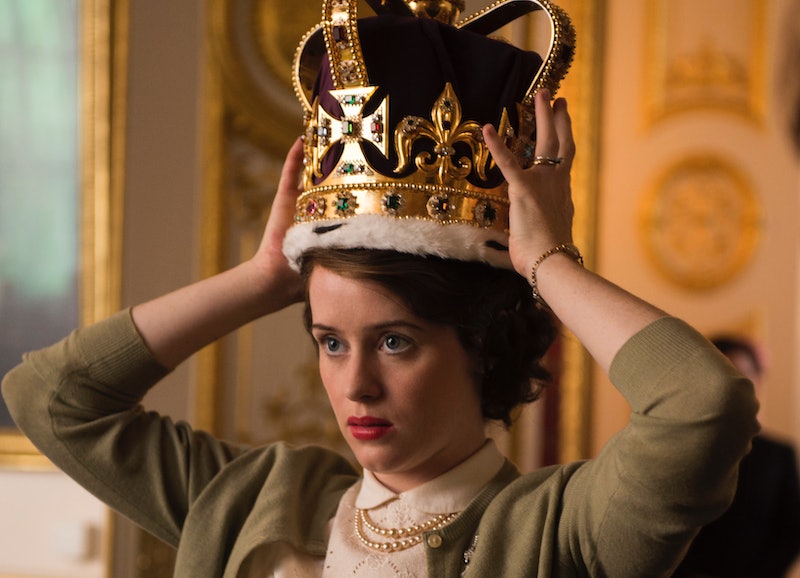 Buckingham Palace is going to need to make room for two queens. According to a paparazzi photo published by The Daily Mail, Claire Foy will be in The Crown Season 4. Olivia Colman has been reigning as the monarch Queen Elizabeth in the most recent Season 3 on Netflix. But the photo heavily implies that Foy will pop up in a flashback for Season 4, making for a regally historic television event worthy of the finest Crown Jewels. Bustle reached out to Netflix for comment.

The image released by The Daily Mail shows Foy in a white dress and pearl necklace speaking into a BBC microphone. Based on her attire and the mic, the publication noted the photo seems to depict Queen Elizabeth's 21st birthday speech from Cape Town, South Africa. The Crown had portrayed another royal visit to Africa in Season 1, where Elizabeth learned that her father, King George VI, had died. But this birthday speech broadcast over the radio occurred years earlier, in 1947, when she was traveling with her parents and sister. In the speech, she committed herself to the Commonwealth, saying, "I declare before you all that my whole life whether it be long or short shall be devoted to your service and the service of our great imperial family to which we all belong."

Since finishing her part as the younger queen in The Crown, Foy has appeared in the movies Unsane, First Man, and The Girl in the Spider's Web. She also reunited with her Crown husband Prince Philip on stage in 2019 when she and Matt Smith starred in the London stage production of the play Lungs. But as Lungs ended its run on Nov. 9, Foy's schedule seemingly opened up for her to make a grand return to The Crown.

Foy won a Golden Globe and Emmy for her portrayal of the British monarch, but the plan for The Crown was always to have three actors portray the queen at different stages of her life. While showrunner Peter Morgan noted to Entertainment Weekly that he could have written a third season for Foy's "young queen," he felt that she and Smith were ready to move on from the roles. However, Foy apparently isn't opposed to returning for a cameo in The Crown — and it probably doesn't hurt that she doesn't have to rock that titular crown (since she'll seemingly be playing the royal in her pre-queen days).

When discussing taking the role over from Foy to EW in the same cover story with Morgan, the Oscar-winning Colman said, "It's horrendous ... Everyone loves Claire Foy, so I have got the worst job in the world at the moment." But following Season 2, Foy told Entertainment Weekly that she thought Colman was "the perfect choice" to step into the role and The Crown Season 4 should give the opportunity for these two queens to join forces.

With the possible addition of a Foy flashback and reports that Imelda Staunton will take on the part for Seasons 5 and 6, perhaps even a trio of queens will be in the cards for The Crown in the future. But for now, fans will be more than happy with two of a kind, especially when the pair are as talented as Colman and Foy.