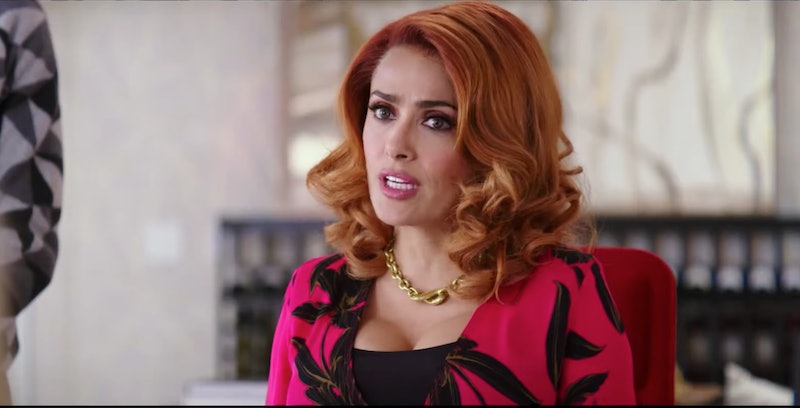 In Like A Boss, childhood BFFs Mel (Tiffany Haddish) and Mia (Rose Byrne) open their dream business: a cosmetics company known for cheeky product names like the "One-Night Stand Kit." But despite the brand's cult following, the pair find themselves in debt. To repair their finances, they partner up with Claire Luna (Salma Hayek), the Devil Wears Prada-esque head of a juggernaut makeup brand. Though Luna offers to invest in their line, her intentions are far from pure - in reality she plans to steal their ideas, not help save their business. But is the film's villain, Claire Luna, based on a real person? While she's not directly impersonating any particular beauty maven — or horrible boss — her poor managerial skills have some very real-life precedent.

Luna is reminiscent of many notoriously bad bosses in the glittering industries of fashion, wellness, and beauty. And while none are quite as maniacal as the fictional character, there are more than a few examples of Luna-like operators.

Just take former J. Crew Vice President Alejandro Rhett, who in 2015 fired 175 employees (about one tenth of J. Crew's staff at the time). Hours later, Rhett uploaded Instagram pictures of himself partying and mocking those let go — comparing their layoffs to the Hunger Games. His abhorrent behavior and social posts weren't looked upon kindly by Rhett's higher-ups, and he himself was let go a few days later.

Then there's THINX CEO Miki Agrawal. The self-proclaimed "SHE-eo" behind the "period underwear" brand was ousted from her company after complaints of pay disparity between genders, inappropriate touching, and inadequate human resources. After employees began speaking up about her unprofessional behavior, Agrawal stepped away from the company.

Companies like Luna's paint a beautiful portrait of their corporate structure to the outside. They seem glamorous and aspirational. But much like in the cases of J. Crew and THINX, good business starts from the top down. And if you have a Luna-esque boss at the helm, there's bound to be trouble brewing at the bottom.

More like this
Keke Palmer Shares The Sex Of Her & Darius Jackson's Baby
By Jake Viswanath
Gerard Butler Insisted On Adding This Pivotal Scene To 'Plane'
By Catharina Cheung
Jemima Khan Used Her Own Life As Inspo For 'What’s Love Got To Do With It?'
By Darshita Goyal
Owen Thiele Asked Sundance Attendees About Films That Don’t Exist
By Grace Wehniainen
Get Even More From Bustle — Sign Up For The Newsletter
From hair trends to relationship advice, our daily newsletter has everything you need to sound like a person who’s on TikTok, even if you aren’t.