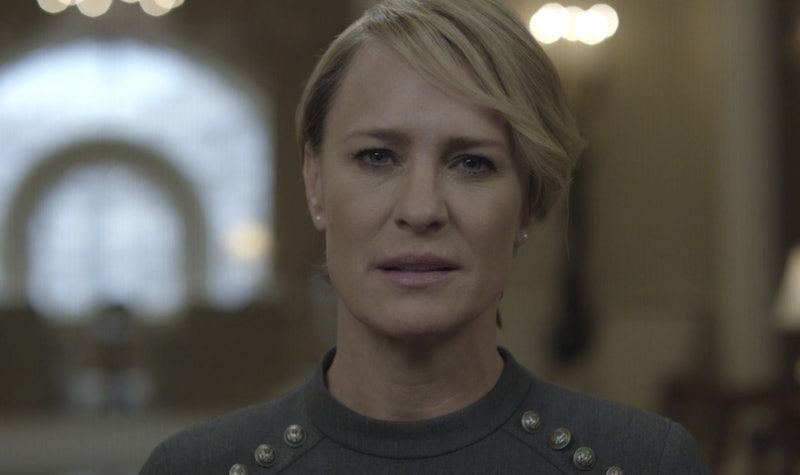 Although House of Cards is a television series about fictional people, part of its allure has always been to compare what Frank and Claire Underwood are up to with what real-life politics in the U.S. look like. In the first moments of Season 5, Claire gives a speech, and it's a hybrid of a public service announcement and a campaign ad (in true Underwood style, it's more deceptively the latter). As Claire uses fear of terrorism as a subtle argument for why citizens should vote for Frank and criticizes the media for focusing on the wrong things, flashbacks to rhetoric that Donald Trump used during the 2016 presidential election — and even now — may have occurred. Whether it's intentional or not, Claire's opening speech in House of Cards Season 5 feels inspired by Trump's stumping in 2016 and manages to still be unsettlingly relevant in 2017.

After Claire broke the fourth wall at the end of Season 4, she solidified that she was Frank's equal in their pursuit for power. So it is only fitting that she is the one to kick off Season 5 by delivering a thinly-veiled campaign message. Claire's speech was used as an ad for the Netflix series and for good reason — in less than a minute and 30 seconds, it manages to show how far the Underwoods are willing to go to bury a story.

Here's what Claire says in all of her Underwood glory:

"I've been meaning to talk with you. It's terrifying, isn't it? The president and I have a simple request. Tell us what you see. If anything in your environment strikes you as a bit odd, a bit off, pick up the phone. Whether it's a package or a person that seems out of place, we'd love you to let us know. Because there's a lot of noise out there these days. A noisy press that's choosing to dwell on the past instead of what's happening right now. My husband and I want to protect you. In two weeks' time, you will be heading to the ballot box to decide what kind of country you want to live in. It's a profound choice. But no matter who wins this election, we're going to need to work together, watch out for each other, and yes, watch each other, to keep us all safe and sound. Tell us what you see."

Claire has mastered the art of speaking like a compassionate person, but her tone in the Season 5 opener probably doesn't fool you, since if you remember everything that happened in Season 4 of House of Cards, you know quite the opposite is true. The First Lady calls out the media because in Season 4, Tom Hammerschmidt published a story about the allegations that Lucas Goodwin had made against the president before he attempted to assassinate him. The Underwoods had been dealing with the terrorist group ICO holding an American family hostage — the Millers — at the time. After the daughter and mother were rescued, they used this hostage situation to their advantage by trying to bury the newspaper article about Frank by having him declare war on the terrorists.

This declaration of war led to the death of James Miller — something the Underwoods knew would happen — and was less about protecting the U.S. and more about leveraging people's fear. This was Claire's idea since she said she was "done trying to win over people's hearts" and Frank agreed, stating, "Let's attack their hearts." Because their desire for absolute power is their sole motivator, the Underwoods were willing to have a man killed and to put the entire country in danger in an effort to make Frank appear to be the nation's savior. After watching Miller die at the hands of the ICO terrorists, Frank said, "We don't submit to terror. We make the terror," as the final line of Season 4.

While I'm not saying that the current president and his staff would go so far as to get a hostage intentionally killed to cover up a media story about him, there is something uncomfortably familiar about Claire's Season 5 opener as her words focus on fear and the press. For example, in his 2016 speech at the Republican National Convention, Trump portrayed America as unsafe, stating:

"Our Convention occurs at a moment of crisis for our nation. The attacks on our police, and the terrorism of our cities, threaten our very way of life. Any politician who does not grasp this danger is not fit to lead our country ... I have a message for all of you: the crime and violence that today afflicts our nation will soon, and I mean very soon, come to an end."

Just as Claire promises in her ad that she and Frank want to keep U.S. citizens safe, Trump used fear-mongering as a way to promote himself throughout his campaign — whether he was focusing on terrorists or immigrants as the threat. He even ended his RNC speech on this message, saying, "We will make American safe again" — a play on his campaign's slogan: "Make America great again."

Another element in Claire's speech that feels particularly pointed are her accusations against the media. Trump attacking the media was a part of his presidential campaign and has continued throughout his presidency. In both the case of Claire Underwood and Donald Trump, it is dangerous to undermine the free press. Then, there's the surveillance state that Claire seems to be advocating for. Salon's Heather Digby Parton wrote that Trump's first batch of executive orders "disturbed" some legal scholars, who are concerned that his end game is "a police state." Claire's message of reporting suspicious acts directly to her and Frank very much advocates for authoritarianism — another fear expressed by some of Trump's critics.

The motivations behind Claire's speech are truly horrifying, since she's using terrorism as a way to distract people from her husband's crimes (which include multiple murders). Trump's motivation doesn't seem much better to many people who think he manipulated voters by using their fear as a way to secure the presidency. So although House of Cards Season 5 will provide you with a break from America's current political reality, the very first scene foreshadows some eerie parallels between the fictional White House and reality.

More like this
Everything To Know About 'The Undeclared War' Season 2
By Rachel Mantock
'The Undeclared War' Took Inspiration From This Gavin & Stacey Location
By Maxine Harrison
Demi Lovato, Jessica Chastain & More Stars Celebrated The 4th Of July By Protesting
By Jake Viswanath
Police Shove 'Full House' Star Jodie Sweetin At An Abortion Rights Protest
By Radhika Menon
Get Even More From Bustle — Sign Up For The Newsletter