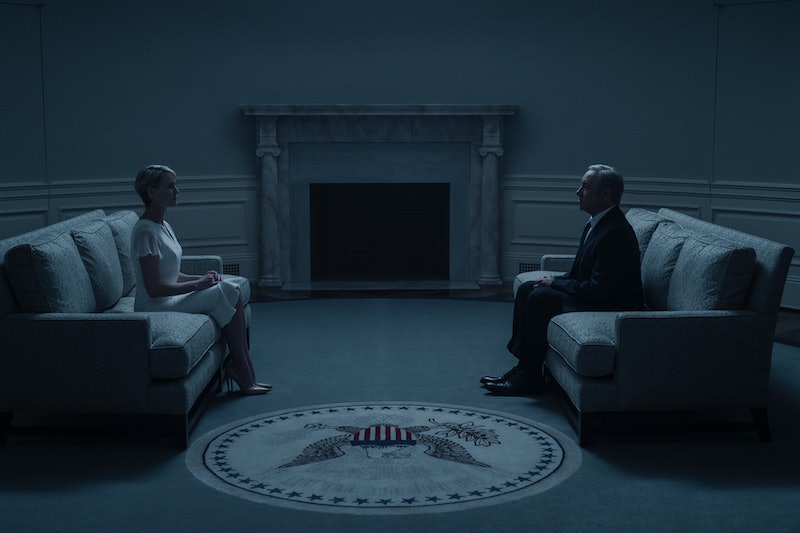 David Giesbrecht/Netflix
By Caitlin Gallagher
May 30, 2017

When a power couple like the Underwoods breaks apart, it feels like the end of an era. Yet, after Claire walked out on Frank in Season 3 of House of Cards, the Netflix series explored what a world where Frank and Claire Underwood aren't united looks like. For better or for worse (better for fans of the series, but perhaps worse for their fictional world), the pair was back together and more united than ever by the end of Season 4 of House of Cards. With Season 5 premiering on May 30, you'll want to refresh your memory about the Underwoods' journey last season and how Frank finally began to view Claire as his equal. And this House of Cards Season 4 recap will get you into fighting shape for when the Underwoods attempt to win the White House.

House of Cards Season 4 premiered in March 2016 — during a time when a Donald Trump presidency seemed unlikely to most. Four months into Trump's tenure, Season 5 of the Kevin Spacey and Robin Wright series will premiere to give viewers a break from reality. With this longer gap between seasons and the current political climate (sigh, remember a time when Barack Obama was president?), House of Cards Season 4 feels like a lifetime ago. So there's no shame in needing a recap to remember every Underwood power play.

Before you embark on Season 5 of the series, get caught up with this Season 4 review. It'll refresh your memory, and it just might make you feel comparatively better about the U.S.'s current state of affairs.

More like this
Everything You Need To Remember Before Westworld Season 4
By Brad Witter
'The Undeclared War' Took Inspiration From This Gavin & Stacey Location
By Maxine Harrison
Police Shove 'Full House' Star Jodie Sweetin At An Abortion Rights Protest
By Radhika Menon
Here’s How Lizzo Is Supporting Abortion Rights After The Roe v. Wade Reversal
By Brad Witter
Get Even More From Bustle — Sign Up For The Newsletter