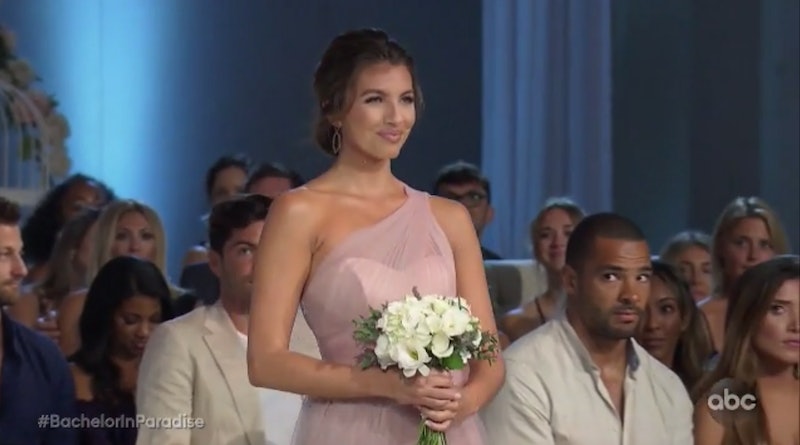 Chris and Krystal's wedding brought many beautiful things to Week 4 of Bachelor in Paradise, but a BiP meme of Clay and Angela momentarily stole the spotlight. Clay was wrought with anticipation to see his ex-girlfriend for the first time since they broke up. And when she walked down the aisle as a bridesmaid, his priceless side-eye reaction was caught on camera.

Clay attended the wedding with his BiP love interest Nicole, who also gave Angela some serious side eye. Going into the ceremony, she was worried about them seeing each other again and revisiting old romantic feelings. According to the look on Clay's face, he was too.

Naturally, the internet took the moment and ran with it, praising it as the ultimate revenge move. If you have to see your ex again, it might as well be walking down the aisle in a beautiful bridesmaid gown with all eyes on you, right?

Clay broke up with Angela after they dated for seven months, claiming on Paradise that she was not his "person." But he was visibly anxious about seeing her again, especially while having to mitigate the situation with the new woman he's dating by his side. Nicole said she felt reassured because Clay held her hand for the entire ceremony, but his later conversation with Angela revealed he does actually still have some feelings for her, even though he was the one to break it off.

Angela, on the other hand, strutted down the aisle with confidence, proving to everyone that she's doing just fine after the breakup. And as if the frozen moment of Clay's first look wasn't enough to commemorate his epic response, fans took the liberty of applying other legendary memes to the situation.

After the ceremony, the tension intensified when only a select group of people were invited to the reception. Clay was included, but Nicole was not. This made him even more nervous, knowing that he was going to be alone. Still, he attended the after-party, where he was noticeably uncomfortable. He watched Angela give her bridesmaid speech to the married couple and then pulled her aside to chat.

He basically told her that it was difficult seeing her and that he still cared about her as a person. He also apologized for visiting Paradise so soon after their breakup, calling it a "selfish" decision. Angela reminded him that she felt led on and was still heartbroken by his actions, considering they talked about buying a house, getting married, and starting a family, and it wasn't something she took lightly.

It sounded like there were some unresolved feelings there, and when Nicole learned about the conversation later, she could tell. Clay reassured her that he was committed to her, but Nicole told the cameras that she was still worried. And now that Angela has officially joined the Paradise cast, it's going to really shake things up. Will Clay and Angela manage to navigate the beach in peace, or will there only be more drama? Might they even get back together? We'll have to watch to find out.