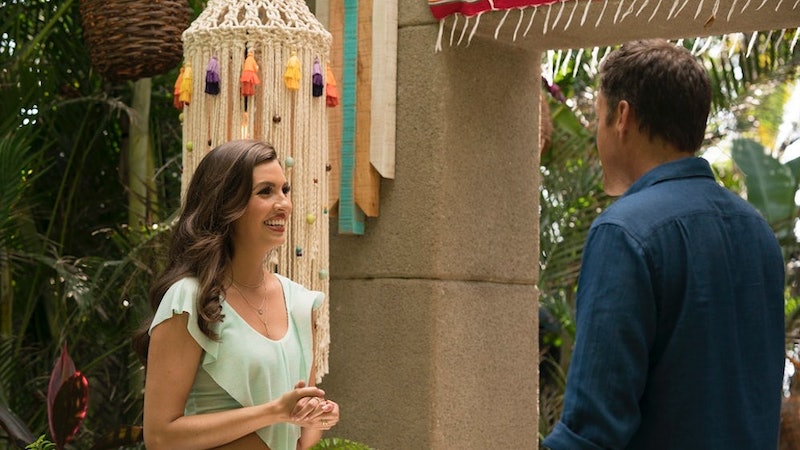 There have already been breakups, makeups, and approximately 10,000 references to the Stagecoach music festival on this season of Bachelor in Paradise, but there's still a lot more to come. We're getting a BiP wedding and some more singles hitting the beach, including the arrival of Bachelor in Paradise contestant Angela Amezcua. She was on Season 5 last year, and she's had a lot going on in the meantime, including dating a certain someone who is already in down in Mexico.

As a refresher, Angela was originally on Nick Viall's season of The Bachelor in 2017, but was sent home on night one. However, because Bachelor in Paradise gives Bachelor and Bachelorette suitors a second chance at love and reality TV fame, Angela ended up returning to the franchise for Season 5 of Bachelor in Paradise. She was there for most of the season and had a connection with Bachelorette star Eric Bigger... until he ditched her for someone else.

After the show, Angela did find love with someone from Bachelor Nation — it just happened offscreen. As reported by Us Weekly, she and Clay Harbor confirmed they were dating in September 2018. But while their Instagrams are still full of pictures of them being cute together, Clay and Angela broke up earlier this year after dating for seven months.

Obviously, this could end up causing some drama on BiP. Clay is currently coupled up with Nicole Lopez-Alvar from Colton's Bachelor season, but former contestant Annaliese Puccini, who is friends with Angela, told him early on that she didn't think he should be there since the breakup was so fresh. It's unclear if Angela is in Paradise just for the wedding or if she'll be joining the season afterward, too, so we'll have to see what happens.

Other than her dating life, Angela has been keeping very busy with her work and her friendships. She is a professional model who is signed with agencies in North Carolina, Tennessee, and South Carolina, where she's from. She also — like many members of the Bachelor franchise — does some Instagram promotions. She recently started a YouTube channel where she shares videos about beauty, fashion, and and her daily life. And on top of that, she has been doing some volunteer work, including at the BI-LO Charities Children’s Cancer Center and at Ronald McDonald House Charities of the Carolinas.

Angela also looks like she has a pretty active social life that features her friends from BiP, especially Annaliese, Krystal Nielson, and Chelsea Roy. In fact, Angela was in Krystal's wedding as a bridesmaid, as shown on BiP.

To go from being sent home on night one of The Bachelor to finding friendships so real that you end up in a wedding is quite the reality TV journey. Now, we just have to see if Angela can find love via The Bachelor franchise again. She could end up having a BiP wedding of her own someday. And if not, she'll be just fine with her career and what look like some pretty amazing friendships.

More like this
Tahzjuan Took A Cruise With These Bachelor Nation Alums After Visiting Zach's Season
By Kayla Blanton and Grace Wehniainen
Rachel Fuda Gave Birth Just Weeks Before 'RHONJ' Season 13
By Brad Witter
Genevie Explained Why She Was Wearing A Sling During 'The Bachelor'
By Grace Wehniainen
Danielle Cabral From 'RHONJ' Is No Stranger To Reality TV
By Brad Witter
Get Even More From Bustle — Sign Up For The Newsletter
From hair trends to relationship advice, our daily newsletter has everything you need to sound like a person who’s on TikTok, even if you aren’t.