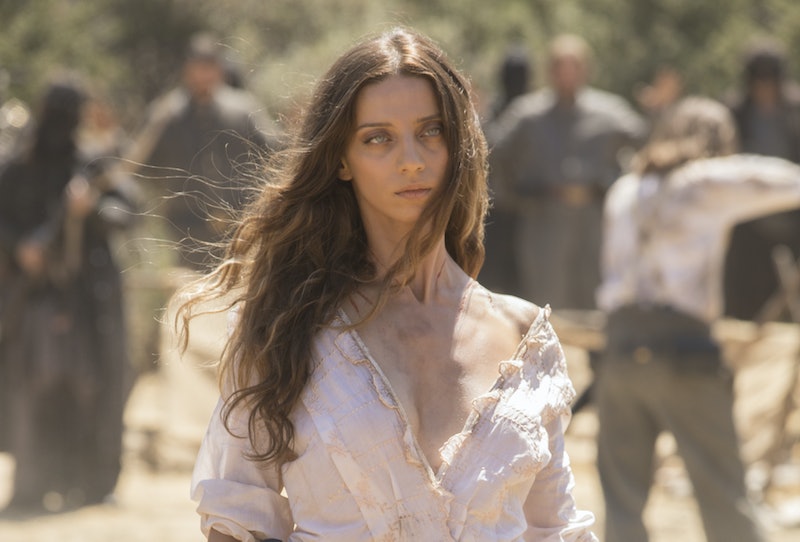 Spoilers ahead for the "Vanishing Point" episode of Westworld. Out of all the transformations viewers have seen over the years — Dolores into Wyatt, young William into the Man In Black, Lee Sizemore into a semblance of a sympathetic character — perhaps none have been as surprising as the journey of Maeve's Mariposa protégé. Clementine's new power on Westworld is just the next step in her tragic arc, from naïve sex worker to a scapegoat in corporate scheming, then from zombie-like acolyte to her current iteration as Charlotte Hale's pawn in her war against Dolores. Judging from the effects of her new ability, Charlotte could either prove to be the violent downfall of Dolores' rebellion… or its unwitting savior.

After learning in Episode 8, "Kiksuya," that Maeve had been secretly communicating with and recoding other hosts through the mesh network, Charlotte exploited that knowledge to terrible ends. In Season 2's penultimate hour, "Vanishing Point," she uses Maeve's ability to install a disastrous new code inside Clementine. Like her former mentor, Clem can now use the mesh network to send commands with a mere thought; except, in this case, her commands aren't to wake hosts up… but to have them violently murder each other. Clementine is now essentially a virus, capable of infecting and killing hosts at Charlotte's whim.

This new development re-contextualizes an image fans have seen in promos for several weeks now, such as the one above: Clementine riding on horseback through the desert, pursued by a cadre of Delos tanks. Or rather, not pursued by but leading; what initially seemed like a scene of Clem being chased by QA soldiers can now be assumed to be a scene featuring Clem being dispatched by Charlotte to wield her new power against Dolores and the rest of the hosts heading for the Valley Beyond.

Viewers have known since the end of the Season 2 premiere that things seemingly don't go well for Dolores' rebellion. At some point, something occurs to all of her forces that causes them all to end up in the inexplicably flooded Valley, dead, some of them with their CPUs wiped entirely clean. Is Clementine the one behind this host massacre? It certainly seems likely at this point… although there are a few details that don't add up.

First of all, Teddy tragically kills himself at the end of "Vanishing Point" — so if the massacre is committed by Clementine, rather than being some ruse planned by Dolores, then how did Teddy's body end up with the rest? Why would Clem bother dragging his corpse into the lake along with the other hosts she murdered? And why would her death-by-mesh-network cause the hosts' CPUs to erase themselves?

There are definitely still plenty of mysteries to be solved during the Season 2 finale, but if Clementine doesn't prove to be the rebellion's undoing, she may just turn out to be its accidental hero. In "Vanishing Point," it's revealed that the Valley Beyond is home to something known as the Forge — basically a version of the Cradle that holds not backups of host programs, but copies of human consciousnesses. Given that Delos has been harvesting guest DNA for all these years, it's conceivable that the Forge also contains manufactured bodies for all of those consciousnesses to be imported into once the immortality technology is perfected.

One theory that could explain the blank CPUs is that the hosts have already uploaded their minds into the human bodies in order to escape the park, and swapped the humans' empty CPUs into their old host bodies. (Remember, hosts all have explosives hidden in their spines that will detonate should they attempt to leave Westworld.) If so, then when Clementine arrives and exerts her new power over the "hosts," she'll wind up destroying not the rebels Delos is gunning for, but simply empty shells — while Dolores and her compatriots make their escape through the Door in their new human bodies. And that would be a finale that would leave Westworld fans panting for Season 3.