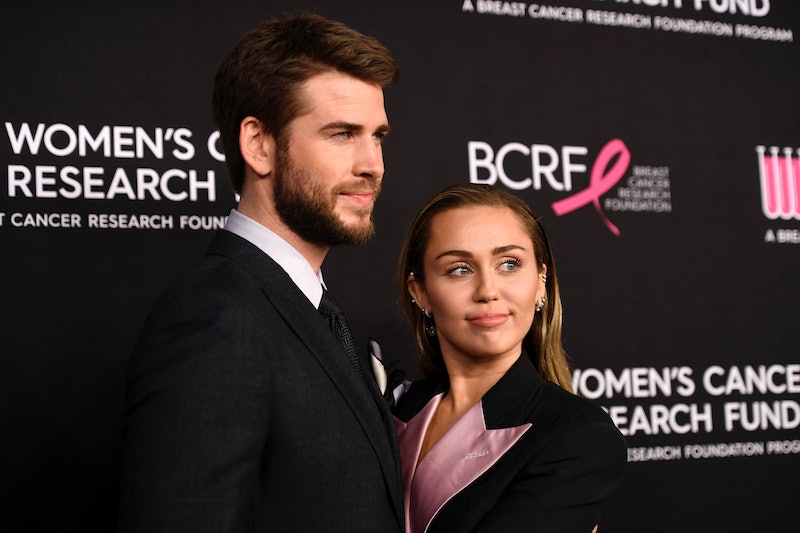 On Saturday, Aug. 10, People confirmed that Miley Cyrus and Liam Hemsworth split after eight months of marriage. Despite being married for less than a year, there were clues about Miley Cyrus and Liam Hemsworth’s split that some fans might have noticed. However, their breakup still came as a shock to many, considering that they've been together on and off for 10 years, but alas, they're parting ways.

In a statement to People, Cyrus' representative said, "Liam and Miley have agreed to separate at this time. Ever-evolving, changing as partners and individuals, they have decided this is what's best while they both focus on themselves and careers. They still remain dedicated parents to all of their animals they share while lovingly taking this time apart. Please respect their process and privacy."

Cyrus is on vacation in Italy with her sister Brandi Cyrus and The Hills star Kaitlynn Carter, and hasn't really spoken about the breakup yet. The singer did post a cryptic Instagram post on Aug. 11, after the news broke, writing, "Don’t fight evolution, because you will never win." Despite fans being saddened by the news, here are some of the clues that could have pointed to their breakup.

1. They Haven't Posted Instagram Photos Together In A While

While many people in relationship like to keep their private lives private, Hemsworth and Cyrus aren't shy about posting each other on their Instagrams. However, the last time Hemsworth had a post with Cyrus in it was June 2, and hers was even earlier on May 7 with photos from The Met Gala. It hasn't been that long, but people in the comments seemed to notice Cyrus' absence. One user commented, "Is anyone going to question with what happened to Liam and Miley?????" while another wrote, "Where’s my Miley ?" Hemsworth seems to be enjoying himself, though, spending time with his brother Chris Hemsworth and posting other nature shots.

In addition to her recent stay in Italy, Cyrus has been posting almost exclusively about her new music and her current performances in places like Kosovo.

As stated previously, the couple has a long history, which is to be expected since they've been dating since 2009, when they wrapped filming on The Last Song. Since then, they split twice in 2010, got back together in 2011, engaged in 2012, and then broke up yet again in 2013. They've been together again since 2016, getting re-engaged in 2017, and then married in December of 2018. But with all those times they've broken up, another split wasn't necessarily inevitable, but their track record seemed to make it a possibility.

A source told E! News that their most recent split was due to growing apart. "They have been trying to make it work for months now but haven't felt they were connecting on the level they were feeling when they got married last year," the source said. "It's been a rough year." While Hemsworth reportedly wanted a "more simplified lifestyle," Cyrus is ready to take on "a new wave of her music career." The source said it wasn't "messy," but that they decided "they are at different points in their lives currently."

3. They Haven't Been Wearing Their Wedding Rings

After initial posts in Italy, Cyrus warned fans that she would be spamming her Instagram with vacation photos and videos. The warning came in the form of a photo of her in a wicker chair, with a black outfit on, but no wedding ring. Only eagle-eyed followers would have spotted that, but less than 24 hours after it was posted, the news of their split broke. Also, The Sun reported that Hemsworth was spotted without his wedding ring in an Instagram video with brother Chris Hemsworth on Aug. 4.

Cyrus released a new EP on May 31, with She Is Coming. It's part of her newest project which consists of two more EPs, one coming out later this summer and one in the fall. And with her major focus on her new music, Hemsworth hasn't posted about any of it on his Twitter or Instagram. Not everything needs to be public, of course, but he did post about her previous album, Younger Now. Also, interestingly, Cyrus attended his movie premiere for Isn't It Romantic? for him while he was sick back in February, so it might have been telling that he didn't post anything about her release in May.

In an interview with Elle for her August cover story posted on July 11, Cyrus talked about marriage and how it's "very confusing to people" that she's married. "My relationship is unique. And I don’t know that I would ever publicly allow people in there because it’s so complex, and modern, and new that I don’t think we’re in a place where people would get it," she said. "I mean, do people really think that I’m at home in a f*cking apron cooking dinner?"

She continued, "I made a partner decision. This is the person I feel has my back the most. I definitely don’t fit into a stereotypical wife role. I don’t even like that word." While modern day marriages are definitely different than the past, and it's nothing bad to have a unique view or relationship, Cyrus' thoughts on the notion of marriage might have been a hint that a breakup was looming.

While it may seem sudden, these clues show that Cyrus and Hemsworth's split might have been coming for some time.