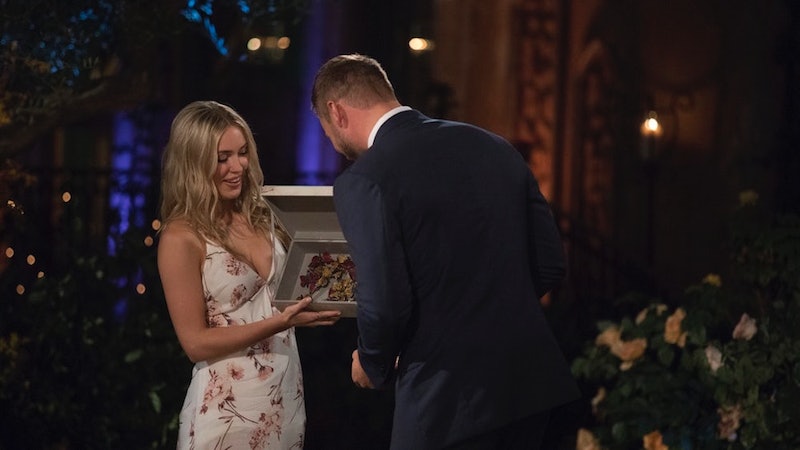 Colton Underwood became this year's Bachelor with the intent of finding his future wife. And now that he has it narrowed down to his final three contestants, that dream is now one step closer to becoming a reality. But even though Cassie may seem like an obvious frontrunner to get him down on one knee by the end of the season, there are clues that Cassie doesn't win The Bachelor like many fans are hoping for, proving once again that Colton's journey is a very difficult one to predict.

From the very beginning, Cassie has been a standout contestant in Colton's mind. Their conversations together have always felt natural and genuine — not to mention that their chemistry is completely off the charts. Even after hearing rumors that Caelynn and Cassie weren't supposedly there for "the right reasons," Colton opted to keep Cassie around. This shows just how much she means to him and that he's becoming really invested in their potential future together.

So then why isn't she a shoe-in to get that proposal? There are some definite signs that their love story won't exactly go according to plan, despite the fact that they seem like an ideal match. For example...

She's The Only One Who Hasn't Said "I Love You"

Of course, this is actually very admirable of her since they haven't known each other very long and she's been sharing his time with several other women. Plus, she wants to make sure when she says it, she really means it and no one can blame her for wanting to stay true to herself throughout this whole process. However, it is something Colton has noticed and could become an issue in the upcoming weeks if she's still unable to get to that point with him. After all, he does want to get engaged and has admitted to falling in love with her. If she's unable to reciprocate those feelings, he may feel he has no other choice than to have them part ways.

Colton Didn't Get Her Father's Blessing

Matt Randolph immediately won fans over with his practical thinking and apparent indifference to Colton overall. But unlike all of the other dads who ultimately gave Colton permission to marry their daughters at the end of the season (a tradition that has definitely overstayed its welcome on the show), Cassie's dad handed out no such blessing. Given that Colton said he wouldn't be able to propose to someone without it, that could indicate Cassie won't be sticking around much longer.

All season long, we've been told once again by Chris Harrison that this will end up being the most dramatic season in Bachelor history — something that he says every season. However, an ABC executive also told Entertainment Tonight that Colton's finale will be like "nothing we’ve ever seen" before. If that really is the case, the odds are the frontrunner won't be the one to ultimately win over Colton's heart, thereby making Cassie's days seem numbers.

The fantasy suite dates will help give us a better indication of how the rest of the season will play out. But if Cassie doesn't end up the winner by the end of all this, there's always the possibility of her becoming the next Bachelorette. Hey, you never know.