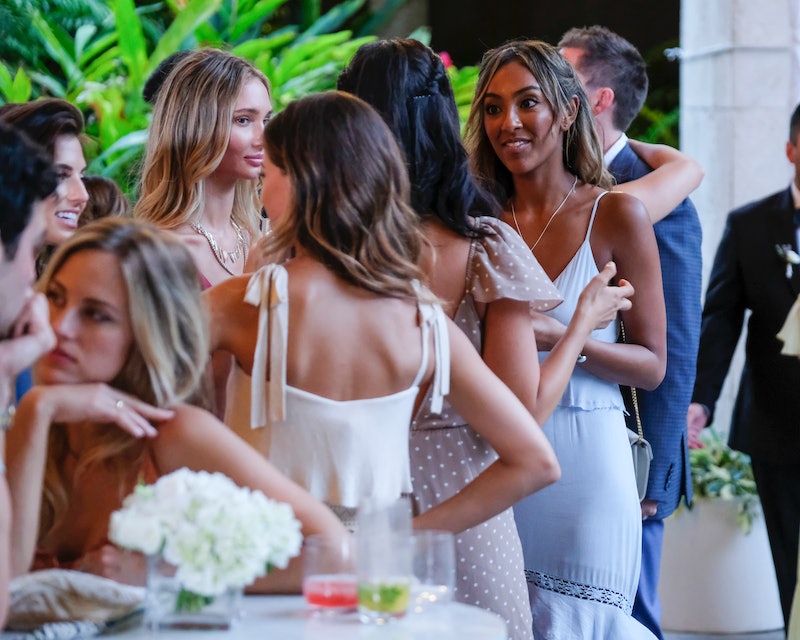 The trailers for the upcoming season of Bachelor In Paradise are, like movie trailers, sometimes better than the actual feature. The trailer for Bachelor In Paradise Season 6 is one of those, and it holds in it an important moment for trying to figure out whether or not Derek and Tayshia are dating after Bachelor In Paradise. In it, John Paul Jones — who is currently into Tayshia, and they make a cute-if-unexpected couple — reads Derek the riot act because he says that Derek "takes advantage" of women. Then, we see Tayshia crying.

The full trailer is below, and all of this drama starts about the 2:00 mark. Get your tissues ready.

Let's read the situation with what we know so far — Demi Burnett has opted not to continue her budding relationship with Derek because she is way more into Kristian, her girlfriend from back home. (Kristian is now on Bachelor In Paradise, because why not?) So now, Derek is single. Tayshia is with JPJ, and they seem to really like each other not just on a romantic level but on a BFF level, too. From the clip, could it be that Derek tries to usurp JPJ's relationship with Tayshia and JPJ's not having it? JPJ doesn't seem the type to fly off the handle if Tayshia felt that she needed to go on a date with someone else, so maybe Derek said something — about Tayshia or JPJ — that really didn't sit well with the most charismatic man currently on the Bachelor franchise. The allegation that Derek "takes advantage" of women is a serious one and even Derek's beautiful eyes can't get him out of this one.

Fast-forward to the present day, and both Derek and Tayshia's Instagram accounts have no mention of relationship in Paradise — Derek had a novella about how he was nervous about reappearing on the show (he was on BiP Season 4, where he got engaged to Taylor Nolan), but that's about it. Now, of course these guys are supposed to keep their details locked down, but it's easy to have a slip.

But there's none of that on either of their social media accounts. It seems like Tayshia and Derek's relationship never really got off the ground, and John Paul Jones could be the one who weighed it all down.