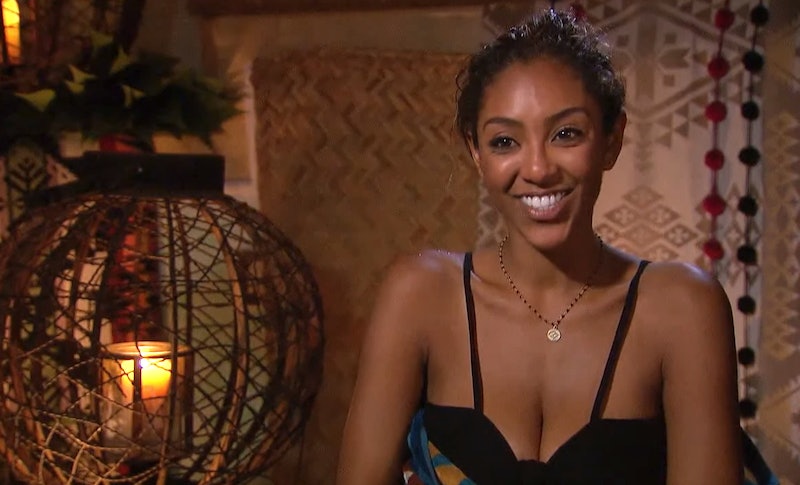 Bachelor in Paradise can lead to some gloriously unexpected couples, but Tayshia Adams and John Paul Jones teaming up in Season 6 may take the cake. After he recited William Shakespeare to her, she gave him her rose and there are clues that John Paul Jones and Tayshia are dating after Paradise. They bonded even more during the Aug. 19 episode with Tayshia enjoying her poolside chat with the smitten JPJ. Just like they fell in the pool, JPJ claimed he was falling in love with the second runner-up of Colton's Bachelor season. But their relationship status post-Paradise is a major question mark even though indications that they could still be together exist.

Ever since John Paul Jones channeled Romeo, Tayshia has been looking at him in a new light (perhaps what light through yonder window breaks). But the main trailer for BiP Season 6 seemed to hint that they might not last. Bachelor previews are always misleading, but there's no denying that JPJ ends up rubbing sunscreen on Haley Ferguson and kissing her. He's also shown yelling at Derek for the way that he treats women. The trailer then cuts to Tayshia crying, so maybe Derek somehow gets in between them. And there's also the possibility that Tayshia ends up engaged since the trailer highlighted a couple of proposals and she could be the owner of one of those hands.

If you're hoping that JPJ would be the one to slip a ring on Tayshia's finger, there has been one big sign they could be seeing each other after Paradise. As Betches reported, Tayshia posted a photo on Instagram of her fishing on a boat on Aug. 14. A fan reportedly asked if she was on JPJ's boat since he has shared a photo of himself on a boat before and has made his love of fishing clear on Instagram. Tayshia allegedly commented, "lol I live in Newport Beach, remember!? Tons of boats here! ;)" Her cheeky reply wasn't very convincing and the speculation only grew since she deleted the photo.

This isn't the only time that Tayshia has sent some mixed messages. The very same day she posted that boating photo, the podcast Bachelor Happy Hour posted an interview with Tayshia. As Refinery29 reported, she teased her future with JPJ to hosts and former Bachelorettes Ali Fedotowsky-Manno and Rachel Lindsay. After noting how much she loves JPJ's hair, Ali asked what else Tayshia could share about their relationship.

"You guys might just have to watch and see how that plays out," Tayshia said.

But then, moments later, when talking about what she has been doing since Paradise, Tayshia said, "I'm enjoying myself being single."

Maybe Tayshia really is single ... or maybe she is just trying to throw Bachelor fans off the scent of her relationship with JPJ. After all, as shown below, they shared a little banter on Twitter on Aug. 14 too.

But again, things get confusing since Tayshia hinted that there could be some impending trouble in Paradise for her and JPJ on Bachelor Happy Hour. While talking about the challenges the couples face in the drama-fueled atmosphere created by BiP, Tayshia said, "Just imagine... someone seeing that you guys are fighting and one other person is like, 'You know what? I guess it's my time to walk in and talk to you.' And you can't do anything about it, you just have to let it go." She added, "I cried every day, you guys! Paradise was difficult, it's hard."

Whether JPJ was ever a reason for Tayshia's tears is something Bachelor in Paradise fans will see as this season continues. And in the meantime, follow Tayshia on Instagram to see if she shares any more cryptic posts.