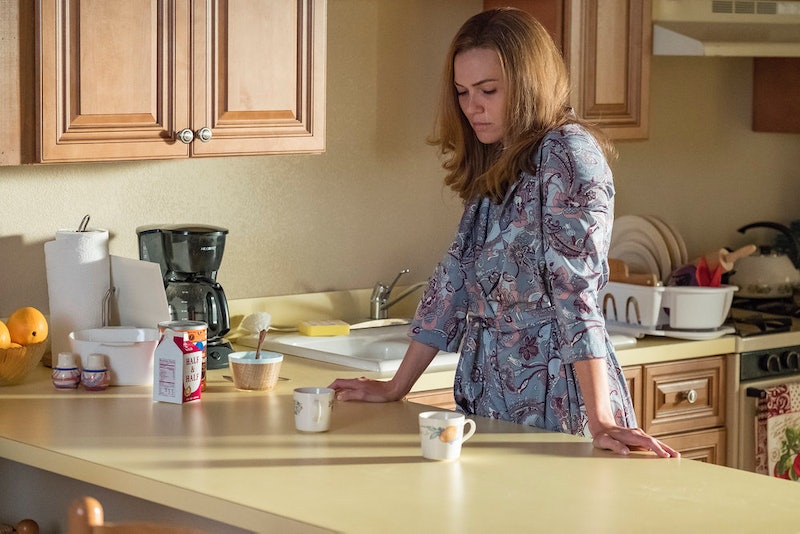 If there's one show that is overly abundant in opportunity for intricate and shocking fan theories, it's definitely This Is Us. Creator Dan Fogelman has so effectively written holes into the plot that are asking to be filled, and of course, fans can't wait five seconds before they're conspiring what will fit. That's the case for the lingering "Her" theory that has carried over from the Season 2 finale. A flash-forward to an older Randall finds him telling a grown Tess that it's "time to go see her." Tess replies with, "I'm not ready." Many people, at first, thought they could be referring to an ailing Beth, but now that Season 3 is in full swing, there are actually even better clues that Rebecca Pearson is "Her" on This Is Us.

All of that could change in the matter of one episode, knowing how action-packed each one tends to be. But with the information at hand, it's likely that the future Randall and Tess are on their way to see Rebecca, who could be reaching the end of her life. Let's face it, if Randall is greying, Rebecca has reached an inevitably trying age.

The Season 3 premiere reaffirms this notion with another clip from the future. As Randall and Tess move to be on their way to what is, for now, an unknown destination, he rings his (possibly ex) brother-in-law, Toby. An older, visibly distraught Toby answers the phone. Randall asks, "You coming down?" Toby responds with, "I don't know if I should," to which Randall replies, "She wants you to be there, Tobe."

Fans have since pointed out that Toby's left ring finger is sans-wedding band in the scene, so he could be avoiding contact with Kate in his response. But that doesn't necessarily mean Kate is "her," as one Reddit user pointed out. The "she" in, "She wants you to be there," could be referring to Kate, who is taking care of "her," or Rebecca, who is ill. That explains Toby's uncertainty, Randall's insistence on him being there to support them both, and Tess' sadness about the entire situation. Even if future Toby and Kate are divorced, they were all family at one time, and would likely feel obligated to support one another, no matter what.

Another clue the "her" is Rebecca — Randall's specific question of, "You coming down?" implies necessary travel south. Could they be meeting in Pittsburgh where the Pearson family originated? It's possible Rebecca returned there to be close to Jack's tree in her older age. Fans know Randall's family lives in New Jersey, Kevin in New York City, Toby and Kate, for now, live in L.A. — it's unclear what other more-southern meeting place they all have in common, if there is one. Pittsburgh and Rebecca make sense.

If Rebecca is in fact "her," and she's in trouble, it makes sense that Randall would be the one to rally the family in her support. After all, he was undoubtedly the closest to his mom as a child. And Kate, who has struggled with her relationship with Rebecca, could definitely use Toby's support during such a time, especially if they just recently separated.

One Reddit user theorized Rebecca develops Alzheimer's Disease and struggles to remember her family, especially Randall, which explains his and Tess' dread for seeing her. Something that dire is about what it looks like for now. Until the next episode of Season 3 reveals another piece of the puzzle.