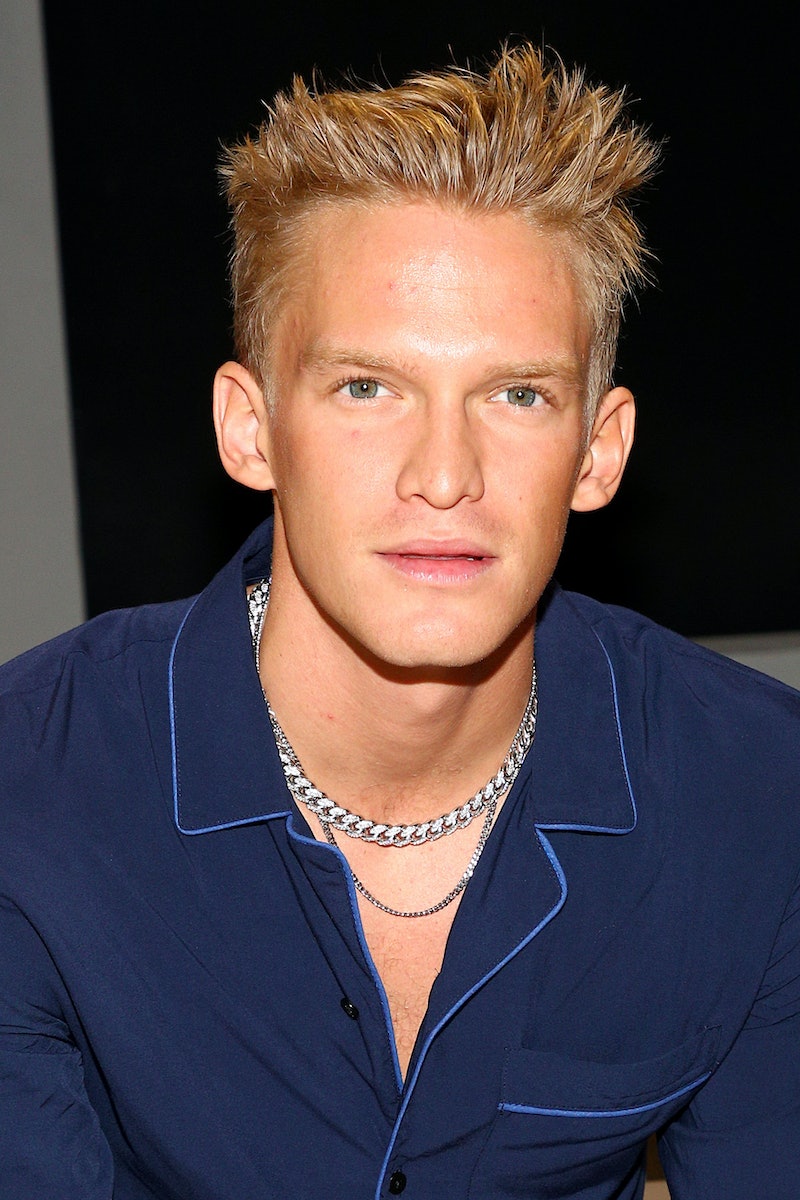 After being spotted kissing multiple times last week, Cody Simpson and Miley Cyrus threw the internet for a loop as a celeb couple no one saw coming. While the two may seem like an unexpected pair, in reality, their connection is years in the making. As E! News originally pointed out, Simpson revealed he had a crush on Cyrus in an interview with Fuse way back in 2012, ultimately foreshadowing that more than seven years later, they'd actually get together.

"Miley Cyrus has always been my childhood celebrity crush," a 15-year-old Simpson said in the video. "I know all the words to her songs... I'm not ashamed about it at all... I was a big Miley Cyrus fan and I think she will be forever the most date-able Disney star." At the time of the interview, Cyrus was 19 and dating Liam Hemsworth. She had Hannah Montana under her belt — as well as movies like The Last Song and three studio albums. Now, according to their recent social media posts, it seems like Simpson and Cyrus are seriously giving things a shot, bringing Simpson's interview full-circle.

After Cyrus and Simpson were caught kissing around Los Angeles last week, the "Slide Away" singer took to Instagram to share a shirtless photo of Simpson on Friday. Declaring this her "hot girl fall," Cyrus off all the traits that make him her type (his age, his abs, and his Australian background).

Cyrus confirmed that she's currently dating in a series of tweets that also called out the double standard she's faced for moving on after her marriage to Hemsworth ended. Acknowledging that men are typically applauded for dating post-breakup, she wrote, in part, "I am just trying to THRIVE/survive in a 'mans' world ... can't I just have a kiss and açaí bowl?!?!"

Going a less direct route than Cyrus, Simpson seemed to confirm the dating news himself by sharing a video on his Instagram Story of him and Cyrus singing along to the song "Ku-U-I-Po" while watching the Elvis Presley film Blue Hawaii. (Bustle previously reached out to reps for Cyrus and Simpson for comment on the dating reports, but did not receive an immediate response.)

It may have started out with a crush, but over the years, the pair has formed a solid friendship. In a 2015 interview with GQ, Simpson even called Cyrus "one of my best friends." "She helps with some of that transitional stuff — trying to escape your childhood," Simpson said at the time. "She's super open-minded and I'm working on becoming more like that." And in an interview with Rolling Stone that same year, Cyrus said Simpson was a "super nice dude and super f*cking talented."

Cyrus' budding romantic relationship with Simpson comes after her month-long relationship with Kaitlynn Carter, which came to an end in September. Before that, she was married to Liam Hemsworth for less than a year after more than a decade of dating. As for Simpson, he was mostly recently linked to model Clair Wuestenberg, who accused him of "emotional abuse" on Instagram in January 2019 without directly saying his name, per JustJared Jr. (Simpson has not publicly responded to Wuestenberg's claims; Bustle reached out to his agent for comment.) Prior to that relationship, Simpson dated Gigi Hadid for about a year before splitting in May 2014.

Considering Simpson had a crush on Cyrus so long ago, maybe fans should have seen this relationship coming all along. But as Cyrus tweeted, "this 'dating' thing is new" to her after being in such a long-term relationship and she's figuring it all out under a very public spotlight.

More like this
Twitter Is Roasting Liam Hemsworth Thanks To Miley Cyrus' New Song “Flowers”
By Jake Viswanath
5 Wild Theories About Miley Cyrus’ “Flowers” Music Video
By Jake Viswanath
Britney Spears Shares & Deletes Photos Of Justin Timberlake From 22 Years Ago
By Jake Viswanath
20 Years Ago, J.Lo Was Supposed To Kiss Madonna With Britney At The VMAs
By Jake Viswanath
Get Even More From Bustle — Sign Up For The Newsletter
From hair trends to relationship advice, our daily newsletter has everything you need to sound like a person who’s on TikTok, even if you aren’t.