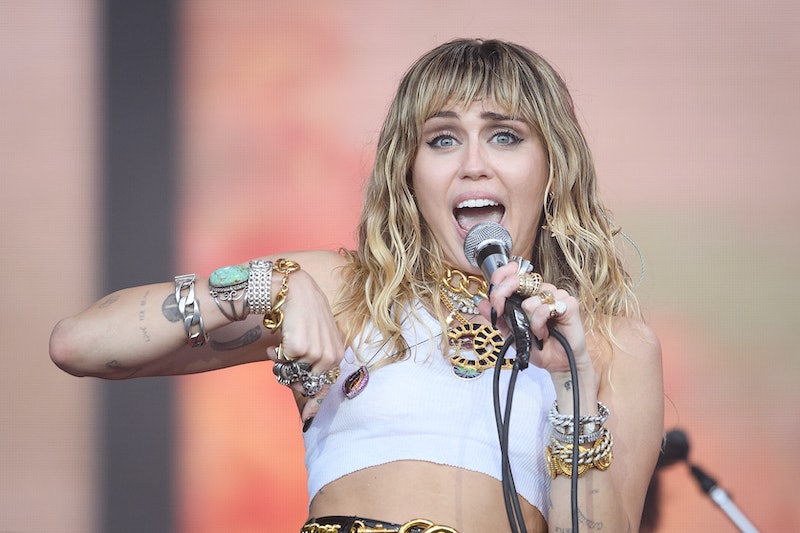 After photos of her getting close to singer Cody Simpson surfaced on Thursday, Oct. 3 Miley Cyrus called out a major double standard on Twitter in a series posts that also confirmed that she's officially back on the "dating" scene after two high-profile splits. On Thursday, the singer was spotted kissing Simpson during an outing in Los Angeles, and according to E! News, it was far from the first time that the longtime friends were spotted showing some PDA over the past week, as they were also seen kissing at a grocery store on Thursday, per E!. (Bustle reached out to Simpson's reps regarding her remarks about the rumors, but did not immediately receive a response.)

However, after her rumored romance with the Australian singer made headlines on Thursday, Cyrus fired back at the "slut-shaming" she has received for moving on after her divorce from Liam Hemsworth and her subsequent rumored brief romance with Katilynn Carter. The singer opened her Twitter posts by explaining that she understands that many of her fans feel protective and invested in her relationship with Hemsworth, as a result of following it from their first meeting on the set of The Last Song just over 10 years ago. "I think that's why people have always felt so entitled over my life and how I live it because they've watched me grow up," she continued, before explains that she's "grown now" and is "making choices as an adult" and not worrying about what her followers may think about them.

And, Cyrus explained, part of making "adult" choices is being able to date whoever she wants without worrying about being shamed for behaving like a normal, 26-year-old woman. "Men (especially successful ones) are RARELY slut shamed," the singer wrote, drawing comparison between the reaction to her decision to date post-breakup, and the response men receive. "They move on from one beautiful woman to the next MOST times without consequences."

"[Men] are usually referenced as 'legends', 'heart throbs', 'G', 'Ladies Man' etc... where women are called sluts/wh*res!" Cyrus continued, adding, "I am trying to just THRIVE/survive in a 'mans' world... if we can't beat em, join em!" In addition to calling out an extremely common double standard, Cyrus explained that "this 'dating' thing is new for me too," since that she was in "a committed relationship" with Hemsworth for most of her teen years and early twenties. And while that might make dipping her toes back into the dating pool a new experience for both her and her dedicated fans, she refuses to hide her relationships away and date like a "recluse."

Cyrus followed through with that idea by sharing a look into her rumored relationship with Simpson on her Instagram Story. On Oct. 4, she posted a black-and-white snap of the shirtless singer showing off his tattoos, explaining that Simpson is exactly "my type," as he is "22, Australian [and has] abs." Cyrus also shared a screenshot of an article about Simpson, in which the author joked that they "can't blame her" for wanting to date the Aussie heartthrob. According to TMZ, Simpson posted a snap of him kissing her head on his Instagram Story on Saturday, Oct. 5, where he referred to her as "baby."

Simpson and Cyrus' PDA-filled outings come after years of friendship for the two singers; they were even rumored to be dating in 2014 and then again in 2015, though a source told E! News in September 2015 that there was nothing romantic going on between them at the time. "Miley is one of my best friends and she helps with some of that transitional stuff — trying to escape your childhood," Simpson told GQ Australia in a 2015 about their close bond. "She's super open-minded and I'm working on becoming more like that."

Regardless of how serious Cyrus' new relationship with Simpson is, it seems only fair that she be allowed to explore this new phase of her life in whatever way she chooses. As she explained in her Twitter posts, this is just where Cyrus seems to be at in her life.

More like this
Twitter Is Roasting Liam Hemsworth Thanks To Miley Cyrus' New Song “Flowers”
By Jake Viswanath
5 Wild Theories About Miley Cyrus’ “Flowers” Music Video
By Jake Viswanath
Paris Hilton & Carter Reum’s Relationship Timeline Includes A Surprise Baby Boy
By Bustle Editors
Everything You Need To Know About Kanye's Post-Kardashian Dating Life
By Bustle Editors
Get Even More From Bustle — Sign Up For The Newsletter
From hair trends to relationship advice, our daily newsletter has everything you need to sound like a person who’s on TikTok, even if you aren’t.