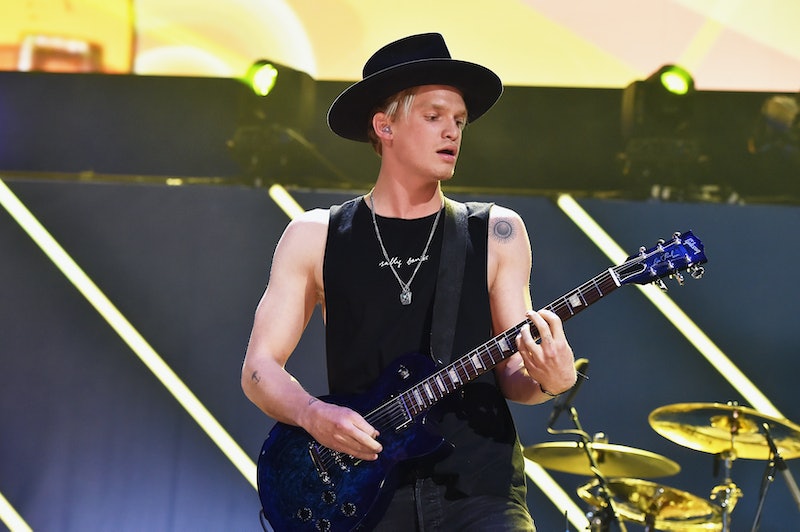 It looks like Cody Simspon is making a play for "Boyfriend of the Year" with his newest single. On Friday, Simpson released "Golden Thing," a song he wrote for Miley Cyrus. And the lyrics prove that the Australian singer is clearly smitten with his new love.

Simpson originally serenaded Cyrus with "Golden Thing" last week, when she was in the hospital recovering from tonsillitis, and the "We Can't Stop" singer quickly proclaimed it to be "my favorite song ever" on her Instagram Story. In fact, she loved it so much that she insisted he release the song for everyone to hear.

With lyrics describing her as a "crystal dream" and "Cali queen," it's no wonder Cyrus was so taken with the song. "I’m shot / It’s a golden thing she’s got," Simpson sings in the chorus, explaining just how taken he is with his new love. In addition to highlighting how smitten he is, the lyrics also highlight a musical connection between the pair, with Simpson singing during the bridge, "I sing softly to her / In the last daylight ... And if we could be heard / For whatever it's worth / The rulers in the sky / They'd cry."

The singer continued to underline the special nature of their new romance in the final chorus, where he flips the lyrics to declare, "It's a golden thing we've got." Like Cyrus — who, he noted in an Instagram Story from last week, he sees as "golden" and special — Simpson thinks that his relationship with her is also something valuable and remarkable. In other words: the Aussie singer has clearly fallen hard for his longtime friend.

In a recent interview with People, Simpson explained that it is that friendship that makes his new relationship with Cyrus so special to him. "The reason why it hasn’t been a really crazy sudden thing is just because we’ve been friends for so long," Simpson said, adding that the pair "found each other again in a space where we’re both not partying, working real hard, and it just keeps things healthy and it’s good." The singers were first rumored to be dating back in 2014, and then again in 2015, but both Simpson and Cyrus told press at the time that they were just close friends.

"Any girlfriends I’ve had in the past has always been immediate romance and so it’s a different experience having been friends with somebody before and it developing naturally into something more," Simpson told People. He also noted, "We just have a ball, yeah, and that’s the most important part of a relationship, you know?"

The singer also told the outlet that it was Cyrus who pushed him to release "Golden Thing" after he first played it for her in the hospital. "I wrote her a song this week that she’s pretty much forcing me to put out," he said. "She was like, 'If you don’t put this sh*t out, I’m putting it out on your behalf for you. I’m getting your Spotify login and doing this sh*t myself.'"

No wonder Simpson paid homage to his new muse by making the cover art for "Golden Thing" a photo of Cyrus.