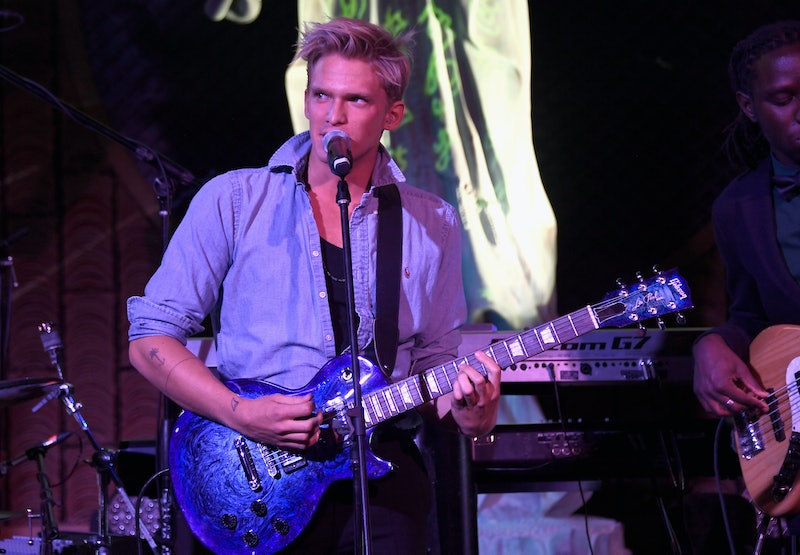 Miley Cyrus' latest health setback has become an opportunity for her to share how she's feeling about her new beau. As she shared on Instagram, Cody Simpson visited Cyrus in the hospital while she's recovering from tonsillitis. The Australian singer arrived at her hospital room on Oct. 8 with roses and his guitar to perform an original song he had wrote for Cyrus. And, not only did he make Cyrus feel "much better," but hewas even identified as her "bf" on Insta, indicating that this relationship is more serious than it first appeared.

Cyrus was hospitalized on Tuesday for tonsillitis. She's been keeping her fans updated on her health via Twitter and Instagram, asking fans to send her good vibes and showing off visits from her mom, Tish Cyrus. But the biggest dose of good vibes came courtesy of her new beau. As seen on her Instagram Story, the Cody Simpson and the Tide band leader serenaded her with a song he wrote for her, called "Golden Thing." Simpson also shared a video of him singing to Cyrus on her hospital bed. In Cyrus video, he sings, "It's a golden thing she's got" while strumming an acoustic guitar at her beside. Cyrus proclaimed it's "my favorite song ever" and her Instagram Story had even more video footage of the song.

"Suddenly I am feeling much better," Cyrus wrote over her video post of his song. She called "Golden Thing" the "sweeeeeetest song," and proclaimed she wanted Simpson to share it with the world. "It's too special to be only heard in full by my ears, so I am currently pressuring him to DROP IT next week...& it's working #GoldenThing," she added.

This may not be the first time that Simpson was moved to create art based on his brief courtship with Cyrus. On his poetry Instagram, Prince Neptune, Simpson shared a poem that fans assumed was about Cyrus. The poem referenced Elvis Presley, which, as noted by E! News, could relate to their recent date spent watching the movie Blue Hawaii. Cyrus and Simpson also discussed his love of Elvis in her hospital posts. "You can't take this guy anywhere," Cyrus teasingly said, to which Simpson replied, "I just rip some Elvis everywhere I go."

Rumors that Cyrus and Simpson were dating began Oct. 3 when they were spotted kissing in a Los Angeles grocery store. This came after her breakup with Kaitlynn Carter, whom Cyrus dated for a month following her split from husband Liam Hemsworth in August. But the pair have known each other for years with Simpson calling Cyrus "one of my best friends" in a 2015 interview with GQ Australia. A 15-year-old Simpson even said he had a crush on Cyrus all the way back in 2012. So while their romantic relationship has accelerated quickly, they have a long history.

When her split with Carter was announced, a source told People that Cyrus didn't want a "serious relationship." Nevertheless, Cyrus calling Simpson her "BF" (or boyfriend) on Instagram could hint to a more serious romance brewing. No matter their official status, Cyrus has made it clear that her private relationships aren't for the public to judge and for now, she's just enjoying being serenaded by her new boyfriend.

More like this
Selena + Chef Season 4 Was Filmed At Hannah Montana's Old Malibu House
By Jake Viswanath
Who Is Bad Bunny Dating? Gabriela Berlingeri's Vocals Are Featured On His Song "En Casita"
By Radhika Menon
Demi Lovato's New Song "29" Hints At Their Age Gap From Ex-Boyfriend Wilmer Valderrama
By Jake Viswanath
Beyoncé & Jay-Z's Relationship Timeline Proves They're Still "Crazy In Love"
By Jake Viswanath
Get Even More From Bustle — Sign Up For The Newsletter