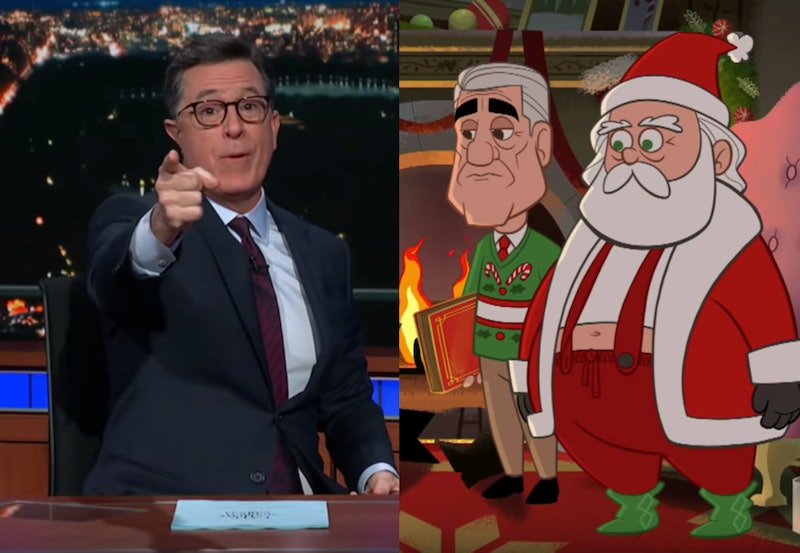 Only a mind like Stephen Colbert's could imagine a universe in which Santa Claus and Robert Mueller served together in Vietnam. That's the cartoon world Colbert designed in "A Very Special Counsel Christmas," a skit that portrays the two elderly men trying to save the holiday from President Donald Trump and stop a border wall that's being constructed out of wrapped presents.

The Mueller investigation is one of Colbert's favorite topics to cover on his show, and he's done so with holiday pizzazz before. Last month he wrote a carol in honor of "Mueller Claus," who he joked was "comin' to town" with the knowledge that Trump had "been bad." This six-minute sketch was even more involved, and was animated by the artists behind the show Our Cartoon President, which Colbert produces.

"Many of our go-to holiday traditions don't accurately reflect the national mood," Colbert said to introduce the Christmas cartoon. "With that in mind, the little elves here at The Late Show came up with a Christmas special tailor-made for these trying times."

The sketch opens with Trump firing Santa and replacing him with "Rick," who he describes as the "bearded guy I see at all my rallies." Rick turns out to be a Trumpian version of Saint Nick — he's bearded, plump, and wearing red, but shirt is a Confederate flag, and he's wearing a camo MAGA hat.

Rick gets airlifted to the North Pole by helicopter, where he greets the crowd with a rowdy, "Hellooo, Munchkins!" (They respond: "We're elves, you bigot!") Police detain the elves and take them to the border, where they're put to work preventing migrants from the caravans from entering the country.

Santa has just about given up hope of getting his job back — he's sitting in the dark getting drunk on milk — when Mueller shows up and references that they're both veterans from Nam. Colbert even fits in an Apocalypse Now reference; "I love the smell of nutmeg in the morning," Santa says to his friend, who's wearing an eccentric holiday sweater and sipping from a mug. "Smells like... victory."

Mueller was apparently saved by Santa during the war and therefore owes him a favor. They peer over a "Naughty & Nice List," but even though it lists Trump as having stolen a lollipop as a kid, Mueller says, "I'm sorry, Kringle, but we need hard evidence of collusion." That evidence quickly comes in the form of a "pee pee tape," which was recorded by an elf stationed in Moscow.

Down by the border, Rick is putting the finishing touches on a border wall of presents ("Even George Soros can't stop us now!" he tells the president). Just before it's finished, Santa and Mueller publicly broadcast the "pee pee tape," which not only reveals Trump having an affair with Russian prostitutes, but also concocting a collusion plot. "I will later collude with Vladimir Putin to become president," cartoon Trump says. "I am guilty."

Santa is restored to his position and Christmas is saved. At least, in Colbert's cartoon universe. In the real world, the actual Trump is celebrating Christmas Eve with an angry tweetstorm.