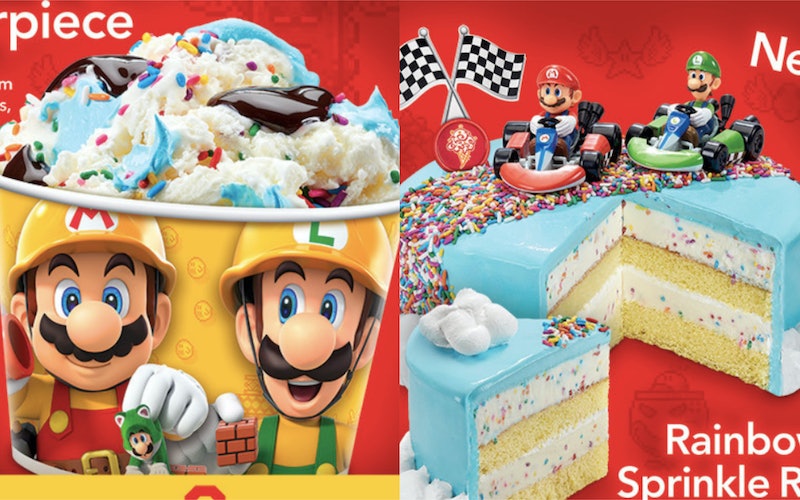 Excellent news for anyone who’s been longing for a new and icy cold way to feed their inner child: Nintendo and Cold Stone Creamery have teamed up on a pair of Super Mario-themed Cold Stone ice cream treats. You can grab these treats at any participating Cold Stone Creamery location from now through the middle of October. As Sara Schmillen, VP of marketing for Cold Stone parent company Kahala Brands, put it in a statement, “No matter what your age, there are two things almost everyone can enjoy — ice cream and video games” — and you know what? She's right. And to be perfectly honest, I am not at all mad about being able to eat Mario-themed ice cream while I dive into Mario Maker 2, which I have fortuitously acquired just this last week. Heck, and yes.

News of the collaboration first leaked about two weeks ago, when a Reddit post went live on the r/Nintendo sub featuring a photograph of an ad for the new treats. The image included in the post has since been deleted; however, several Nintendo-centric gaming sites picked it up prior to its deletion, so we’ve still got record of its existence. In any event, the imaged offered plenty of details about the collaboration — details which we now know to be accurate.

The stars of the show are the two Mario-themed ice cream treats. One of them, Mario & Luigi’s Masterpiece, is a “Creation” — the made-to-order combination of ice cream and add-ins mixed right in the store using two little metal spades and a frozen slab of granite for which Cold Stone is perhaps best known. The Nintendo-themed Creation features sweet cream ice cream combined with rainbow sprinkles, blue frosting, and fudge.

The other treat, Rainbow Sprinkle Road, is an ice cream cake. Named for the fan-favorite Mario Kart course Rainbow Road — which, by the way, first appeared in the very first Mario Kart game, Super Mario Kart for the SNES, and has subsequently reappeared in pretty much every Mario Kart game released since — the confection layers together yellow cake and sweet cream ice cream with rainbow sprinkles before topping the whole thing off with blue frosting. The publicity image of the cake also features Mario and Luigi cake toppers racing on a “road” made of rainbow sprinkles.

But the treats themselves aren’t the only things Cold Stone and Nintendo have up their metaphorical sleeves. Three limited edition Gotta Have It cup designs are also available — one in honor of the recently-released Mario Maker 2, one themed after Mario Kart 8 Deluxe (the 2017 Switch port of the 2014 Wii U release Mario Kart 8), and one based on Yoshi’s Crafted Word. You’ll also get a limited edition Nintendo point code card whenever you buy a Mario & Luigi’s Masterpiece or Rainbow Sprinkle Road.

Here’s what the cups look like, for the curious:

Ugh. I love them all.

Nintendo certainly seems to be leaning into the whole dessert collab thing lately; earlier this summer, the Super Mario Bros. x Sugarfina collection arrived, bringing gummy Invincible Stars, chocolate “Princess Pearls,” and loads of other edible Mario-themed items to Sugarfina’s popular Candy Cubes and Bentos. One of the two Mario-themed Candy Bentos even played the iconic Super Mario theme song when you opened it up. Alas, the Bentos don’t seem to be available anymore, but you can still grab most of the Nintendo Candy Cubes online at Sugarfina’s website.

But if gummies or chocolate aren’t really your thing, then the Cold Stone collab might be more your speed. You can get the Nintendo-themed Creation and ice cream cake at participating Cold Stone locations between Aug. 28 and Oct. 15, 2019. Just make sure you don’t spin off the track!