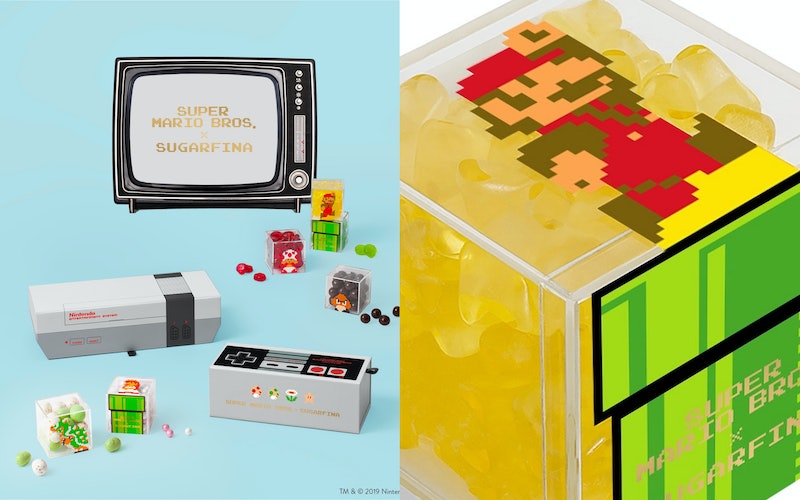 There’s no denying the thrill of experiencing the latest and greatest in the gaming world — but there’s something to be said for retro appeal, too. And if 8-bit graphics do it for you in a way that nothing else does — and you happen to have a bit of a sweet tooth — this collab is for you: The Super Mario Bros. x Sugarfina candy collection brings all your favorite retro Nintendo characters from the Mario franchise to life in the most delicious way possible. The collection will be available online and in Sugarfina stores starting on Monday, July 22, following a July 17 preview at San Diego Comic-Con. How’s that for some sweet news?

Originally started by candy-loving couple Rosie O’Neill and Josh Resnick in 2013, Sugarfina has become widely known in recent years for its grown-up, yet fun sweets and treats. From rosé-flavored gummy bears to the cereal-inspired “Candy For Breakfast” line, there’s a little something for everyone here — and while they’re not exactly cheap (a small, three-to-four-ounce box of Sugarfina’s gummies or chocolates usually costs around $7.50), they’re as beautiful as they are delicious, offering a tasty and whimsical dessert option for adults who still kind of like to play with their food.

In that sense, a collaboration between the artisan candy retailer and Nintendo makes perfect sense. Indeed, it even pushes all of Sugarfina co-founder Rosie O’Neill’s nostalgia buttons: Said O’Neill in a press release provided to Bustle, “I spent many Saturday mornings playing Super Mario Bros. on my classic NES — which I still have! — so this collaboration brought back tons of fun memory from childhood.” If you, too, grew up playing Super Mario Bros., which was released in North America for the Nintendo Entertainment System in 1985, and you have a fondness for sweets, you’ll no doubt find this collaboration positively delightful. (I know I sure do.)

Although you can buy Sugarfina’s gummies, chocolates, and other sweets in 25-pound bulk bags, they’re usually presented in what the company calls Candy Cubes — clear boxes that showcase the treats’ visual appeal. Candy Cubes are available in two sizes: Small, which measures 2.18 inches cubed and holds three to four ounces of candy, and Large, which measures 3.25 inches cubed and holds 10 to 14 ounces of sweets. These cubes are available individually — or, you can put several of them together into a Candy Bento Box.

Sugarfina’s signature presentation style, Candy Bentos take their cues from Japanese bento boxes — single-serving meals made up of small servings of several different elements, divvied up and presented in boxes (and beautifully so, at that). Bentos are good at any time of day, but they’re particularly useful for lunch, when you’re on the go, or both; indeed, most major railway stations in Japan have shops devoted entirely to bentos you can grab and eat on the train.

Sugarfina’s Candy Bento Boxes adapt the bento concept into a sort of modular gift box system which can be filled with different Candy Cubes. Available in sizes ranging from three-piece bentos to 20-piece “candy trunks,” the Candy Bentos allow you to fill a larger box with the Candy Cubes of your choice for a personalized experience; or, you can choose from one of several pre-designed arrangements, like the Sweet & Sparkling collection full of Sugarfina’s best champagne-, rosé-, and other wine-inspired picks.

Given that Sugarfina is as well-known for its Candy Bento Boxes as it is for its individual candies, it’s no surprise that the Super Mario Bros. x Sugarfina collaboration features some specially-designed boxes — but believe you me when I say that these are no ordinary Candy Bentos. There are two varieties, each of which is more spectacular than the last. The smaller version — the Nintendo Entertainment System Controller Candy Bento Box — is designed to look like a classic NES controller; the reusable box contains a drawer which can be slid open and filled with any two Candy Cubes you like. Meanwhile, the larger option — the Nintendo Entertainment System Console Candy Bento Box — looks like an actual, 1985 NES home console and holds three Candy Cubes. But that’s not all it holds; when you open it up, you’ll see the iconic Super Mario Bros. end-of-level castle scene… while the box plays you music from the game.

As Rosie O’Neill said in a press release, “We’ve always wanted to create a Candy Bento Box that plays music and this collab was the perfect opportunity to add a nostalgic touch with music from the iconic game.” Now that’s what I call dedication.

When I say, by the way, that you can fill these two special edition Bentos with any Candy Cubes you like, I do mean that — but, I mean, let’s face it: The hands-down best options are the special Super Mario Bros. x Sugarfina Candy Cubes. It’s worth noting that the candies inside these cubes aren’t actually shaped like Mario characters; you won’t, alas, find gummy versions of Mario "Jumpman" Mario or an army of tiny, chocolate Princess Peach clones inside each Candy Cube. However, you will find Mario character-adjacent items in the cubes — cubes which are, you’ll observe, decorated with adorable pixel art pertaining to the corresponding character.

The cube adorned with Mario himself contains pineapple-flavored, gummy Invincible Stars; in Luigi’s cube are gummy apple Green 1-Up Mushrooms; Toad’s cube grants you cherry-flavored Red Mushroom gummies; the Princess Peach cube offers forth pink and white “Princess Pearls”; inside the Goomba cube are Dark Chocolate Sea Salt Caramels; and Bowser? Bowser’s cube has milk chocolate Marshmallow Eggs. I had no idea that Bowser was even capable of laying eggs, but then again, he is a single parent, so I guess all those kids had to come from somewhere, right?

In addition to filling a Candy Bento with the Nintendo-themed Candy Cubes, you’ll also be able to buy them individually — and if you want to dress up a single cube a little bit, you can do that, too: The final item of the collection is a Question Mark Block gift box that holds just one cube. Hide the cube of your choice inside and gift it to your favorite Nintendo fan to, as the press release suggests, “keep them guessing.” (Just, y’know, make sure they know that they don’t have to punch the box in order to find out what’s inside. Super Mario Bros. is, after all, just a game.)

Each Candy Cube will be priced at $7.50 a pop, with the two-piece NES Controller Bento running at $20 and the three-piece NES Console Bento clocking in at $30. After an exclusive preview at San Diego Comic-Con on July 17, they’ll launch in-store and online on Monday, July 22. Head on over to Sugarfina’s website for more. And in the meantime, I promise that your princess isn’t in another castle this time.