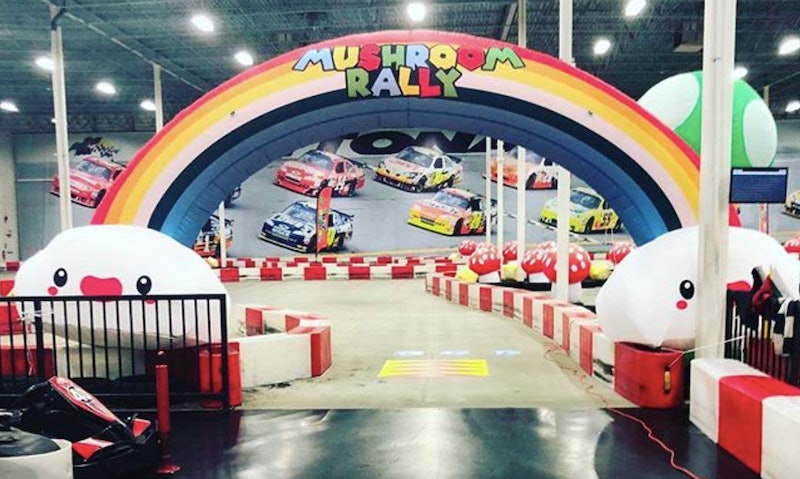 Playing Mario Kart on a Nintendo console is all well and good — but if you’ve ever wanted to know what’s it like to actually drive through your favorite Mario Kart levels in real life, good news: Now you can. An interactive event called Mushroom Rally brings Mario Kart-style racing to life, complete with actual go-carts and — even better — costumes. You heard me: You can dress up like the titular plumber, Princess Peach, Yoshi, Toad, or any of your other favorite Mario characters and speed along a go-cart track for real. You’ll have to wait until Mushroom Rally comes to your city to do so, of course — but the good news, the event travels around a lot. As such, your chance to fling a red shell at someone in real life might be closer than you think.

Mushroom Rally is the creation of Australian-based immersive events company Viral Ventures, according to the Miami New Times. Viral Ventures is known for such events as the Floating Cinema, Brick Bar, and Ball Pit Party; I might go so far as to say that they specialize in creating interactive experiences for grownups that capture the spirit of childhood. The earliest Mushroom Rally events were held in Australia in 2018, per the Mushroom Rally Instagram page — and since then, they’ve gone global, putting on events in Canada, the UK, and the United States. Tickets are usually sold online — typically either on Fever or Eventbrite, depending on the locale.

The track layout varies a little depending on what’s available in each location, but they’re always full of Mario Kart-themed decorations and inflatables. To be perfectly honest, it looks like a blast, if this video is anything to go by:

On race days, all racers race once, according to the Mushroom Rally website; then the winners of each preliminary race participate in a second race for prizes. Additional games are also available to play at each event, too, during which you can collect stars (more on those in a bit), along with other activities and entertainment to keep you busy when you’re not racing or collecting stars (there’s typically a DJ onsite to provide some tunes, for example). Costumes of all your favorite Mario characters are even included in the price of your ticket; you get to pick one out when you arrive to wear while you race.

You don’t need a driver’s license to race (they’re go-carts, after all, not real cars; you also won't be on the open road, but rather on a closed, typically indoor go-cart track), although you will need to bring an ID with you along with your ticket. Each city does have their own requirements when it comes to age and height, though, so make sure you check the details on the specific Eventbrite or Fever page for your race before you book a slot. Also, each racer can bring one guest with them as a spectator — choose wisely!

Mushroom Rally’s 2019 tour began in Los Angeles in March. In the months since, they’ve hit Denver, Houston, Miami, Cincinnati, and Columbus; next up are Cleveland in September, Pittsburgh in September and October, and New York in October. Each city’s stop is more than just a standalone event, however; they’re all building up to one, big, final race. The finals will be in Las Vegas in December, where 20 finalists drawn from all the races in each city will face off for the ultimate Mushroom Rally championship title.

Originally the tour was intended to land in 16 cities; it’s not clear whether that’s still the case, as several comments on Facebook note that some of the events, such as the ones that were scheduled for Dallas and Indianapolis, were cancelled. (Refunds have reportedly been issued for the cancelled events.) If you’re considering attending one of the remaining events for 2019, your best bet will be getting in touch with Mushroom Rally through their contact form to confirm that the event scheduled for your city is still on before you buy tickets.

According to Mushroom Rally’s website, there are three ways for racers to qualify for the finals in Las Vegas: First, by having the fastest lap time in your city; second, by collecting the most stars in your city (remember those? Note, though, that only the top three star collectors in the country will be eligible for the finals); and third, by lottery (each person who buys a ticket is entered into a lottery for a slot in the finals; the winner will be announced on Facebook live). You do have to be over the age of 21 in order to race in Las Vegas, though, so, uh… sorry, under-21s. Come back when you’re older.

It’s worth noting, by the way, that Mushroom Rally is unaffiliated with Nintendo itself; as they put it on their website, they are “a fancy dress go karting experience” and “not associated with Nintendo or any other brand.” Other similarly unofficial events have gotten in hot water with Nintendo before; a company now known as Street Kart, for example — a themed go-cart experience in Japan that sees you literally driving through the streets of Tokyo while dressed up as various fictional characters — was originally called MariCar and marketed as a Mario Kart-themed experience… until it was sued by Nintendo in 2017. Nintendo won the suit, requiring MariCar to change its name, stop offering Nintendo costumes, and place signs all over the place — both online and in real life — specifying that they are “in no way a reflection of Nintendo [or] the game Mario Kart.” Street Kart now calls its experience “Real Life Superhero Go-Karting.”

Will Mushroom Rally have the same issue? They haven’t yet, so at least there’s that. If you’re interested in giving the race a shot, you can see a full list of scheduled events at Mushroom Rally’s Facebook page and website. Good luck, racers!