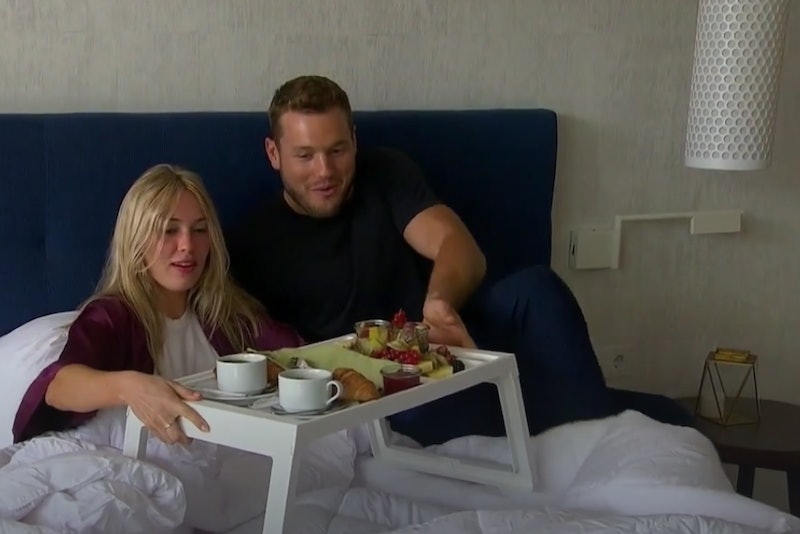 It finally happened, America. Colton and Cassie had their fantasy suite date on The Bachelor. It was obviously meant to be romantic, especially after Colton chased Cassie down and convinced her to be with him after he jumped that fence. And while they may have had a perfectly good time when the cameras left, Colton and Cassie's fantasy suite date first started with awkwardly kicking out the rest of The Bachelor crew.

Colton told the room full of producers, sound experts, lighting technicians and camera operators that he loved them, but that they had to leave. He and Cassie even hung a "do not disturb" sign on the door for good measure. It doesn't really set a sexy vibe when you have to remove a giant cohort of near-strangers from your hotel room, basically by telling them you need to be alone with your partner — especially when all of them know that you're famously a virgin. But hey, you gotta do what you gotta do.

Twitter definitely took notice of how weird the situation was. While one crew member was shuffled out he door, he looked back at the newly reunited couple and wished them luck, basically solidifying once and for all how incredibly weird this situation is.

Memes and jokes immediately arose from fans who compared the departing Bachelor crew to everyone from Regina George's Mean Girls mom to bar patrons being tossed out after last call. It was a moment.

After a season of never-ending reminders that Colton is a virgin (I've been counting), it finally seems like the show might deliver the conclusion to this plotline it's so desperately clung to. But no! Cassie and Colton are shown in bed together the next morning, but no details are given — Colton says they had a great night, and grew as a couple, but a "gentleman doesn't kiss and tell." People should use their imaginations, he says.

When Cassie and Colton join Chris Harrison onstage during the live portions of the finale, Colton asked fans to do just that. Colton said he knows he's been open with his virginity in the past, but now that it directly involves Cassie, too, they're going to keep those details to himself. Maybe they should have done that from the get-go, but I digress!

It's been pretty excruciatingly weird to watch The Bachelor make Colton's virginity such a plot point this season. It's totally fine that he's been open about being a virgin — it's nothing to be ashamed of whatsoever, and has nothing to do with "how much of a man" he is. If he wants to talk about it, he should. But the show has realllllly leaned into it to the point that at times, it's all Chris Harrison could talk about.

It might have been better to let them have a normal fantasy suite — or at least as normal as reality TV overnight dates can be — without all the added pressure that was so obviously present. But Cassie and Colton seem happy with where their journey has taken them, regardless of the awkward moments, and in the end, that's really all that matters.