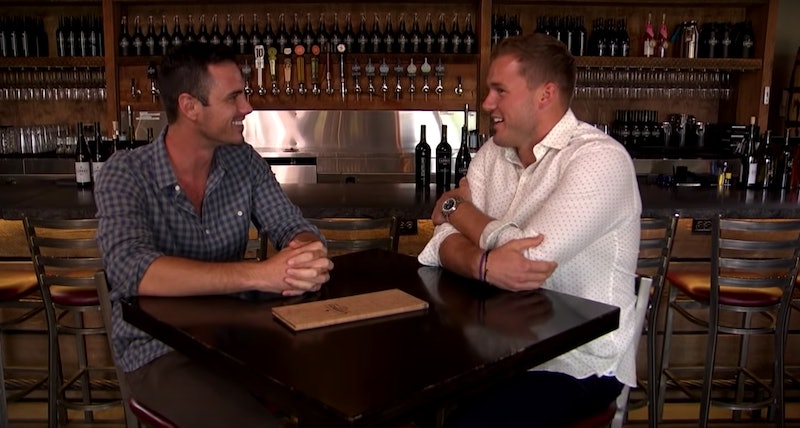 How, oh how, will the two-night extravaganza that is The Bachelor season finale pan out? Hard to say, but there is at least one esteemed member of Bachelor Nation who isn't rooting for a proposal. In a recent interview with Entertainment Tonight, Ben Higgins said Colton Underwood shouldn’t propose to Tayshia Adams or Hannah Godwin. You know, because of that whole thing where he hopped over a fence after he got dumped by Cassie Randolph. The former Bachelor explained, "I don't think it would be fair to [Tayshia or Hannah G.], especially after we watched what just happened.. [for Colton to end the show] with an engagement.”

In case you live under a tall fence that a former professional football player could hop over in one swift motion, here is a quick rundown of what it is Ben's talking about. On last Monday’s episode of The Bachelor, season front-runner Cassie's father surprised her at her hotel in Portugal. His mission: make sure Cassie was listening to her heart and not rushing into a serious relationship with someone she doesn't really know. After her conversation with her dad, Cassie met up with Colton for their Fantasy Suites date... and broke up with him.

Colton tried to change Cassie's mind, telling her that they did not have to get engaged at the end of the series if they were not ready to take that step; all that mattered to him was that they be together. But his words were all in vain. Cassie’s heart was not in it, and it would not have been fair to Colton if she stuck around. So she did not stick around.

Shortly after Cassie made her exit, Colton attempted to leave the show, too. He removed his microphone, grabbed his wallet, left his villa, tuned out Chris Harrison’s pleas, jumped a fence, and disappeared into the night. Needless to say, Colton did not take the breakup very well.

Colton made it clear that he is in love with Cassie and was in it for the long haul, essentially spoiling who he planned to propose to at the end of the season. However, now that Cassie's gone, that option is ostensibly out the window (assuming there isn't some big twist where she returns, that is). Tayshia and Hannah G. are still on the show, but it sounds like the dude only had serious eyes for one contestant. As Ben put it when speaking with Entertainment Tonight, Colton “only wanted Cassie.” He continued, "I don't know, at this point, how he looks around himself and goes, 'Yeah, the other two women still have a chance.'"

And if Colton were to propose and/or pursue a post-show relationship with either of the remaining contestants, the second half of last Monday's episode sure would be a tough pill for that relationship to swallow. Who wants to start dating and/or get engaged to someone on national television only to find out you are not their number one pick? As enthralling as Arie Luyendyk Jr.'s season finale was, watching Becca Kufrin be blindsided on national television was devastating. No one deserves to go through that.

May Colton make a decision that'd make Ben proud, and may the finale not jump the fence, er, shark.