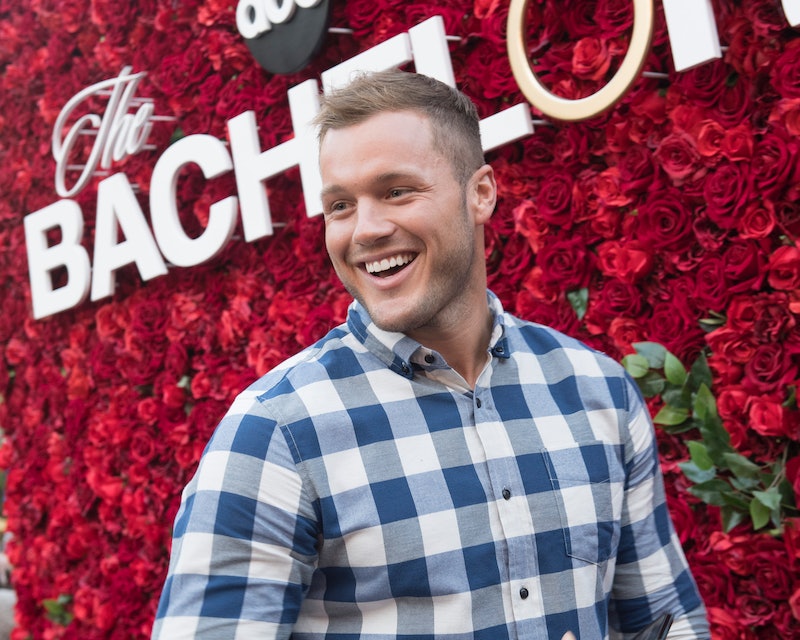 Nobody ever said that being the star of The Bachelor is easy, but it seems like Colton Underwood has found his own ways to cope this season, especially when it came to Monday night's rollercoaster of an episode. Colton drinks white wine on The Bachelor, and fans have been buzzing about his drink of choice all season — and TBH, most people are commending him for having good taste.

To be fair, it seemed like he needed a way to wind down in the moment after a day that involved a lot of ups and downs. After a successful date with Heather (that involved giving her her first kiss and plenty of fireworks), Colton was immediately confronted by Elyse, who just didn't think that the process of The Bachelor was for her and decided that she needed to leave.

So what happened? Well, he whipped out a bottle of white wine and poured himself a glass, because it was clearly a hard day and he needed to treat himself. And seeing his vlog from the next morning, it was clear that he'd been very emotional about it all, so it makes sense that he'd want to spend that night relaxing with a glass of vino.

Upon seeing this, Twitter went absolutely wild. A lot of people are here for wine-drinking Colton, because white wine is definitely A Choice that he has made at almost every single cocktail party.

Some fans felt like Colton had become more relatable than ever after they watched him pour himself a glass of wine immediately following what seemed like a pretty brutal breakup:

Others were a little bit flabbergasted by his choice, because it wasn't necessarily what they'd expect from Colton. But of course, white wine is for everyone, y'all — including former NFL players who are looking for love on reality television. It's 2019!

And surprisingly, some people saw Colton drinking white wine as making him less likable. If you're a red wine person, it makes sense; people will fight to the death over their choice of wine if they're passionate enough about the subject.

But really, how could anyone truly compare Colton and Post Malone?

Others had to bring up the bottle of wine itself:

And others were simply understanding of the fact that Colton would want to pour himself a glass of wine and sit on the couch, because haven't most of us been there after a very bad day?

Wine is a very popular beverage in the Bachelor mansion; it's pretty common to see contestants with a glass in their hand, especially during the cocktail parties all season long. Now, we know that Colton is totally following suit, even if he's just hanging out alone in his hotel room in Thailand.

Whether he's drinking white wine, red wine, beer, liquor, or water, Colton's drinks are all his own choice. But just in case he's wondering, there are a lot of fans out there who have given him their seal of approval.