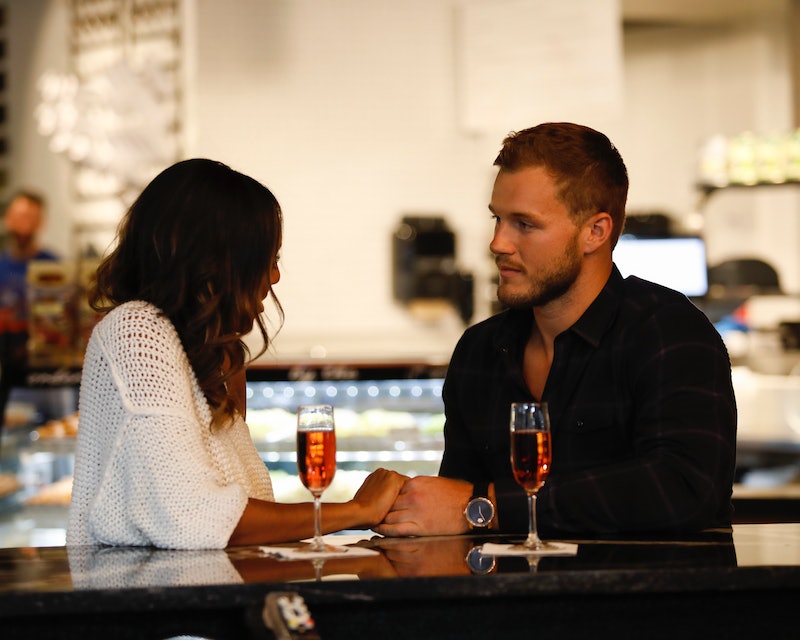 With Colton facing his first Bachelor fantasy suite date, it was only expected that The Bachelor producers would amp up the "sexy" factor as much as possible. In case you haven't heard, Colton is a virgin heading into this season, and these overnight dates put a renewed spotlight on that fact. Instead of breezing by his personal, private history like they could (should) have, producers majorly play up the sexual tension, making Tayshia and Colton's Bachelor fantasy suite lead-up more than a little cringey.

The two obviously have a major connection, and the awkwardness was definitely not their fault. Colton made some jokes that were a little heavy handed, but hey, he's nervous! The major issue, truly, was that producers played sexy music, had them open a sexy bottle of champagne, and really put all the pressure they could on Colton's situation that they could.

It also appears that when Colton was talking to the camera one-on-one, he was being prompted to reveal more and more of his sexual history. A producer isn't visible or actually detectable, so I could be wrong, but it felt like he was answering questions, not necessarily offering this information for no reason. He's done stuff, he said, but not gone all the way. It was just WAY more information than any of us needed, and it feels kind of gross to watch. If everyone knows Colton's already going through losing his virginity on live television, maybe that's all the detail we needed.

As viewers learn in what felt like yet another strangely public invasion of privacy, Colton and Tayshia didn't have sex, according to their respective in the moment interviews. They stayed up all night talking instead, which is perfectly fine. "Last night was new territory for both of us. It was interesting. I don't know when was the last time Colton spent that time with a woman, so going into this fantasy suite I could just tell how nervous he was," Tayshia told the camera. "I wanted to be supportive and not influence him in any way. So, we didn't have the physical intimacy that I wanted, but I got to see him for who he truly is, and it just validated my feelings for him," she added.

Only time will tell how exactly the rest of the fantasy suites will play out. I hope the show won't continue to paint this picture each and every time Colton is about to enter a bedroom with a woman, but it probably will if he goes on other fantasy dates.

Colton's virginity has been a constant point of focus for The Bachelor this season, despite all the prior promises that they wouldn't linger much on the subject. The Bachelor has always been about watching strangers find love, and it's always been a little invasive as all reality dating shows can be. People put themselves out there, and lay their hearts on the line, and that can't be easy. Colton's said in the past that he's not ashamed of being a virgin — and he shouldn't be! — and if he wants to speak about his sexual past, he should.

But that doesn't make fantasy suites feel any less uncomfortable for Bachelor viewers who would much rather not be involved in each and every personal detail, especially when the show seems determined to dole them out.

More like this
Tamra Judge & Vicki Gunvalson Gave A Hopeful “Tres Amigas” Update
By Brad Witter
Howard Stern's Net Worth: Is He The Richest Man In Radio?
By Hugh McIntyre
The 'Love Island' Contestants *Do* Know Who Gemma's Dad Is, After All
By Bustle UK
Only 3 Of The One That Got Away Couples Seem To Still Be Together
By Brad Witter
Get Even More From Bustle — Sign Up For The Newsletter