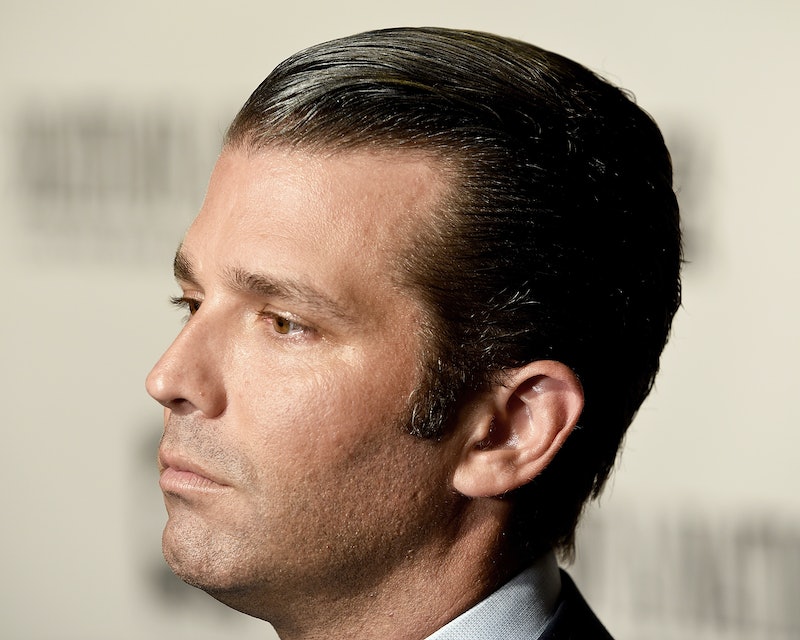 Axios reported Wednesday that Congress has subpoenaed Donald Trump Jr. to testify about matters relating to Congress' investigations into Russian election interference and the Trump administration. If true, this would be the first time one of President Trump's children has been the subject of a Congressional subpoena, according to Axios.

The subpoena was reportedly issued by the Republican-led Senate Intelligence Committee, The Washington Post reported. Bustle has reached out to the committee and its chair, Sen. Richard Burr, as well as the Trump Organization.

A spokesperson for the committee tells Axios that "we do not discuss the details of witness engagements with the Committee," and that "throughout the investigation, the Committee has reserved the right to recall witnesses for additional testimony as needed, as every witness and witness counsel has been made aware."

Although it's unclear precisely what the subpoena concerns, Axios reports that it's related to Trump Jr.'s "previous testimony before Senate investigators in relation to the Russia investigation." According to NBC News, the subpoena has to do with statements that Trump Jr. made about his involvement in negotiations to build a Trump Tower in Moscow.

Trump Jr. testified before the Senate Judiciary Committee in September 2017, and during that testimony, claimed that he was only "peripherally aware" of the negotiations surrounding the Moscow proposal. In February, however, former Trump attorney Michael Cohen said that he met with Trump Jr. and his sister, senior White House adviser Ivanka Trump, "approximately 10 times" to discuss the project.

The Trump Tower Moscow project has become a subject of intense interest by investigators. According to emails obtained by The New York Times, longtime Trump business associate Felix Sater told Cohen in 2015 that he would "get [Russian President Vladimir] Putin in on this program and we will get Donald elected." Sater later told BuzzFeed News that he proposed giving Putin a penthouse in the tower, although it's unclear if Trump himself knew of this aspect of the plan. According to CNN, Trump's lawyer Rudy Giuliani said, "The President never heard of this and the concept never got anywhere beyond an unfunded letter of intent and never even a proposal or draft contract."

Cohen himself pleaded guilty in 2018 to lying to Congress about the Trump Tower Moscow project (which was never completed). Cohen had told Congress in 2017 that negotiations on the project ended in January 2016 — before the first votes in the 2016 election were cast, but he later said that the talks stretched into June 2016, after Trump was the presumptive Republican nominee for president. Giuliani has since admitted that the negotiations may have stretched into November 2016.

CNN reports that the committee and Trump Jr.'s team have been discussing the possibility of him testifying for weeks. One source told CNN that in response to the subpoena, Trump Jr. is considering invoking the Fifth Amendment or, alternatively, simply refusing to show up for the testimony.