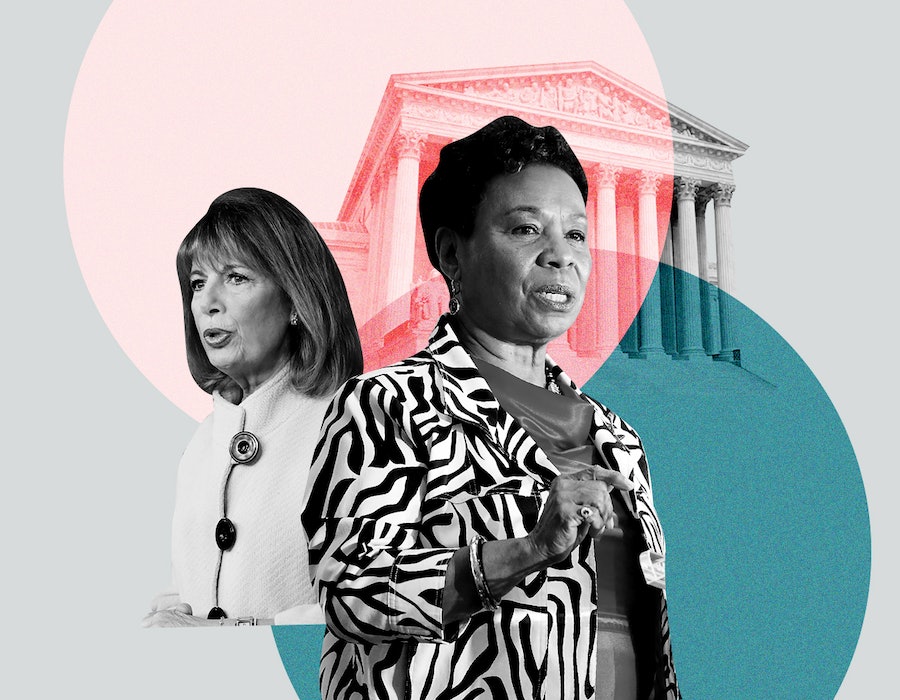 On Wednesday, the United States Supreme Court heard oral arguments in June Medical Services v. Russo. The case is a challenge to a 2014 Louisiana law that imposed restrictions on abortion clinics and providers; if allowed to go into effect, the law would force two of the state’s three remaining abortion clinics to shut down. A virtually identical Texas law was struck down as unconstitutional in 2016, but with Justices Neil Gorsuch and Brett Kavanaugh now on the bench, there’s reason to believe the court might overturn its precedent.

The pro-choice community isn't giving up the fight. More than 25 groups submitted amicus briefs to the court, urging them to strike down the law; one was from 368 legal professionals, myself included, who've had abortions. And while the justices heard oral arguments, demonstrators rallied on the court’s steps. Among them were two of America’s most visible advocates for reproductive justice: Representatives Jackie Speier (D-CA 14) and Barbara Lee (D-CA 13), both of whom have spoken publicly about their own abortions. In 2011, Speier spoke on the House floor about her second-trimester abortion, and in October 2019, Lee opened up about getting an abortion in Mexico before Roe v. Wade. Bustle talked with the congresswomen about the ongoing fight.

You could have been anywhere on Wednesday morning. Why did you choose to be at the Supreme Court?

Speier: This case could, for all intents and purposes, gut Roe v. Wade. The decision could eliminate abortion services for [nearly] a million women in Louisiana, many of them young people of color or from immigrant communities.

Lee: This is a big issue for everyone who believes that reproductive rights are human rights. We’re seeing a constant attack from the right. They keep coming, so we’re going to keep fighting.

For many pregnant people, the decision to have an abortion is painful. For others, it’s uncomplicated. How should we talk about this issue in a way that incorporates the diversity of experiences?

Roe v. Wade secured the right to an abortion. Did the pro-choice movement let down its guard?

Speier: The anti-choice community has been stealthy in its efforts to undermine Roe v. Wade, but it's coming back into our consciousness. I predict that if the court upholds this law, women will be in the streets.

Lee: We have to resist what they’re doing but also put forth our agenda.

Lee: We need fully funded comprehensive sex education. This year’s Trump budget [proposal] is zero for teen-pregnancy prevention programs. We have to strengthen our health care system, and women's health care needs to be part of mainstream health care.

Speier: Access to emergency contraception and contraception without a prescription. I had a conversation with John Lewis after I spoke [about my abortion]. He came up to me and said, "That was one of the most powerful speeches I've ever heard." Then he proceeded to tell me about his aunt, as he referred to her, and how when he was young, his mother brought her downstairs to the car. She was in a nightgown with blood saturated through. She left with his mom and never returned. It was a powerful story that hasn't left me. We're not going back to that. We're just not.

Representative Speier, you decided to share your abortion story on the House floor after Representative Chris Smith shared false information about the procedure. Has the discourse in Congress changed since then?

Speier: We’re seeing more assertiveness on the House side, by members introducing bills to overturn the Hyde Amendment, and providing clear and persuasive language around choice. After I spoke, I had a colleague come onto the floor, hug me, and say, "I had an abortion, but I can't possibly talk about it on the floor." We've got to de-shame it. It's a medical procedure.

My daughter had a friend in college [at] the University of Missouri, who got pregnant. There was only one clinic in all of Missouri, and it was in St. Louis. It was an hour and a half trip, and there was a three-day waiting period and a long line. She was going to have to wait maybe three weeks because of the backlog. Ironically, her anti-choice mother took her to Illinois to get an abortion. You can be anti-choice until it happens to you.

Lee: This is the largest pro-choice Congress [since Roe v. Wade]. Most members want to see us move forward so reproductive health care is seen as a human right. We're playing defense and offense at the same time.

Any thoughts on the upcoming presidential election?

Speier: Donald Trump has been a destructive force for women all of his life. He's a misogynist. He sees women as arm trophies. He delights in demeaning women. Not voting is not an option. Not being engaged is not an option.

More like this
Watch Jacinda Arden’s Devastatingly Honest Resignation Speech
By Sam Ramsden
Jessica Simpson On The Time She Was Pursued By A Backstreet Boy & An *NSYNC Member
By The Editors
At 28, Rosie Perez Risked Her Career To Stop Playing Stereotypes
By Gabrielle Bondi
8 Charities To Donate To During Black History Month
By Alexis Morillo
Get Even More From Bustle — Sign Up For The Newsletter
From hair trends to relationship advice, our daily newsletter has everything you need to sound like a person who’s on TikTok, even if you aren’t.