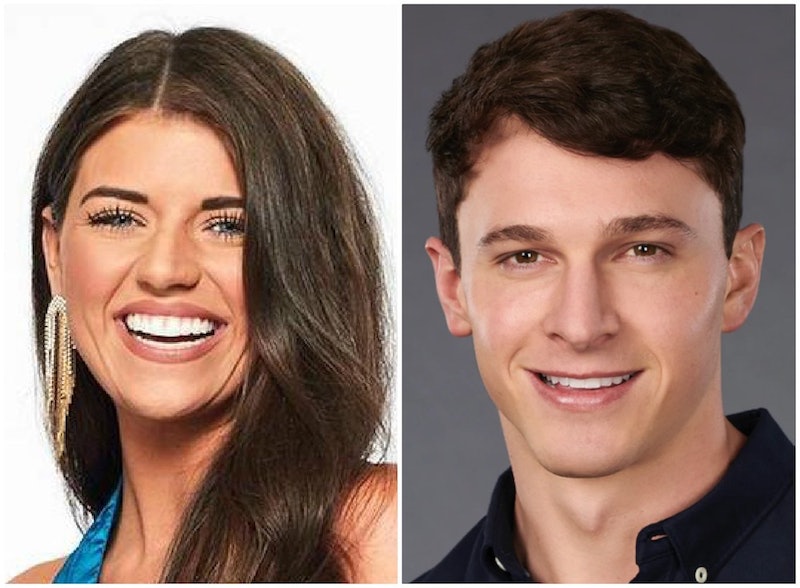 After some prodding from The Bachelorette's Mike Johnson, Connor Saeli sparked rumors that he's talking with Madison Prewett — and it may or may not have been an accident. Mike and Connor, who both appeared on Hannah Brown’s season of The Bachelorette in 2019, went on a joint Instagram Live on Sunday, March 22 to chat while quarantined. Between talking about Netflix and Bachelor in Paradise, Mike asked Connor a pointed question concerning Madison, who appeared in Peter Weber’s recent cycle of Bachelor.

It began when Connor read a fan comment that said, “Connor and Madi, please.” Later, Mike asked Connor if he would appear in Bachelor in Paradise if “a certain individual” joined the season. After a long pause, Connor replied, “Sure, yeah.” The prodding became more specific when Mike asked Connor, “So what’s up with you and Madison, though? You talking to her?” A flustered Connor answered, “Um, I don’t know, we’ll see.” He added, “No, I can’t give you anything.”

However, a source told E! News there's nothing to read into here. "Connor DM'd Madison sending her words of support After the Rose finale. It was purely platonic," the source told the outlet. They said the two Bachelor Nation stars haven't spoken since, and that Madison is "focusing on moving forward with her life by spending quality time with her family."

Madison split from Peter just two days after the finale of The Bachelor on March 10. In the dramatic episode, Peter chose Madison despite his mother’s disapproval and the drama that ensued from it.

They announced their split on Instagram on March 12. Peter thanked Madison for her “patience and unconditional love” throughout the season. “Madi and I have mutually decided to not pursue our relationship any further,” he wrote alongside a photo of himself outdoors. “Believe me this was not easy for either of us to be ok with, but after a lot of honest conversations, we have agreed that this is what makes most sense for the two of us." He added that “the love and respect I have for Madi will continue to endure.”

In her own Instagram post, Madison said she was “incredibly thankful for this amazing journey.” She added, “As Peter and I have decided to go our separate ways, I am confident that we will both move in the direction of our purpose.” She addressed Peter directly and wrote, “You are an amazing guy and I’m thankful for you. I will always be your biggest fan.”

Connor was last linked to Bachelor in Paradise’s Whitney Fransway, but the two split in September 2019. In an interview with Us Weekly at the time, Connor said the breakup was mutual and the two are “definitely on good terms.” As for whether Connor and Madison are linked, fans will just have to hope that future Instagram Lives provide some answers.