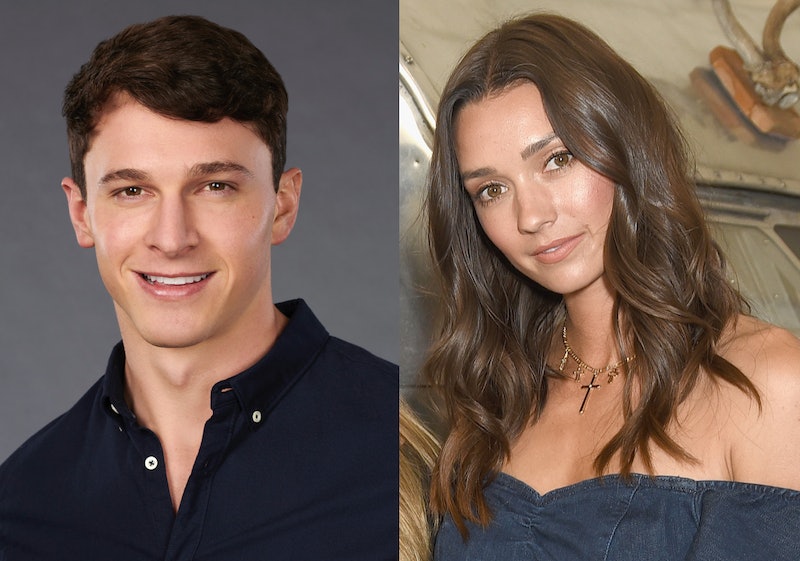 Just as Bachelor Nation was starting to get excited about this particular love story, it's already over. According to People, Whitney Fransway and Connor Saeli split after sparking a connection on this season of Bachelor In Paradise. This might be especially surprising, since just days before, Connor proudly declared they were still dating in the pre-taped BiP finale on Tuesday, Sept. 17. (For the record, that after-show segment was filmed weeks prior on Aug. 27, per Reality Steve.) And making the breakup news even more interesting, it sure looks like Connor and Whitney are on vacation in the exact same spot right now (more on that later).

As for why things ended, Connor told People in an interview published on Thursday, Sept. 19, "We rushed into a relationship. And we realized that we just weren’t connecting anymore." To be fair, he's right. Compared to other contestants who spent weeks getting to know each other on the beaches of Sayulita, Mexico, Connor and Whitney had an atypical love story that came together very quickly.

Here's the short version: Connor attended Chris and Krystal's BiP wedding and then joined the rest of the cast in trying to find love on the beach. There was a brief spark with Caelynn, but ultimately she chose Dean instead. After that, there was only one person Connor wanted to meet — Whitney — and when it didn't seem like she'd actually be coming to Paradise, he decided to leave. In a major example of bad timing, Whitney did show up shortly after Connor left, and she was there specifically to meet him. Luckily, producers saved the day and brought them together to a hotel room to chat.

Things seemed off to a great start, especially since while their Paradise love story aired on Monday, Sept. 10, Connor gave fans an update via Twitter. At the time, he wrote, "It all worked out in the end" with a smiley face, while also explaining his back-up plan for if she hadn't showed up. Connor tweeted, "I was getting ready to send Whitney a dm on Instagram right before she knocked on my door. Just trying to shoot my shot."

Even BiP alum, Evan Bass, tweeted about how much he shipped these two. Considering he's married to someone he met on the show, Evan knows a thing or two about Paradise success stories. He joked about Connor and Whitney's minimal screentime, but made his feelings of support very clear: "WHITNEY AND CONNOR MY FAVORITE PARADISE COUPLE OF ALL TIME (WITH LESS THAN .3 MINUTES OF SCREEN TIME) #BachelorinParadise."

Given how hyped up their love story was, it sure seemed like Whitney and Connor had a real shot at a relationship. They even posted a kissing photo a week prior to news of their split, which was also confirmed by Us Weekly. Even though things are now over romantically, there's a pretty good chance these two now-exes may run into each other on a different Mexican beach. Awkward, huh?

Late on Wednesday, Sept. 18, Connor posted a picture from Tulum. He kept the Instagram caption simple, "Just livin’ life 🏝," but the geotag (Tulum, Quintana Roo) matches one Whitney posted hours prior. Whitney's Tulum snapshot caption elaborates a bit more: "Finally made it to TULUM! It’s been on my list of places to go for a while and I can’t wait to share my experience with you 😊✨."

It's entirely possible that Whitney and Connor's vacay was pre-planned and they decided to set aside any potential awkwardness to explore the beautiful beach. There's another potential explanation: It looks like the trip may be part of some type of brand sponsorship. Whitney tagged the beach villa company Zorba Tulum in her photo, and the brand also later reshared Connor and Whitney's individual Instagram Stories.

Fans will just have to keep an eye on their pages for any updates about whether they spend more time together in Tulum than they did on Paradise. But either way, Connor's breakup quotes sound super practical. And if they are hanging out on the beach as friends, more power to them.

More like this
Everything To Remember About Lace Morris Before 'Bachelor In Paradise' Season 8
By Grace Wehniainen
You Can “Fall In Love” At The Resort Where Bachelor In Paradise Season 8 Was Filmed
By Brad Witter
Where Is Former Bachelor Host Chris Harrison Now & What Is His Net Worth?
By Hugh McIntyre
Every 'Bachelor In Paradise' Couple Still Together After The Show
By Kadin Burnett
Get Even More From Bustle — Sign Up For The Newsletter